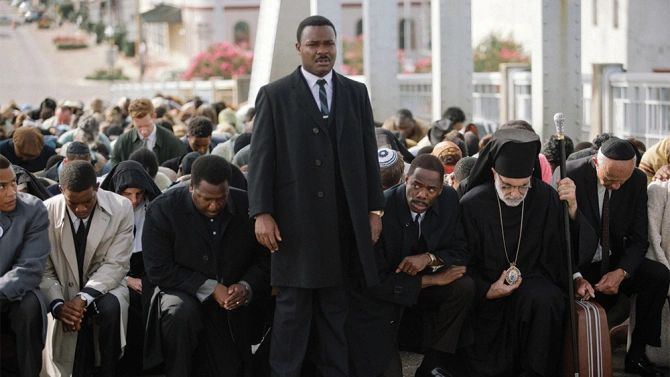 "Selma," a new film that just went wide to screens around the US, is an Interesting film, and for me as a student of the American, as well as the Irish, experiences, one well worth the investment to watch. The film narrates the epic events from March 7 to March 25, 1965, when civil rights activists, led by the Rev. Martin Luther King Jr., marched to secure voting rights for black Americans, but particularly for those in the former Confederacy.

In a scene from "Selma," David Oyelowo as Rev. Martin Luther King Jr., pauses after police withdraw from Edmund Pettus Bridge, seemingly opening the way for them to march unimpeded. Brad Pitt and Oprah Winfrey produced the film and  Ava DuVernay directs. Martin Sheen has a cameo as a judge asked to rule on the legality of the attempted marches.

In two of the film's most dramatic scenes, marchers, of a variety of colors and religious beliefs, assemble on Selma's Edmund Pettus Bridge, to challenge local officials and their police minions, attempting to stem the protesters' civil rights march to Montgomery, the Alabama state capital. In the first of three attempted marches, state police and a civilian 'posse' attacked the marchers, driving them back into Selma as they whipped and hammered them mercilessly. This provided the activists a nationwide audience for the brutality of local and state officials, and the many vocal white citizens who stood by as cheerleaders for their inhumanity.

So as I watched the second and ultimately unimpeded third march set off, with nuns in habits, men wearing yarmulkes, and many whites, of all ages, in the ranks, I thought, 'Were the Irish there in significant numbers?" Certainly, the sisters in the ranks suggested some were? And who were they and what might be their stories? I'd welcome any info on this. As far as the film itself, it is always difficult, it seems to me, to translate historical events into taut drama, with the drama often coming at the expense of historical accuracy. My sense here is that where 'Selma' falls short is its desire to offer both verisimilitude while keeping us fully and emotionally engaged. I found the film a bit 'talky' at times, during the strategy conferences, for example. These interludes are great for historical exposition, I think, but invite the mind to wander as for me the emotional pull lags in those moments. (To view the film's official trailer, follow this link.)

I admit to being disappointed with "Selma," as my expectations were high. The producers have done a masterful job promoting the film and building anticipation, as last night's nearly full screening in Manhattan demonstrates. My hope was that it would become a blockbuster, but I am reminded with this of the immense challenge facing filmmakers who want a particularly meaningful history to find new life and audiences via their work. I hope I'm wrong, but my sense is that the word of mouth may not provide "Selma" with the audiences I think it deserves. -- Ger

Rev. James F. Ryan, a native of Rathluirc, County Cork, seems to be one Irishman who acted against the injustice that surrounded him in the Deep South. From 1968 to 1970, Father Ryan, served as assistant director of the Southern missions, based in Selma, Alabama, for the Society of St. Edmund, according to The Greenwich (Ct.) Day, Jan. 13, 1971.

According to this entry in Wikipedia on the "Selma to Montgomery marches":

"The Society of Saint Edmund, an extremely liberal order of Catholics, were the only whites in Selma who openly supported the voting rights campaign.[8] SNCC staff member Don Jelinek later described this order as “the unsung heroes of the Selma March…who provided the only integrated Catholic church in Selma, and perhaps in the entire Deep South.”[9]

Father Ryan died in 2007, in Selma, Alabama, at the age of 84. Father Ryan, son of James Ryan and Elizabeth Burke, was born on Dec. 11, 1922. He was survived by his sister, Annette Barrett of Cork City, Ireland, his brother, John Ryan of White Plains, N.Y., and his niece, Geraldine Taber of Mystic. (per Legacy.com)

I have not seen the film yet. You are right. i remember the new coverage of the time. It is difficult to portray historical events and keep it on target with the buildup to the event itself.

Gerry one of Dr. King's influences was Frederick Douglas who spent some time in Ireland and who cited as one of his major influences Danial O'Connell.  O'Connell was a tireless opponent against slavery in Britain (two facts sadly forgotten). Im 1829 before Parliment O'Connell famously stated (and realize he was using the language o his times):

“Gentlemen, God knows that I speak for the saddest people the sun sees, but may my right hand forget its cunning and  may my tongue cleave to the roof of my mouth before, to help Ireland, I keep silent on the negro question.”

: “I feel grateful to him, for his voice has made American slavery shake to its center. I am determined wherever I go, and whatever position I may fill, to speak with grateful emotions of Mr. O’Connell’s labors.”

Daniel O'Connell was a hero of his time ; he assisted  all  people who were downtrodden . He was  hated by the British Government ; who called him a thorn in their sides; and yet was pronounced  as a brilliant orator  and the savior of the Catholic people by those who opposed him most in Government

Neil, Daniel O'Connell also created the idea of mass, peaceful demonstrations, what he called "Monster meetings". This idea of peaceful mass protest influenced Mahatma Gandhi who in turn is said to have influenced Dr. King. Here is an article about his history of abolitionism:

One thing I would have to add though is that, like many Protestant ministers of the time, Dr. King may have been somewhat anti-Catholic, and given what Irish-Americans felt for the Kennedys at the time......

Ironically, just after this topic started the local paper ran a story one of the Nuns pictured at Selma; Sister Madeline Dorsey.  She is over ninety, but time doesn't seemed to have quenched the fire that burns inside her