Near the end of my recent trip to Ireland, Wexford maritime historian and writer Jack O'Leary took me down to see the Hook Head Peninsula but I had totally forgotten that the infamous 'Loftus Hall' was on the way so we agreed to stop in on the way back. 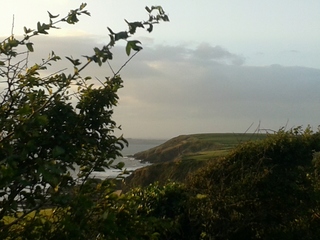 Although there were no indications that anything was going on there the road leading up to the hall was opened so we drove in!  When we arrived at the back of the hall we saw an entrance to a newly built cafe and, although it was obviously still being converted to create a tourist venue, there were others waiting for the next 'ghost tour' to begin.  We had a coffee and some amazing chocolate cake while discovering that we were about to embark on a 'day family' tour but had no idea of what we were in for! While only a few rooms on the main floor are opened, they are still in the same state of disrepair due to many years of vandalism and neglect since being abandoned.  As it turns out we were about to become characters in the 'Mysterious Stranger' ghost story that as been around since the 1700's.  Jack became the 'master of the hall' and I a servant.

Amazingly the staircase is still intact and beautiful but off limits now as they are trying to preserve and renovate from the proceeds of the ghost tours.

We were not allowed to take photos but there are old images and videos online from before this conversion to a 'ghost tour' venue and in July of this year five of Wexford's most promising bands helped to celebrate 'National Music Day' in the Hall.

If you are in Ireland next year around Halloween I highly recommend this tour.  Here is a short 'phone' video of our Loftus Hall discovery

I thought the hauntings stopped when the original structure was demolished circa 1870?

Can't speak to that, Ronan, but not sure spirits, such as they are, are attached to brick and mortar as much to place. I can't praise this narrative and video effort enough, Alannah. Thorougly enthralled by what you've written, stated, photographed and filmed, all of impressive quality!

Thanks Gerry!  This was the quickest of 'quickie' phone vids but I had the experience so I had to post ...just made it on Halloween!   The 'mysterious stranger' story happened a century before the new house was built but it is used as a re-enactment in the 'ghost tour' no one buys that it's just fun.  The room they dressed up as the 'tapestry' room where Ann (the one who saw the devil) was locked up was awful I hated being in that room...they threw in some jibes at the end (always) about people never wanting to be in that room.  The locals know about this house as you heard Jack on the video say he was there when the bikers were using it and he told me that he went to the bar when it was a hotel but no one would stay there and it was rumoured that the staff would not clean the tapestry room.  I have even heard people say that the Sisters of Providence  or Rossminian nuns who owned the hall kept the tapestry room locked.

I also had an experience in the 'chapel'.   The room the 'tour' took us to had been set up as a chapel by the nuns but I hated being in that room too although every room is so creepy it is like stepping into a derelict mansion from 1800's.  I asked what else the room was used for and they said a dining room or anything people who were living there could have used it for.  Then a woman spoke up and asked why the 'stations of the cross' were all damaged and vandalized and then I turned around and looked at the wall behind me and someone had carved all over them.  He said they usually don't talk about it during the day family tours but that during one of it's recent periods of abandonment they had found some kind of circle was being held in the 'chapel' and that is why the heads of the statues were missing.  I have seen reports since researching the hall for this story that many people over many years have felt the same way in those rooms and the long hall you have to go through from the front of the house to the back where the new entrance is to leave the tour.  The servant's stairs come down in the centre of this very long hall and everyone feels how creepy it is.  Regardless I have never been in any building like this before but I kept thinking about all the battles that took place there in the original castle which I read about in the binders available in the cafe before the tour.  Still creeps me out..I told the tour guide to keep his 'SHIELDS UP"!