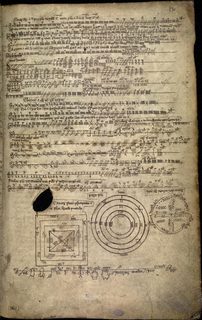 Lebor na gCeart, the "Book of Rights", details the rents and taxes paid by the King of Cashel to various others in Ireland.  The original manuscripts date to the 11th or 12th century, and it contains a treasure trove of references to the customs and practices of Irish nobility in the Middle Ages.  This collection of manuscripts was edited and translated into English by Miles Dillion in 1962, and published for the Irish Texts Society.

The following is an excerpt from Lebor na gCeart, section VI: Recount the rights of the king of Tara which gracious Benén has told; what is due to him at Tara has been memorised by a Latin scholar.

The fair king of the realm of Brega is entitled to twenty horns, twenty swords, twenty hounds, and twenty slaves as stipend from the king of Tara.

The swift king of Laegaire is entitled to ten sturdy horses in his tribe land, ten slaves, ten full-grown women, ten hounds, and ten horns for the drinking-feast.

The stipend of the noble king of Ardgal is seven shields, seven horses from Scotland, seven full-grown women, seven slaves, and seven hounds.

The king of Coill Echach is entitled to seven strong horses from the king of tribes, seven swords for battle, seven horns and seven coloured cloaks.

The king of Curcne of the fen is entitled to six shields, six horses,six cloaks, six slaves,and six horns for ready service.

The stipend of the king of Uí Beccon is five horses that are fast away,five brilliant cloaks of lasting colour, and five swords for battle.

The king of Coill In Ollaim is entitled to five shields, five horns for his treasure, five horses brought in well-laden ships, and five worthy woman slaves.

The king of festive Delbna is entitled to eight swords, eight shields from across the sea, eight horses with slender legs,eight slaves, and eight slave women.

That is the tradition of the kings of Tara — not every prattling bard can tell it — it befits not the bard but only the file to know the rights of every king."

Check out more Wild Geese content about the history of Ireland.

Oh to have been a king in those times! Congratulations to Miles Dillion for what must have been both an arduous and rewarding endeavour.

Oh dear, though. They kept slaves.  Still, I suppose the practice was widespread back then.