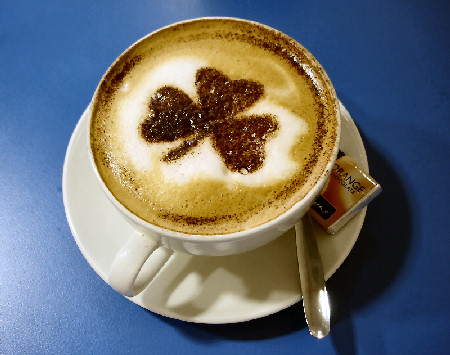 When International Coffee Day came and went at the end of September, it got me thinking about the odd coffee culture here in Ireland.  Why do I call it "odd"?

I'm an Irish-American now living in Ireland -- I call myself an Irish-American-Irish. :-)  Having spent my 20s and early 30s (what I might call my "formative coffee years") in America, I was exposed to the "specialty coffee" culture which has existed there for the better part of four decades.  I have been "into" coffee as a hobby since my college years, but the single biggest factor in my pseudo-obsession with the art and science of coffee came into play when my dad decided to open up a coffee house / bakery several years ago.

The coffee side of it was surprising, given that he's never imbibed a single cup of "Joe" in his life.  His forte is in the bakery side of things ... and I suppose the coffee part was just a good marriage of tastes.  My dad is very much a subscriber to the maxim, "Anything worth doing is worth doing right."  Thankfully, he's passed that onto me.  Given this outlook, he wanted to be sure he educated himself and his employees on the cutting edge of the speciality coffee culture.  This meant sampling the products from quite a few micro-roasteries across the country, and even hosting a focus group to determine which beans had the most universal appeal.

After selecting the roaster he'd be working with, he set out to find the very best in equipment for grinding, dosing, and brewing the coffee.  He spared little expense, and what resulted was a positively magnificent cup of coffee -- done up any way you like it (straight espresso, Americano, cappuccino, latte, drip, French press, etc.).  In all this pursuing of excellence, I learned alongside my dad and his employees about what really makes a fine cup of coffee.

Unfortunately (and perhaps fortunately in some ways), this process made me a true "coffee snob."  It's a two-edged sword, indeed, but it's a moniker I don't deny.  I'm not cruel about it, but I will not bother drinking anything that's not a proper cup of coffee according to the standards I've learned over the years.  Like anything, when you train your taste buds and your olfactory to a certain standard, nothing else will do.

With that background out of the way, I wanted to take a brief look at coffee culture here in Ireland.  Perhaps I should say the lack of coffee culture, because Ireland still lags well behind many other countries when it comes to coffee shops and coffee roasters who offer a truly excellent product.  In fact, I can count the number of coffee roasters who properly roast their beans (i.e. not to the point of making charcoal out of them) on a single hand ... with a couple fingers to spare.

In terms of retail coffee shops, I have encountered very few which serve a "proper" cup.  I know of a small handful in Dublin (send me a private message here if you want their names), but outside of those, I have yet to encounter any shopfront where one can acquire a truly excellent product, if even passable.  I know ... I'm just a coffee snob.  But again, this is where the maxim above comes in: "Anything worth doing is worth doing right."  It seems innovation in the world of coffee both started and stopped on that stormy night at Foynes Airport in County Limerick when the first "Irish Coffee" was served.

I order my freshly roasted coffee beans mainly from two great roasters in the mainland U.K.  Being proudly Irish and wanting to support local businesses, I would much rather buy my roasted beans from a roaster here in Ireland.  But I've come away consistently disappointed almost every time I do that.  I've now started roasting some of my own beans in small batches at home, which will give me greater control over extracting just the right taste to suit my palate.  On a positive note, I have been told that one of those "proper" coffee shops is even now setting up their own roastery and will begin selling their own freshly roasted beans at the beginning of 2014.  I have high hopes for that.

So what's the deal with the lagging coffee culture here in Ireland?  Why haven't things caught up to much of the rest of Europe?  I came across an extensive study done by Bord Bia (the Irish Food Board) which breaks down the preferences and tendencies of coffee consumers in Ireland.  Just about anything you want to know on this subject can be found in that report.  What I see when browsing through the data in that report is a population who has not yet been exposed to much of the "gourmet" side of things when it comes to its coffee.  This is interesting to me given how far Irish cuisine has come -- leaps and bounds.  Why has coffee not come along for the ride as well?

I think at least part of the answer can be found in the incredible prominence of tea in Ireland.  We're among the leading nations of the world in tea consumption per-capita, with some sources even placing Ireland atop that list.  I think this has impeded the introduction of a great coffee culture in this country.  Plenty of people drink it, though, so why is there such a dearth of knowledge when it comes to identifying a sub-par coffee beverage when we have one?

I'd love to open a top-notch coffee roastery and café here in Galway (or at least manage one for someone else), but I'm left wondering if the palates trained with charred beans and poor brewing techniques would appreciate the difference.  I think we're seeing small, incremental progress here in Ireland, but how much further will it go?

I'm including an interesting info-graphic on the history of coffee making around the world created by Datadial for their client Wild Card.  It includes a handful of interesting statistics, including the number of cups of coffee made consumed every five minutes throughout the world ... more than 2 million!  Are you a coffee connoisseur?  If you've been to Ireland and tried the coffee, what were your impressions?

Take four cowboys from the American West and serve them tea with breakfast. "Oh for a decent cup of coffee" was an oft heard lament on our first performance tour back in 2005. Several B&Bs at which we stayed did provide a french press set-up, which provided passable coffee. However, most provided "crystals". instant coffee is NOT coffee.

The second tour in 2006, Folgers had just introduced Coffee bags, which one of my partners determined good enough to bring over in his suitcase. Not a good idea unless you want your suitcases artfully rearranged by baggage handlers, customs officers, whomever has that duty when the drug dogs alert on a luggage piece.

I am always on the hunt for an excellent cup of coffee and oft disappointed. Having been deprived of good coffee for two weeks during my two week trip in 2011, I even broke down and drank Starbucks coffee, which isn't good coffee

Interesting! When I studied at TCD circa 1974 one of the edgiest spots in Dublin was Captain America's, which offered the only decent hamburger in Ireland. I can't recall if I drank the coffee there, it wasn't a big focus for me then, I'm left to guess. I just remember the American style ambiance and the burgers, milk shakes and sodas.

I agree, Bit.  Starbucks has the same charred style of roasting as Ryan mentioned.

Fascinating post Ryan, you are indeed a man of many talents and interests! Thank you, Bit for a wonderful comment, and a superb parting shot :-)

great post Ryan.! Bewley's was my introduction to coffee back in my Trinity days. I guess I'm spoiled because I'm able to bring back Jamaican blue mountain coffee , have great friends there who are roasters and grow the best coffee.! Owned by an English ex-pat., his son runs it now. And the 2nd. best, country traders, is also owned by an Englishman..go figure.! The Japanese buy 90% of the crop, and their main plantation is called..Dublin Castle.http://www.gourmet.com/magazine/2000s/2003/07/bittersweet

Great article, Rob ... thanks for providing the link.  Sad story about the murder, though.  As far as the coffee goes, that's some interesting information.  I've tried pure Jamaican Blue Mountain only once, and really liked it.  It's not something sold by any of the roasters I buy from, but maybe I can get my hands on a small amount of the raw beans and roast them in my own small batch roastery setup.

Gang, just a reminder, please help fellow members identify and access the best products and services related to the Irish experience in this thread. We also want to encourage these brands and providers by sending customers their way. Rob, Bewley's would seem to be a great choice for a coveted 'Mullally' endorsement there. GRMA.

thanks Ryan...I was at Mark's wedding, and it really hit home. Almost impossible to get green beans, have to be an accredited roaster with the coffee board. Next time I'm 'back-a-yard' I will bring some back for you. Question...I use a French Press to brew my coffee, so did Alex Twyman...best method.?

I've really enjoyed this discussion. We can be a bit snobby with our coffee, but we'll take a Starbucks if that's what's available. The deepness of the brew is most important to us.

We actually tend to be far more snobby about tea.

Rob ... the French press is a good brewing method, yes ... as long as you have the technique down.  Grind coarseness is hugely important for press pots, as is immersion time.  Have you ever heard of the Chemex?  It's drip brewing, only it gives you more control over the brewing process.  I us the Chemex exclusively now when I want a cup of filter-brewed coffee.  The Aero Press is also a nice option to have.  Been doing almost exclusively straight shots of espresso recently, though.  Really can't beat just a straight double shot, as long as the beans are fresh and the grind is spot-on.