Joseph Mary Plunkett (Seosamh Máire Pluincéid) is one of the least known leaders of the 1916 Easter Rising. He is perhaps one of a the few people that Seán Mac Diarmada trusted in the planning of the Rising. Born in 1887 into a very affluent family, he lived in one of Dublin’s most influential neighbourhoods: Fitzwilliam Street.  They also owned a farm in Kimmage, South Dublin. His father was a papal count, and they traveled widely. At a very young age he contracted tuberculosis and spent a lot of time in the warmer climates of Mediterranean North Africa. His mother never wanted to believe that he was as ill his diagnosis would indicate; trusting that time spent in warmer climates would cure him. Tuberculosis would define his whole life and leave him a very weak child and adult.

He was educated in England in early childhood, then in the Jesuits' Belvedere College, Dublin, and later at Stonyhurst College, Lancashire: a very expensive and elite school. This is where he would acquire some military knowledge from the Officers Training Corps. After Stonyhurst, he returned to Dublin to study at University College Dublin and graduated from there in 1909. Due to his life-long illness, he spent two years traveling in warmer climates after he graduated. Plunkett's interest in Irish nationalism spread throughout his family, notably to his younger brothers George and John, as well as his father.  Mr. Plunkett allowed his property in Kimmage, South Dublin, to be used as a training camp for young men who wished to escape conscription in England during World War I. The men that went there were instead trained to fight for Ireland.

In the planning stages of the Easter Rising of 1916, armory was brought to Howth by Erskine Childers, a Royal Navy Officer and an Irish Rebel), his wife Molly, and Sir Roger Casement on their Pleasure Yacht, the Asgard. It is said that there were some 900 Mauser M1871-11mm calibre rifles and 29.000 rounds of black power ammunition off-loaded at Howth Harbour. Simultaneously, a smaller number of Mauser rifles were landed at Kilcoole, Co. Wicklow, further down the coast from Howth. These were unloaded by Sir Thomas Myles, Tom Kettle, and James Meredith. These were all professional people: barristers, politicians, and surgeons.  The men were all known to the inner sanctum of the Irish Military Brotherhood. It is no surprise then, that all of this armory was stockpiled at Plunket’s family farm in Kimmage, to be used for training of the Volunteers.

Throughout his life, wherever he was studying, Plunkett took an active interest in Irish Culture and the Gaelic language. He was a co-founder of the Esperanto League where he would meet his fellow peers and comrades of the 1916 Easter Rising. He would become lifelong friends with Patrick Pearse and Thomas MacDonagh. Plunkett shared both Pearse and MacDonagh's enthusiasm for literature, poetry, and a love of Ireland. MacDonagh tutored Plunkett in the Gaelic language. Their dedication to the cause of Irish culture, language, and independence out-weighted any risks that they could envision on the horizon.

Along with MacDonagh, Plunkett helped found the Irish National Theatre, and was also an editor of The Irish Review.

He joined the Irish Volunteers, and subsequently gained membership to the Irish Republican Brotherhood. Having gained the trust of the inner sanctum of the Irish Military Brotherhood, during the planning of the Easter Rising he was sent to meet Roger Casement (a British Diplomat and an Irish Rebel) in Germany. Casement was there negotiating with the German Government on behalf of Ireland. Casement's role as emissary was self-appointed. As he was not a member of the IRB, the organisation’s leadership wanted to have one of their own trusted members (Plunkett) to negotiate for German aid. Plunkett was seeking to gain a shipment of arms. His skilful negotiations and charismatic demeanor enabled him to secure a promise of at least one shipment of German arms to coincide with the Easter Rising of the following year.

Having completed this task successfully, Plunkett returned to Ireland jubilant with the promise of at least one shipment of arms. This success led him to be appointed as Director of Military Operations, with overall responsibility for military strategy, though his health prevented him from being terribly active by this time. He, along with Thomas Clarke and Séan MacDermott, was heavily involved in the planning of the Easter Rising.  Plunkett’s health worsened a week prior to Easter, and he had to be hospitalized. He underwent major surgery on his neck glands days before the Rising. Against all medical advice, he struggled out of bed to take part in what he would describe as the frustration of all the secret planning: The Easter Rising. Still bandaged, struggling to cope with the pain, he took his place alongside all of the leaders, the Volunteers, and Cumman na Mbann in the General Post Office. Plunkett was ably assisted by his energetic ‘aide de camp ‘ (a military officer acting as a confidential assistant to a senior officer.) This assistant was none other than Michael Collins, the icon of Irish independence history.

As gunfire and mortars rained down on the General Post Office in Dublin, the leaders held their nerve and fought like for like with the British Military. It was only when fire swept through the GPO that the command was given to evacuate the building. The troops burrowed down in accommodation nearby to discuss their next strategic plan of action. The majority view was that they should surrender to save the lives of the ordinary civilians being wounded and killed.

Upon their surrender, Plunkett was immediately arrested and taken to Kilmainham Gaol. He was subsequently court martialed and sentences to death by firing squad. At his court martial, he pleaded not guilty to the charges (taking part in an armed rebellion that was prejudicial to the Defense of the Realm and his Majesty, the King.) His oath of allegiance was to an Independent Ireland.

"I have nothing to say in my defense, but desire to state that the proclamation referred to by Sergeant Burton's evidence is signed by persons who are not connected with the Irish Volunteers, and the proclamation was not issued by the Volunteers."

He was found guilty and sentenced to death by firing squad . 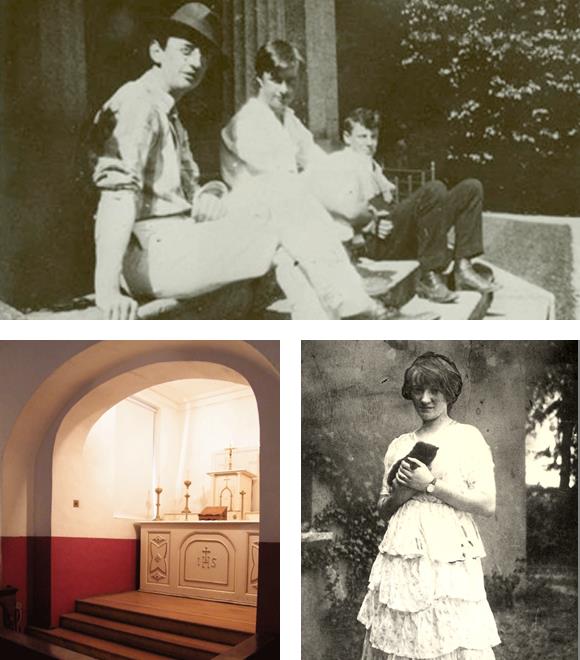 The Chapel in Kilmainham Gaol where Plunkett /Gifford were married; with his brothers at home in Dublin ; Grace Gifford

At 1:30 AM on the 4th of May, 1916, Grace Gifford was led into a small chapel at Kilmainham Gaol.  Gifford was Plunkett’s girlfriend; a protestant convert to Catholicism. Plunkett was led hand-cuffed to meet her at the altar. The Chapel was lit by candles, as there was no electricity.  The marriage ceremony was conducted by Fr. Eugene MacCarthy, and attended by twenty-two British Soldiers with fixed bayonets, lining the walls of the small chapel. Grace Gifford had bought a wedding ring the previous day. Plunkett was taken away immediately after the ceremony's conclusion. Grace Gifford's sister Muriel was married to Plunkett’s best friend, Thomas Mac Donagh .

Somewhere during the night, leniency was granted to the newly married couple. They were allowed to spend a little time together before he was taken to Kilmainham Stonebreakers Yard at the rear of Kilmainham Gaol.  At dawn, he was blindfolded and executed by firing squad.

In the Irish Times of Friday 5 May, 1916, there appeared the following marriage notice:

"PLUNKETT and GIFFORD - May 4th, 1916, at Dublin, Joseph Plunkett to Grace Gifford."

Joseph's brothers, George Oliver Plunkett and Jack Plunkett had joined him in the Easter Rising, and later became important Irish Republican Army men. George was sentenced to death for his part in the Ester Rising, but only served one year in confinement before he was released.

His father's cousin, Horace Plunkett was a protestant unionist who sought to reconcile unionists and nationalists. Horace Plunkett's home was burned down by the Anti-Treaty brigade during the Civil War.