Rocker Larry Kirwan, the founder and front-man of Irish rock mainstay Black 47, had a close-up perspective on the mayhem of 9/11. He shared the following reminscence of that day with subscribers to the band's newsletter in 2006. (Kirwan mentioned to readers that the excerpt is based upon a chapter from his memoir, "Green Suede Shoes.") As oral history, it is raw and immediate -- like its subject. While songwriter, author and playwright Kirwan is rarely at a loss for words, the excerpt displays his struggle with the day's traumatic events. Groping for words to make sense of the unreality, he paints a vivid portrait.

"I'm usually not lost for words but, in this case, words don't seem to do justice. It's been exactly two weeks now - to the hour since the attack and yet I stopped writing a moment ago, and had to restrain myself from running to the window, when a low flying plane passed overhead. I live quite close to the World Trade Center and was having breakfast that morning when the first plane droned ominously by. It seemed so unusually close that I actually ducked my head and waited -- for what I don't know. A couple of seconds later, there was a sickening thud -- very unlike the screech and tearing of crashes in movies -- more like the sound of a sledgehammer hitting thick concrete.

"It was a beautiful morning, the sun splitting the rocks, as they say, and when I went downstairs, people were shading their eyes, looking up past the rooftops but no one seemed to know what had happened. On the roof of my building, which is five stories tall, it was a different story. It was, indeed hard to take in the sight, much less process it -- a gaping hole about 2/3rds of the way up the Westward tower, ugly black smoke pouring out, and within small tongues of flame licking away quietly at the darkness. At the time, of course, we all assumed that some small plane had lost control and swerved into the tower by accident. Some minutes later, however, we were rudely disabused of this notion, when the second plane hit the Eastward Tower. "As I was looking downtown from the North, I did not see the impact as you would have witnessed it on TV. There were no flames, just another gaping, smokey hole and then a confetti of glass and paper seemed to explode outwards and hang in the air around the two buildings. I ran downstairs and brought back up a pair of high-powered binoculars. I trained these on the Eastward building, praying that I wouldn't see any falling bodies. But large black pieces of debris were sailing through the glassy confetti. Suddenly, a cloud of brown smoke and dust erupted and the building began to collapse to the ground in an almost orderly but surreal manner. So much so, that I couldn't believe my eyes and put down the binoculars. But, unfortunately, it was no mirage. The building disintegrated downwards in a couple of awful seconds and a great cloud of smoke and dust arose, to my mind, almost like a shroud. People were screaming on all the rooftops. A number of women cried hysterically, most of the men cursed loudly in anger and disbelief. There was a general state of shock.

"All around, the city seemed paralyzed. It was as if time stood still. Everyone assumed that the building had been blown up by bombs placed in the basement; there was a general feeling that these unidentified bombers were invincible and could do as they would with the city.

"I stayed on the roof for another couple of minutes trying to piece together any thoughts and emotions that I might have had, but everything seemed utterly changed, and I don't mean just the purely physical. The Westward building was still standing but it looked violated. In truth, I suppose we were all violated. I got the distinct, sickening feeling that the gaping hole in that tower was like an ugly smoking wound that would not be healed. There was a general panic in the air and a feeling of "what's coming next?" As I trained the binoculars on the tower, it seemed so close, and we on the rooftops seemed particularly vulnerable -- my building is about 1,200 meters from the WTC. I had an awful premonition that the remaining tower would explode outwards and this time shower us with the glassy confetti (wrong, as it turns out), and so I went downstairs and watched on TV, as the second Tower collapsed in the same sickeningly neat manner. 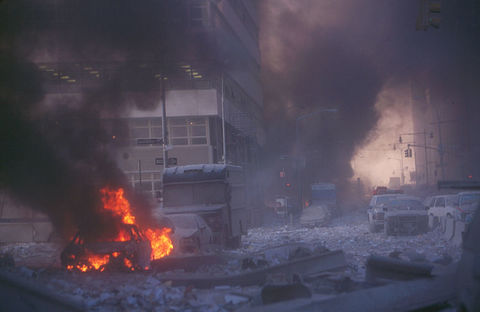 "It's very hard to put into words the feeling of vulnerability in the next hours as rumors, both true and false, flew around the city: new planes were headed in for more attacks, the tunnels had been booby trapped, the "bombs" contained biological and germ warfare devices, etc. And then soon after, Air Force jets banked over the city, causing widespread panic before they were identified.

"I headed down onto Canal Street and decided to walk towards the WTC area, knowing that it would be blocked off within hours. People were streaming up Broadway, dazed and glassy-eyed, some formally dressed, some in casual attire, but most with a covering of a fine white powder. After 5 or 6 blocks, however, the smoke and dust became too dense and I turned back and watched emergency vehicles speed down Broadway, while a mass of shocked people streamed up towards Canal Street.

"I can only recall a couple of details. A Glasgow Celtic supporter told me that he had permission to show up an hour late for work, because of a domestic crisis, and thus had been saved. And the sight of a large black man, whose shirt had either been blown off or removed. He must have been about 6'4"and he was covered from head to toe with that fine white dust. He was moving up Broadway with a purposeful stride. I looked in his eyes. There was no shock -- just a fierce, but calm, determination to get home, get out of that area, get back to some kind of sanity. I watched him until he faded off into the distance of Broadway.

"This city is in a state of shock that I have never seen before. There is a mass depression in the air. No doubt, that underlying cockiness and confidence, particular to New York, will return, but it's absent right now. And yet, everyone is picking up the pieces admirably, trying to attend to day-to-day business. Everyone has lost someone or knows someone who has lost someone. Our brave firefighters are decimated. Our police force and emergency workers have taken a fierce hit. And what can you say about all the regular, innocent New Yorkers whose lives were destroyed on a beautiful morning in their workplaces? So many gone but we will never forget them.

"This city will continue to pick itself up, get on with the business of living and become itself again, but there will exist in all of us a small dark cloud that will forever raise its niggling head, down all the joyful moments in the years left to us." -- Larry Kirwan, www.black47.com