NEW YORK, Oct. 11, 2001 -- It was, literally, an uplifting image, one that drew laughter from many of the hundreds at a memorial service for Franciscan Friar Mychal Judge, slain in the terrorist attacks at the World Trade Center on Sept. 11.

One of the speakers suggested that "Father Mike," as most of the more than a dozen who spoke called him, may in fact have been "working the door" at heaven in the minutes and hours after his death. In this scenario, Father Judge, holding St. Peter's ear, put in a good word for each of the thousands that sought entry after the terrorists struck.

"He's OK!" "Yea, I know her," "Good man, there," Judge would nudge the celestial bouncer till the horde somehow all entered into paradise. The image drew smiles from those who experienced Judge's legendary ability to affirm others. But these laughs, as heartening as they were, only temporarily assuaged the grief of those many friends he left behind.

The pain of Judge's loss cut across this city's mosaic, on display here in the Irish-style "Month's Mind" service in Good Shepherd Chapel in General Theological Seminary.

Among those offering witness was a recovered alcoholic, a retired city firefighter who turned his life around after a talk with Judge; a woman whose brother died of AIDS, who found Judge the only cleric willing to officiate at a memorial service for him; a woman whose daughter died in the 1996 crash of TWA Flight 800, when Judge spent 12 hours a day consoling the families of those killed; a fellow Franciscan; and activist Brendan Fay, the organizer of the Queens St. Patrick's Day Parade. Author and raconteur Malachy McCourt served as master of ceremonies.

Judge supported the Queens Saint Patrick's Day Parade, which welcomes gay groups, unlike the main event in Manhattan. He even came to a recent parade in his brown Franciscan robes.

A fellow Franciscan priest told the rapt audience that Judge shared that he was gay when the priest, a much younger man, struggled to reconcile his vocation with his homosexuality.

Clearly, silver-haired Father Judge, by all accounts a genial man with a broad sense of humor, had many admirers and friends, as well, in the tradition-bound, conservative world of the FDNY. He served as the department's Catholic chaplain since 1992. Perhaps, serving as a bridge across this cultural divide was Judge's greatest accomplishments. Cultural -- if not political -- conservative and liberal Irish-Americans, both in evidence here, agree on precious little in New York. Tonight they shared their grief.

Judge was born on May 11, 1933, in Brooklyn, the son of two Irish immigrants from County Leitrim, and was ordained a Franciscan priest in 1961. The back of the program for the service included this excerpt from a letter he wrote dated Feb. 25, on the 40th anniversary of his ordination: "And the future? As on ordination day, only God knows, and he will reveal only what I need to know and to do each day. It will be wonderful -- that's the way God is." This is in keeping with what one speaker said was one of Judge's favorite expressions: "Stay out of tomorrow. God hasn't created it yet."

The friar died after debris falling from the World Trade Center twin towers struck him in the head as he gave the Last Rites to a firefighter. In turn, Judge received the Last Rites from a young city police officer, who in dress uniform, told the audience how he struggled to find a priest for Judge in the chaos after the attacks, only to be told at nearby St. Peter's Church that none were available. The officer returned to Judge, held the priest's hand, and prayed as his life ebbed.

During the service, as darkness descended outside the entrance to the Episcopalian seminary in Chelsea, a gleaming red FDNY fire engine was parked, a tribute in its own right.

Seats were hard to come by in the first hour of the service, which drew several hundred.

Lorcan Otway sang his new paean to the FDNY, titled "Remember Their Passing." Mary Courtney and the Irish traditional group Morning Star performed from the altar, alternating with clusters of speakers, featuring voice, fiddle, tin whistle, and squeeze box. During the group's rendition of "Hector the Hero," the acrid odor from the still-burning embers at Ground Zero wafted into the chapel from three miles away. Years from now, that odor will forever trigger powerful memories for all New Yorkers. 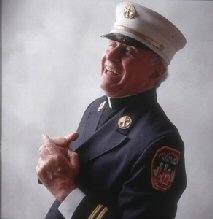 Judge had a keen interest in Ireland, it is said, and former New York police officer Steve McDonald, paralyzed in 1986 when shot in the line of duty, accompanied him to Northern Ireland. Sinn Fein's Gerry Adams was among those who sent his condolences, having met Judge.

Judge seemed inexhaustible to those who knew him. His fellow friar recalled that Judge was the only person he knew that burnt out an answering machine every year. "It glowed," he said, and laughed when he recalled Judge telling him to "Slow down."

Adding to the picture of Judge, someone recalled that no matter how cold the weather, Judge would never wear socks under his Franciscan cowl.

Judge was one of the few priests who ministered to people with AIDS in the early '90s, recalled one man. Judge came to comfort the man's companion, who was dying of AIDS. After giving him Communion, Judge gently lifted the man out of his wheelchair, and embraced him.

Those who spoke, many of them presumably strangers to each other, created a portrait of a selfless man, who made each of them feel special. They took some comfort in realizing that Father Judge lived -- as he died -- relishing his vocation and passionately serving others.

Well! One sign of inspired writing is that whoever reads it is changed for the better through the reading of it. Bravo and thank you.

Thank you Gerry for sharing this. It's truly inspirational.