New York -- The five members of the Irish acoustic band Lúnasa play at venues large and small all over the world, so little wonder they turned in a fantastic performance with fans seated around them at café tables. They transformed the space, as remarkable performers are wont to do, not the other way around.

Lúnasa are known for their prodigious touring schedule, and added two performances last week at Lincoln Center’s David Rubenstein Atrium to their most recent pass through Manhattan. As part of the Target Free Thursdays concert series, the shows were played to a packed audience. The music was predictably excellent, and the band, with consummate ingenuity and professionalism, made the cavernous atrium, with its angles and colored lights and sandwiches from ‘Wichcraft, a boisterous, loud, joyous place, more akin to experiencing them in a seisiún than an impromptu concert hall. It’s testimony to how much fun they create.

The band is currently comprised of Seán Smyth, an All-Ireland champion on both fiddle and whistle who hails from County Mayo; Trevor Hutchinson, on stand-up bass, from County Tyrone; Ed Boyd, from Bath, England, on guitar; County Clare’s Kevin Crawford, born in the UK to emigrants from Clare, on flutes and whistles; and Armagh native Cillian Vallely, now living in Sunnyside, Queens, on uilleann pipes. 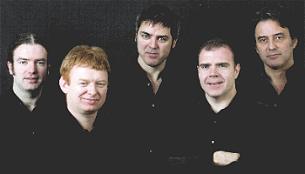 The band members have been playing Irish traditional music for years, with different world-renowned bands, but when they come together, it seems as though each learned music in order to complement the others’ efforts. If Lúnasa has a “front man,” it would appear to be Crawford, who cracked jokes and introduced each song, but that sense of leadership fades into one of seamless collaboration as soon as Crawford puts down the microphone and picks up a whistle.

The set for last Thursday’s performance kicked off with a march, a battle hymn that Crawford told the audience was written “to commemorate a battle between my wife and myself.” That segued into an American fiddle tune “poached from Tim O’Brien” when they toured with him in Japan (Lúnasa has a huge following there), followed by a Highland bagpiping song. Lúnasa hit all the classic notes of what a general audience expects from Irish traditional music in the first several minutes of playing, and it was enough to rouse the atrium crowd into a bit of toe-tapping and prompted clapping for the rest of the set.

“We take our music seriously but we don’t take ourselves seriously.” -- Lúnasa front man Kevin Crawford

The first set moved effortlessly through a sampling of the band’s wide repertoire, from “slip jigs” to a tune in bracing ⅞ time signature. (Crawford quipped that he used to have to play that one “with one shoe off” to account for the odd timing.) They also played several songs in the British musical tradition -- Crawford explained that the band was greatly inspired by British music in the ‘80s -- and several numbers from their forthcoming album, which they recorded with the RTÉ Concert Orchestra, one of Ireland’s only two full-time professional orchestras, which truly showed the band’s virtuosity.

With only five instruments onstage, Lúnasa were able to create an incredible feel of orchestral build and drama, without the pretensions that one may associate with classical music. In fact, one of the band’s greatest collective talents is their ability to pull off technically difficult and precise music with a casual, fun air, almost as if the five met for the first time with their various instruments at a pub and joined together spontaneously for a session.

“A lot of that is intentional,” said Crawford after the first performance, as the band relaxed, restringing instruments and sampling the whiskey that was offered between sets. “We take our music seriously, but we don’t take ourselves seriously.”

After a number featuring just fiddle, guitar and double bass, they launched into a heck of a closer with a number called “The Last Pint,” written by a French guitarist who came to Ireland, as the story goes, to find great musicians, only to discover that, because he arrived in March, all the great Irish musicians were touring elsewhere. The tune starts slow 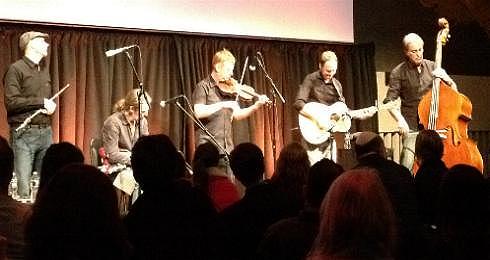 and sad, lamenting that last pint as if it were truly the final drop of beer ever to be poured, and builds into a smashing celebration of all that is Irish music.

Lúnasa has been playing and recording music in one form or another since 1997, and have easily earned their reputation for being the best Irish traditional music band in the world right now. But it’s not just their musical prowess and years of combined experience that makes them great; it’s also their obvious ability to draw joy out of every note, to make an audience in a wide hallway feel as if they’re crammed happily into a pub somewhere, drinking it all in. Part of that must be owed to the sense that none of the band’s members ever stop musically growing.

“In Irish music, you always have something going on,” said Crawford. “It mightn’t be a commercial project, but when you go home, you always have a network of people you play music with, [even] with a seisiún, an informal kind of sense, just getting together and playing tunes.” WG

TO CATCH LÚNASA: Visit the band’s web site to track upcoming performances, at http://www.lunasa.ie/lunasa-tourdates/.  Tonight the band performs at Syracuse, N.Y., at the Palace Theatre, before moving on to Montana and Wyoming.