Is Your Brew Good Enough for St. Patrick? I'm no beer aficionado, but I have had a few in my day, and I can tell you, the goings-on in the craft-beer industry is pure craziness. On St. Patrick's Day maybe I'll have only one, but it better be something that tastes like beer, not that acrid, bitter, throat-scorching stuff many hail as “craft beer.” Now I know I suspect I’ll be outvoted by some, but in my opinion, those craft beers are so typically "hoppy" and sour, I can't understand how anyone could quaff them. Despite this, the craft beer industry is exploding, and it appears that it is here to stay. As I said … INSANE!

The craft brewers are experiencing an identity crisis, for sure -- a size evolution. I read one article that referred to what's happening as the "wine-if-ication" of beer. Beer is being bottled in 750 milliliter bottles (the same size as your average wine bottle) with a price tag of  $30.00!  I'm sorry, but if I go out to have a nice dinner, the last thing I want to order is a $30.00 brew that disguised as a bottle of wine.  Even at home, opening such a brew just not the same as uncorking a bottle of wine. First of all, you can't re-cork it and have it manana. Nor do I want to sit around drinking "deuces.”

Oh, and did I mention they're pricey? Not just the wine-sized bottles, but if you are planning on buying a six-pack, a bomber (22 oz.) or a jeroboam (30 oz.), well, let's just say you better dig deep.

So, are you a traditionalist or a trendsetter? Irish beers have stood the test of time. There are several top rated Irish beers, and we're going to take a quick look at a few of them.

Wager on the Lager: I'll start with my favorite, which is lager, and I'll go for Harp Lager every time. It's carbonated, effervescent and refreshing. Now that's how a beer should taste!

Now Come the Stouts: I don't know about you, but I don't want to eat my beer with a spoon. That's why I don't really 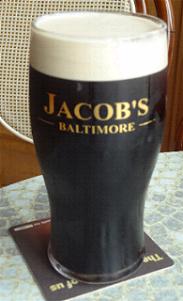 care for the heavy, thick consistency of Guinness.  It's faintly chocolatey and very foamy. It's known as a beer that's a meal, and I can see why it got that handle. Three cheers for those Guinness lovers out there, but it's not for me.

Beamish Stout has been brewed using Beamish yeast since the 1700s. It is very similar to Guinness, but imagine it being lighter, with a coffee and caramel twist.

Murphy's Irish Stout is another Guinness "wanna be," but considerably lighter. For those of you who want the stout experience, but are a little timid, Murphy’s may be your best bet.

‘Ale, Ale, the Gang’s All Here’: Smithwick's Ale has been around since the 14th century, so they’ve been riding the ups and downs of the Irish with the best (and worst of us). We can only conclude that they must be doing something right. Smithwick's is an Irish red ale and has a caramel, malty flavor with a slightly hoppy finish.

And finally, Murphy's Irish Red. It's fruity, hoppy and carbonated, and this Irish Red is not red from artificial coloring, but from the red barley that goes into it.

Hiccup … So whether you're a purist or a ‘New Wave’ sort, raise a pint on St. Patrick's Day, perhaps to The Wild Geese. Say Patrick (and Maryann) sent you! Heck, raise two!

So tell us, ‘What's your favorite kind of beer? stout, lager, ale, craft? What brand?

Maryann, I do prefer 'craft beer,' though I don't mind Padraig using it to clear out the snakes, as well. :-) I'd say beer that is reddish and full-bodied is among the most interesting beers for me. I'll have to give Murphy's Irish Red a try.