Turf cutters have unearthed more than home heating fuel from Ireland's bogs.  Bog bodies - naturally preserved human remains - are a fascinating study.  The chemical composition of the bog has antibiotic properties which kill the bacteria that would normally break down the flesh.  The bog also contains tannic acid, which is used to tan leather.  I was able to interview internationally renowned archaeologist, Dr. Eamonn (Ned) Kelly about his work with bog bodies.  Here are profiles of three of the most well known Irish bog bodies which Dr. Kelly studied. Each is named for the location where he was unearthed: Injuries:  Disemboweled, nipples cut, and struck three times across the head and once across the body with an axe.

Analysis:  This is thought to be a wealthy man.  His intricate hair style is held in place with a pine resin which would have been imported from France or Spain.  Only his head and torso remain, but he is thought to be quite short (5'2''.) 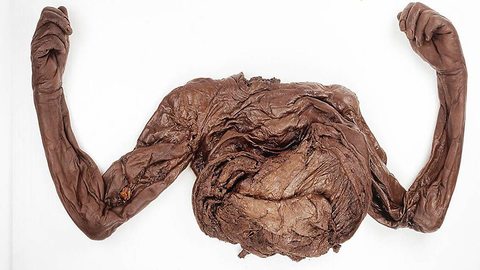 Injuries:  Stabbed repeatedly, nipples sliced, and cut in half.  Holes were cut in his upper arms through which a rope was pulled.  This could possibly have been used to restrain the man, similar to the use of a spancel for cattle.

Analysis:  This is thought to be a nobleman or a king because of his well-manicured, uncalloused hands, and a oppulent diet rich in meat. The only clothing remaining on the body is a arm band made of leather and bronze. Information about his diet was derived through hair analysis.  He is also believed to have been very tall (6'3''-6'6'') based on his arm span. Died:  around 2,000 BC.  This is the oldest fleshy body found in any European bog, and predates the Egyptian Tutankhamun mummy by hundreds of years.

Injuries:  The body was badly damaged upon discovery, so it is difficult to determine the cause of death, but he has wounds to the back and arms.

Analysis: Two hazel rods were found near the body.  These rods have been associated with ritual sacrifice.  This body is located on a boundary between territories and near a hill known to be used for inauguration of kings, so it fits with Dr. Kelly's theory that many of these bodies are kings who have been killed as a result of hard times in their kingdoms.  Ancient Irish Kings were held responsible for failures of crops, famines, plagues.  We can be pretty hard on our outgoing leaders, but I'm sure our politicians are happy that this tradition has been discontinued!

Fascinating stuff. I understand that, whilst the flesh of bodies that are buried in the earth will rot away, the bones remain preserved for millennia, but with the bog bodies, the acid which dissolves their bones preserves their flesh.

You've got it exactly, DJ!  Check out the video of my interview with Eamonn Kelly for more on the process.

I wonder if our grand leaders might work harder and behave themselves if the penalty was a one way ride to the bog side if they didn't. Interesting article with social and political points to ponder. Think I will have a pint to help the pondering,.... Slainte!