Our Wild Geese teammate Anna Porter took me to two 'famine' graveyards in the county of Leitrim.  At first sight there are just stone walls enclosing areas of beautiful Irish green grass, but once inside the intensity is immediately felt.

I entered through the old gate of the Drumshanbo Famine Graveyard and saw the uneven ground and the barely visible small stone enclosures from approximately 500 unmarked graves.  A rosary hung from a tree in the center,  and as I walked a wave of nausea and depression came over me as the reality of the events here suddenly took hold.

I did what I always do when visiting cemeteries I suggested that if anyone was still hanging around that they go swiftly and directly to the light, this experience was complete, and it was time to move on.

The ground under my feet puddled as I walked even though this was one of the sunniest summers on record in Ireland. The population in Leitrim was reduced by 40,000 during the famine and was one of the hardest-hit counties -- the saturated land contributed greatly to the failure of the crops. 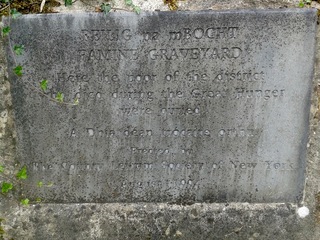 At the front gate is a plaque from the Leitrim Society of New York and there are five other famine graveyards in the area. Most, if not all, have dedication plaques sponsored by this group.

The second graveyard was in Carrick-On-Shannon "in the shadow of the old workhouse" for the proper internment of about 900 victims of the famine, mostly children, In 1998, the Carrick District Historical Society commemorated the 150th anniversary of the Famine by creating a memorial garden from the then-overgrown site. This time there was also a plaque from the people of Carrick acknowledging contributions of the Leitrim Society of New York.

Anna and I sat in front of the fountain for quite a while listening to the water and discussing the plight and current suicide rate in Ireland, due in large part to the mortgage crisis just hitting its peak there.  To me it felt lighter in this peaceful garden, as if the recognition of those long-forgotten within elevated the atmosphere.

The editor of the Leitrim Observer wanted to meet with me before I left as he had heard of my activities in the area and my involvement with The Wild Geese -- apparently they have a large New York subscriber base.  We couldn't make that meeting happen, but this was just the beginning of my observations of the love affair between the U.S. and Ireland in counties Leitrim and Wexford. Our next stop was this memorial garden of peace dedicated to Father Mychal Judge of the New York Fire Department, the first official casualty of 9/11 and son of Leitrim emigrants. AR

Part 2:  From Ireland to America - The Kennedy Homestead New Ross, ...

Leitrim is such a hidden gem.  I love it more every time we visit!

I have some stuff to post on it's magical side that blew me away...thanks for commenting Kelly!

Thanks Richard!  Just posted part 1 of my gathering series part 2 is on our johnson and scallion info i found in Carne!

Comment by James Richard Johnson on November 18, 2013 at 6:58pm
He said with bated breath!

My dance sessions all end Dec 5 then I will have lot's of time to get into it ...I can't wait myself...so much unearthed opening up so much more to do!