How Dad Won the War (Despite Almost Being Arrested for Sedition) 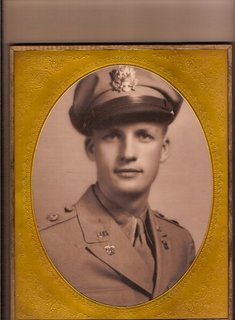 The 2012 Olympic Games in London reminded me of my Dad (photo left, during World War 2). He lived in the great battered city during World War II, part of a colorful U.S. Army career that included:

* Discovering that the cook at Gardner Field in Taft, just over the county line of my Central California home, was pocketing mess funds and serving condemned food to the Army airmen.  Dad—a natural-born accountant (he was Madonna Construction’s comptroller in the 1950s and 1960s)—turned the rascal in; the base commander promoted him to corporal. Then, the interview for Officers’ Candidate School went something like this:

Board:  What did you do before the War, Corporal?
Dad:  I was a bank manager, sir, for the Bank of America in Fellows, Calif.
Board:  Aren’t you a little young to be managing a bank?
Dad:  I was also the janitor, sir.

* Being issued a .45 pistol—rather than his standard issue typewriter and adding machine–-on the troopship bound for England. (Dad was raised in rural Missouri, however, and was a marvelous wing shot and so qualified as a marksman with both the 1903 Springfield and the M-1 Garand.)  It was his job to keep black enlisted men, in a racist army, below decks. These were the men who would drive the deuce-and-a-half trucks on the Red Ball Express, the supply line that kept the American infantry soldier alive. Seeing Ireland from that troopship's rail so moved him that he left in his children a homesickness for an unseen place.

* Being billeted in the movie actor Stewart Granger’s London flat—Granger did lots of swashbuckling stuff in Hollywood, but Dad neither swashed nor buckled for the duration.

* Almost getting arrested for exuberantly singing “Wearin’ of the Green,” an act of sedition, with the Irish elevator operator at a London hotel, who had become his new best friend after Dad shared a bottle of Johnnie Walker Scotch. Being a supply officer had its privileges.  The elevator operator was so good at his job that the Bobbies gave up after repeatedly racing up and down the hotel stairwell.

* Getting virtually adopted by an English family he’d grown fond of after presenting them with a bag of oranges.  Londoners hadn’t seen oranges for five years.

* Almost getting busted to private when an enraged corps commander tore into him, via cross-channel phone from the Normandy beachhead, about five gasoline supply companies that never showed up.  It turned out Patton’s Third Army had stolen them.

* Receiving a beautifully lettered certificate from the enlisted men in his office for Meritorious Drinking Under Fire.  Dad refused to seek shelter during a V-1 raid because he’d had a rough day at the office, and no buzz-bombs were going to interrupt his pint in his favorite pub.

* Almost becoming a casualty, but on a London bus. Two drunken GI’s where harassing a young British woman, who was visibly terrified. When Dad intervened, the two got out of their seats and got nose-to-nose with him. My father, who weighed maybe 140 lbs. after two Thanksgiving dinners, closed his eyes and prepared to die for his country. When a moment passed with no discernible personal destruction, he opened them again and the drunks were seated and staring intently out the window, as if bombed-out London was the most beautiful and arresting scene they’d ever encountered. Dad turned around, and there were four sunburned Aussie veterans standing behind him. “Should you need anything else, Leftenant,” their sergeant smiled, “we’ll be right here.”

Dad never lost his love for London, but not all of his war was lighthearted; he served in Graves Registration at the end, and his men reclaimed the battlefield remains of young lives cut short in fields and villages that led inexorably to the Rhine. Seventy years later, in a London reborn from the one my father knew, the world is celebrating life, the gift his generation willed to all of us. The fact that so many would not live to see the giving makes the gift more precious still.