The Breed Act forbade borrowing another California driver’s vehicle without permission, but neglected to assess a penalty for its violation. This old article points out the folly of such a law by spinning this story:

Now comes Ed Keefe of Taft into the story. Not so long ago Keefe. a young man, became intoxicated In Taft, borrowed a car without leave of the owner and in a wild-eyed attempt to emulate the harrowing speed of the wilder-eyed Darlo Resta, wrecked the machine, authorities allege. 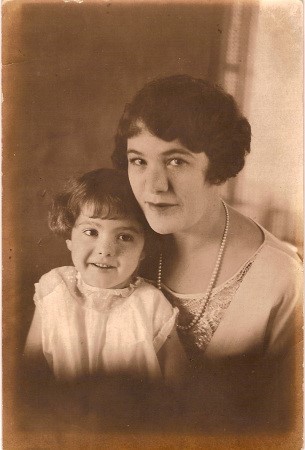 With dispatch, officers of the Taft constabulary incarcerated the young man and the new charge made one of its maiden appearances opposite the name of Keefe, who is no relation to the ball player. The charge was “driving an automobile without the owner’s consent.” Keefe pleaded guilty to the felony and asked for probation.

The court considered that it was his first offense; that he had a young wife and baby to support and granted the plea for leniency.  Shortly after probation was allowed Keefe was arrested again by the Taft police who accused him of doing everything except making an attempt to roll the streets of the oil town.

Again Ed Keefe appeared before Judge Mahon last week. Keefe denied before the court that he had attempted to apply the crimson brush to the portals of the West Side city, explaining that he had merely gone home to “sleep it off” in a genteel manner. After a severe reprimand and an order to behave, Keefe was given his freedom. He promised faithfully to accept the mandate of the court.

Today, Keefe appeared in court for the third time. Taft officers had pounced on the young hopeful again. They argued that he had attempted to mitigate the woes weighing upon his weary shoulders by a prolonged absorption of paint remover, often labelled synthetic gin or Scotch, according to the whims of the labeller.

The Taft officers informed the district attorney’s office that Keefe after “getting likkered up” had gone home where he endeavored to “beat up” his wife until the majesty of the law crimped his style. Judge Mahon made the young man the subject of a third excoriating reprimand, regretting that he was unable to imprison Keefe. The court reviewed his leniency granted in the hope that the defendant would “behave himself” and then predicted that Keefe would soon appear in court again with the label of some bona fide charge with a penalty attached.

To the neglect of the framers of the Breed Act, young Keefe owes his freedom. His wife wants to give him even more freedom for she has filed a complaint for divorce…

The writer is heavy-handed, too arch for his own ability, but young Keefe is too rich and too pathetic a target to pass up. He deserves every lash of this bush-league Mencken’s whip.

The problem is, Ed Keefe is my grandfather.

He was Irish–his father had been born in the Famine’s second year–and Ed would be the tenth of eleven children born on a Minnesota homestead, would become the love of my grandmother’s life, and, when he had disappeared by 1927, he would leave an emptiness in my mother’s heart that would never be filled.

She spent the rest of her life wondering about him.  She–and my Dad–even hired a detective to try to find him, and I’ve spent years searching for him on the internet–uncovering instead a cache of respectable, middle class, well-educated and pious Keefes, including an unexpected nun. I found their ancestral village, Coolboy, in Wicklow, then traced where nearly every one of them, in a trail that leads from Ontario to Minnesota to Kern County, was married and buried, and Edmund is not even a whisper.  Not even a footnote. Last night I accidentally Googled this story.

I reflexively wanted to punch out the man who would strike my grandmother–my Grandma Kelly, when she married another, more reliable, Irishman, a Taft police constable–and who would have so terrified my mother, four years old at the time of this news story, with all the violence it implies, buried or lost in her memory, a good thing. She never found him, which she thought a bad thing.

Ed Keefe didn’t to deserve to play the ghost that haunted my mother’s memories– he hadn’t enough character or weight or importance.  But he was her father. And he’s not important enough, either, for me to hate.  But he was my grandfather. Actions like these–impulsive, thoughtless, outrageous–suggest to me that he was already a lost cause at 28, and that his alcoholism almost certainly had deeper roots, possibly in bipolar disorder or in the depression that has stalked both lines of my family and has followed me in my own life from the day that it took my mother’s.

My step-grandfather, the police officer, George Kelly—my Gramps--was the grandfather any boy would want. Once, long before I was born, in a story that made me shiver when my Dad told it, three oilfield roughnecks jumped him in an alley while another officer, Pops Waggoner, was enjoying a Coke-and-something-else in the Prohibition-era Taft Elks Lodge.  Pops heard the scuffle and stumped, with his wooden leg, down the stairs to the alley and was too late. He found three unconscious men and one intact and upright Irish cop, in need of a new uniform.  That was the same Gramps who played catch with my two-year-old son two decades ago with a little rubber ball and played so gently and talked such soft and silly nonsense—the language of very small children-- that my son, John, fell a little in love with him.  As I had.

So I am no more comfortable about feeling sorry for myself over the accidents of biology and genetics that have flawed the lives of my mother and me than I am with punching a dead man. In fact, the story about Ed Keefe only made me love my mother more. She never had the inclination, or the self-regard, to understand that no victory she won in her life was too small. I am fascinated by this page from her senior yearbook, the 1939 Taft Union High School Derrick.

Her natural curls are shaped in a way that’s suggestive of Shirley Temple’s moppet locks or Gone with the Wind’s Butterfly McQueen–1939 was the year that film premiered–and in her pose, she’s looking slightly backward, over her shoulder. What’s pursuing her might have destroyed anyone else far earlier:  Her father was a drunk, a kind of charming and feckless village idiot, the butt of the Bakersfield Californian, with all the literary majesty 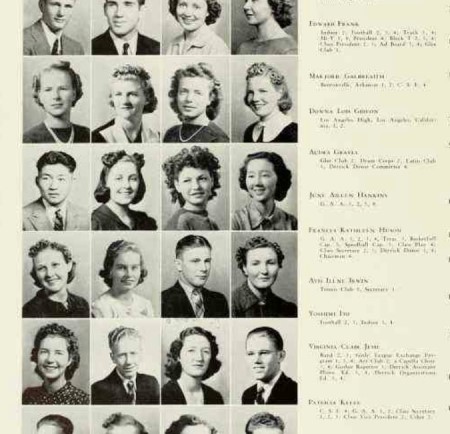 My mother is in the third row from the top, third from left, in the 1939 Derrick.

that this newspaper possesses, and so she would have grown up with that inheritance and with all the cruelties children can inflict on each other, in bloodless wounds that never heal.

She is in the honor society, CSF, the Girls’ Athletic Association, she is class secretary, class vice president, and there is nothing in that face that hints at defeat or humiliation or isolation. With a father as absurd as hers it is not absurd at all to draw an inference from a source as unreliable as a yearbook page with its little clutters of honoraria, a relic from such a distant time and place.

This is what I have learned about my mother in the last two days:

She would never stop glancing back over her shoulder. But, at 17, at Taft Union High School and Junior College, at the end of an era that had wounded and humiliated an entire nation and on the cusp of one that would make our power nearly unlimited, a lonely little girl had found her identity. She was a year away from marriage and four from motherhood, which would become her greatest and most enduring gift. She would strike sparks in my life: a love for learning, a fierce sense of social justice and a hunger for God’s presence–the last, a lifelong irritant that I cannot get rid of, no matter how hard I try.

I cannot tell you how much I admire her. 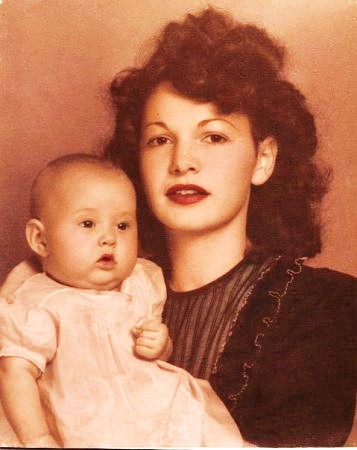