The story of my father’s emigration to America is one of legend.

Every New Year’s Eve he would tell us the story of his departure from Ireland on that day in 1959 and each year the story seemed to get bigger and bigger. If you sat down and made a list of people who were documented as making the trip down to Cobh, it would well exceed the maximum capacity of the Morris Minor that took them there. He was just 16 years old when he said goodbye to his family that night. He was a teenager on his way to a new life in a new land.

My dad spent 54 years in America. He built a home with my mother and watched his children have children. Although the majority of his life was here in New York, Ireland was never far from his mind. Once in America, he sent money home to his mother, kept a strong connection with his brothers and sisters and visited as often as possible. Always aware of the important role that both places played in his life, my father decided to be cremated and asked us to leave his ashes in those places that defined his time on Earth.

A few weeks back, my sisters and I brought our dad home.

We brought him to Clones, County Monaghan, Ireland.

We brought him to the house where he was born and spent the first 16 years of his life.

We brought him to the church where he was baptized and received his First Communion.

We buried him alongside his mother and father.

His brothers, sisters, cousins, nieces and nephews were all there to say goodbye.

After a beautiful mass and burial, we had a family lunch attended by more than 100 McCaughey and McElroy cousins. There were relations from all over the country, the large majority of whom I had never met before. They came out for my dad and many introduced themselves and shared wonderful memories of both my mother and father.

Later that day (and well into the night) over 20 of my first cousins gathered at the Cosy Bar (left) in Clones. It was a wonderful night of pints, stories, songs and chips. The only thing more satisfying than the Guinness was the thought of how happy my dad would have been to see me and my sisters with our Irish cousins.

On Sunday, a dozen of us drove up to land in County Tyrone that has been owned by McCaugheys for 270 years. (For my American friends: George Washington was a teenager back then.) It is the place where the history of the McCaugheys was written. It’s where my grandfather was born and my father and uncles spent the summers of their youth. It was a part of the official Frank McCaughey tour of Clones with each trip to Ireland leading to an inevitable visit.  We went and explored the house, said a prayer and shared stories. On the way out, my cousins and uncle climbed the hill overlooking the house and the loch and left some of dad behind. It makes me happy to think of him being back there. 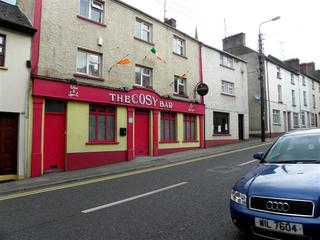 My sisters and I were in Ireland for just over 48 hours. Each minute was accounted for and each minute was wonderful.  Although we know that things won’t ever be as they once were, the trip and the task we completed provide a certain amount of closure. After all that our father gave to us, this weekend we were able to give a little back to him. I look forward to next New Year's Eve when we can not only tell the story of how dad came to America but also how we brought him home to Ireland.

(Originally published in the April-May 2013 issue of the Hedgemaster, newsletter of the Irish Cultural Society, irish-society.org.)

Thanks for sharing that John,

June of 2011, I helped my better half and his brother bring their father home to Doolin. We buried some of the ashes in the Family holdings of the Cemetery at St Brigid's well, just up from Liscannor. The rest we scattered to the wind just as the sun sank into the water and the sky turned to liquid gold and fire. June of 2014, We will once again stand on the edge of Doolin. This time, we will bring his brother home for the last time.

Bit, your experience recalls for me the trip Joe Gannon, i and 38 others took to Ireland in 1992, to commemorate the Irish who fought and died in America's Civil War. We stopped at the Cliffs of Moher, and, to recall the hundreds of thousands of those who left Ireland's shores forever, aimed to hurl a wreath into the churning waters far below. We five or so hardiest souls moved to the cliff's edge, and, when we tried to toss the wreath, the winds pushed it back. Finally, we experienced a break, and were able to drop the wreath, whose ribbon read "Off to Amerikay."