Hennigan’s Heritage Centre: A Link to a Vanishing Past On our recent trip to Ireland my wife and I visited a small museum in Killasser, Swinford, County Mayo, which should be on the itinerary of anyone who is ever in the area and is interested in Irish history and culture. The greatest treasure at Hennigan's Heritage Centre is not any of the artifacts you’ll see, though there are certainly hundreds of very interesting ones. The real treasure is the proprietor of this museum: Tom Hennigan. Some of us occasionally present different forms of living history to the public, Tom IS living history.

Sitting by the hearth of this thatched roof cottage, Tom doesn’t tell you  a story of how some anonymous group of people lived in these rural cottages, he describes how he and his five siblings grew up and lived in this same cottage. Tom is the sixth generation of his family to live on this small (10 acre) farm. Back in the early 1990s Tom, who had seven children with his wife, Katherine, wasn’t sure if he would also be the man who sold the family farm. Making a living off his small holding was becoming more and more difficult. and archaeology of the local area to convert his farm into a heritage centre. Certainly the location of Tom’s farm is not an ideal one for such an undertaking. It’s far off the beaten track, miles north of the main N-26 road from Swinford to Foxford, down the sort of narrow country roads that most tourists tend to avoid. That said, once you get there the location is a scenic one, with a lovely little lake at the bottom of the deep green fields that flow downhill in front of the cottage. When he was looking for funding for the project a banker from Swinford actually told him, “Sure the only tourist round here is a lost one.” Tom, however, was encouraged by the fact that nearby Foxford Woolen Mills and Knock Shrine attracted 60,000 and 1.5 million visitors every year, respectively.

So Tom pressed on, sometimes getting credit from local suppliers and doing much of the work himself. Eventually he had the old family cottage restored to what it had once been (the family now lives in a larger home built next to it years ago), even laying the original flagstones in front of the hearth. Tom had also collected hundreds of artifacts from the local area for his museum. In May of 1998 he was ready to open.

Since then he’s averaged over five thousand visits per year including such notables as the Lord Mayor of Belfast, former president of Poland, Lech Walesa, the German and Austrian Ministers for Agriculture Food and Forestry, U.S. Ambassador to Ireland, Michael Sullivan, and Taoiseach, Enda Kenny. The three room thatched roofed cottage that is the centerpiece of the tour has a lively, aromatic turf fire burning as you enter into the main room in the center of the building. Tom settles in on a stool right next to the hearth (left), a place you realize he first occupied over five decades ago as a small boy, to tell you the story of his family and their home. He tells it with a passion that no mere tour guide could ever replicate. If you are Irish, or have Irish ancestry, you almost certainly had some ancestors who lived in one of these small stone cottages that dot the Irish countryside, especially in the west. They are usually in some stage of the process of becoming nothing but a pile of stones. Those ancestors would have lived close to the way Tom and his family were living in the 1950s and 60s, because it had not changed very much for several centuries. He can tell you a story about just about any object in the house. My favorite was what he called, “the original George Foreman grill,” (below right) a handheld grill used for cooking fish that had a reservoir to collect the fat that was draining off it. The father would get the fish, because his good health was so vital to the survival of the family, while the rest of the family would get bread and enjoy “dipping the dip” in the cup.

Another interesting anecdote involved the superstitions that revolved around the fireside tongs. They would sometimes be placed over the cradle to protect the baby from harm. The mother of the house would also sometimes toss the tongs behind one of her children who was leaving to bring them luck.

After regaling you with his tales of what life was like in their three-room thatched cottage, Tom will bring you over to tour his museum. Its displays include objects that cover just about every aspect of country life in Ireland in the last few hundred years. There are dioramas illustrating how people lived in the area back to the stone age. Pick up just about any object in the museum and Tom will likely have a story go along with it, often about the person who made it. You’ll see all the equipment from the shoemaker's shop that belonged to Jimmy Higgins in Swinford, a man Tom knew, and where he used to sometimes work as a boy. There is also a locally acquired poitìn still. (If Tom ever worked on that one, he’s not saying.) 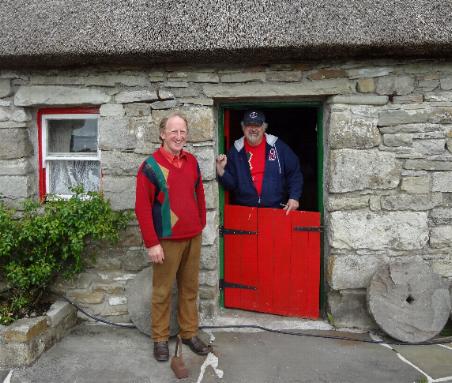 When the tour is over, Tom’s lovely wife Katherine will serve you tea with scones and jam in their tea room. We sat together with two Irish couples who had taken the tour with us and had a wonderfully relaxed conversation about Ireland and the United States. The whole experience had more the feeling of having a visit with some friends than it did a tourist attraction.

It takes some effort to get down the small roads to Hennigan’s, but it’s well worth it. Tom looks to be in great health and will hopefully be doing this for many years to come, but he and others who lived this life won’t be here forever. If you are going to be in their area, get over to see Hennigan’s Heritage Centre.  You won’t regret the trip.

Thanks for an addition to my own wish list of places to see!

Wonderful article Joe what an amazing place with so many layers thank you!

Great find! As much time as I have spent up that way, I've never been..I will have to pay a visit next summe whilst there