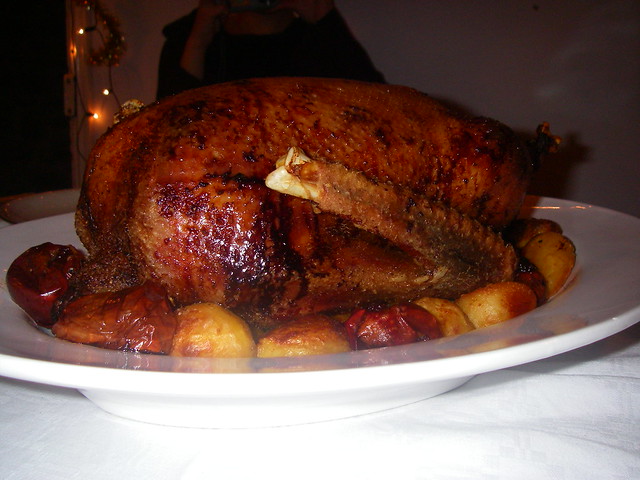 First you need to pluck it, singe it, cut off the…well, we won’t go that traditional. You would probably purchase your goose ready to roast. Roasting it would not be different from duck or chicken, so I’ve been told. I haven’t done it so feel free to correct me. If you want to stuff your goose the way the Irish traditionally do, you would use mashed potatoes, onions, fresh herbs, butter, salt, and pepper. I must admit, being an American, it never occurred to me to make stuffing without bread of some kind, but I’m not an expert cook so keep that in mind.

If you’d like some goose gravy, you can find directions on this blog: The Evening Hérault

A more complete recipe for stuffing the goose can be found on Missouri Life online.

If you’d rather have turkey, I’m guessing you probably already have a recipe, but here’s one from the Irish Independent just in case.

Next, the all-important potatoes. (No matter if the stuffing is potatoes or not, you still need potatoes.)

I loved the roasted potatoes I had in Ireland. The Irish American Mom shares a recipe here that I plan to try soon. Maybe I’ll get my family to give up mashed potatoes for Christmas with these!

While you’re on the Irish American Mom’s website, check out her other recipes, like the one for boiled cabbage. Plum Pudding is no quick dish to make. Perhaps that’s why there are traditions about the family helping.

I’ve never made this myself. I’ll stick to cookies. But if you’re adventurous, go for it. I’d love to hear how yours came out.

When Christmas Day has come and gone, you’re not finished! On St. Stephen’s Day you’ll need some spiced beef. It’s also Boxing Day, a day for giving to the needy. These traditions have been observed in Ireland and England for centuries. A writer in 1731, describing Boxing Day, said,

“In the evening, away we went to a neighbouring alehouse, where abundance of these gentry [the ones who gave to the poor] were assembled round a stately piece of roast beef, and as large a plum-pudding.”

That’s right. You should make sure some of the plum pudding stays around for a while. I hear it’s even better leftover. If it’s anything like my grandma’s apple stack cake, that’s true.

But the burning question about plum pudding, at least for me, is where are the plums?

As for the spiced beef, you might ask what it’s spiced with. The answer, at least in the recipe I’m sharing here, is cinnamon, nutmeg, and allspice. How’s that for Christmas flavor?

Whatever you’re having for Christmas dinner, as long as it’s prepared with love, you’re sure to enjoy it. What’s on your menu?

Lovely article, Cindy!  You are so right about the multiple types of potato on one plate.  I think the spice beef sounds amazing!

Thanks, Kelly. If you can discern your heritage by what you like to have on your table, I must be Irish. Two of my favorite things are potatoes and tea. :)

Spice beef does sound good. And kind of Caribbean. Maybe why my Irish grandfather loved Jamaican meat pies. (It really was his favorite takeout...)