Editorial Coordinator for The Wild Geese, Ryan O'Rourke, recently had the opportunity to chat with Irish-American author James Francis Smith.  Now living in the Pacific Northwest region of the United States, James is a native of Philadelphia, Pennsylvania (U.S.A.).  After a successful career in industry and finance, he returned to his first love -- historical novels. In documenting the series he titled "The Irish-American Story," Jim created a resource for preserving the history of Irish accomplishments and contributions to American Society.  Smith’s novels chronicle the lives, loves, and wars of people and events that have often been overlooked by history.  Among his books are the following:

James' newest book, "Irish in the American Revolution," is a historic fiction that follows the experience of the Irish on both sides of the struggle -- both Colonial and British.  Visit Jim's blog at www.TheIrish-AmericanStory.com.

The Wild Geese:  Jim, let's start by having you tell us about your series of books called, "The Irish-American Story."

James Francis Smith:  I started out by writing a tale about the ancient Druids & Celts. The books then took on a life of their own. That's when I decided to make it a series. 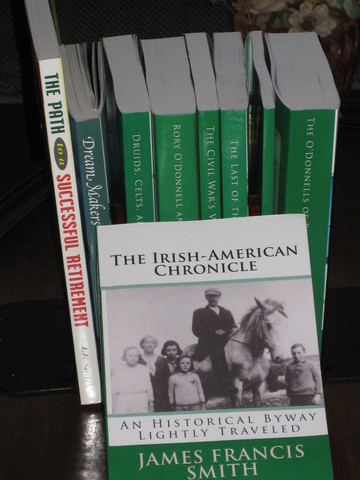 The Wild Geese:  And these are historical novels, yes?

The Wild Geese:  Your latest book is entitled "Irish in the American Revolution."  Explain how you worked this into the historic fiction genre.

James Francis Smith:  The history is accurate.  I added fictional characters to tie the story together. For example, I invented Mary Carr to be a sister to Patrick Carr who died in the Boston Massacre. That enabled me to add Paul Revere and Ben Franklin.

The Wild Geese:  So these are books that will appeal to both history buffs and readers who are just looking for a good story.

James Francis Smith:  The Revolutionary War book is most likely to be the most complete book on that war because I included both the Colonial side as well as the British side.  My sources include Benjamin Franklin's autobiography and a book by Roger Lamb published in 1809.

The Wild Geese:  Yes, this is the part that intrigues me most Jim ... the fact that you've told the stories from Irishmen on both sides of the war.

James Francis Smith:  Just as in my Civil War book, I focused on the fact that Irish fought on both sides.

The Wild Geese:  Yes indeed, Jim.  Speaking personally, this story you tell has a great deal of appeal to me.  My last Irish-born ancestor immigrated to the Colonies in the 1730s.  His sons fought in the Revolutionary war against the empire that had oppressed their own father and forced him to leave Ireland.They were among the old stock Gaelic Irish that emigrated in the 18th century.  It was mostly Scots-Irish at that time, but my folks were likely driven out by the Penal Laws which were at their height at that time.

James Francis Smith:  Maybe you are the one who should have written the book.  Mine came over in the 1890s and early 1900s.  Few realize that Irish & Scot-Irish made up most of Washington's army and almost all of the Colonial Navy

The Wild GeeseL  Yes! By most accounts, the Irish / Scots-Irish made the best soldiers. I seem to remember Washington saying something to that effect himself.

James Francis Smith:  The Pennsylvania Line was composed of most Scots-Irish.  With their long rifles, they made life hell for the Brits.

The Wild Geese:  That's where my folks were from at the time ... Pennsylvania.

James Francis Smith:  Barry, Moylan are a big part of why we succeeded.  I'm going to send a copy of the latest book to evedryone on line today.

The Wild Geese:  That's very generous of you, Jim.

James Francis Smith:  I desire to spread the story of Irish contributions as far as possible.  I'll also include "The Irish-American Chronicle" a 120-page book which introduces the others.

The Wild Geese:  Well, this has been a great introduction to your work, Jim.

The Wild Geese:  Thanks so much for your time today.  We'll look forward to hearing more about your unique historical novels.

James Francis Smith:  You are more than welcome.