On a July day nearly 130 years ago, an unknown and homesick young Irish writer trudged along a busy London street. He stopped suddenly and stood still, for he thought he could hear the tinkling of water in the midst of the bustling thoroughfare. He followed the sound and found he was looking in a shop window. There inside was a little fountain with a brightly coloured ball bobbing on its jet. The young man was suddenly transported back to the small uninhabited island of Innisfree that sits within Lough Gill in County Sligo, Ireland, where he had spent many of his younger days. As he gazed and listened, words began to tumble in his mind. He hurried back to his small bedsit and put the first draft of a poem on paper.

The young man was William Butler Yeats, and the finely wrought poem he produced was The Lake Isle of Innisfree. It began:

I will arise and go now, and go to Innisfree,
And a small cabin build there of clay and wattles made;
Nine bean rows will I have there, a hive for the honey-bee,
And live alone in the bee-loud glade.

Every writer thrives and survives on memories. Mine are sometimes about a place called Hillside in north Donegal. It was where my mother was from, and I spent many of my early teenage summers there. The sound of my big cousin Jimmy’s horse and cart jolting in and out of hard ruts on the road pulls at the heart even now as I think of the times we made our way to the turf bank next to the Gap of Mamore. Or his young sister Nuala standing against the lime-washed wall of the house in her Sunday-white blouse and tartan skirt, impatient for me to walk to Dunree beach with her to pick barnacles and winkles for boiling.

This short stream of consciousness is from one of my novels in which I, as a 13-year-old, remember a summer in the Hillside: 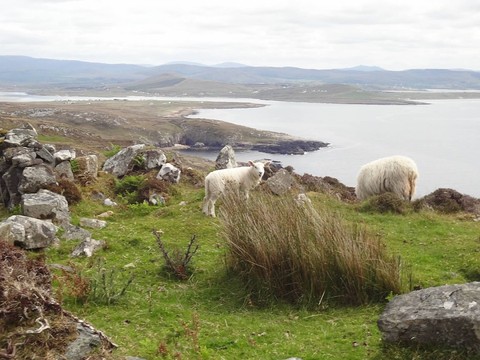 Nuala told me there were kittens born and the two of us went into the barn to see them. Mixed in with our sweat was some other kind of a smell that made me go all quivery just below my heart. And when we were kneeling down my shoulder went against hers. I thought about that a good lot. I never said to her of course. I couldn’t have said a thing like that to her. Often at night in our attic after I got back to Derry I’d be lying nearly ready to go to sleep and thinking back on the weeks down there and I’d get a good feeling inside of me, a really good feeling, but sad at the same time. Nuala’s face would be in my head sometimes but as well as that it was the smell of the cow clap and turf smoke all in together. And Auntie Madge after the breakfast going Chooka chooka chooka chooka to the hens out the front and her with the bottom half of her apron held away in front of her like a tablecloth before she emptied the crumbs and scraps out for the hens to eat and them running towards her all lopsided as if they were going to topple over any minute. And wait till you hear this for a laugh. I used to always think the red combs on their foreheads and their ears were the best bits of the bacon. I really did. The ducks were a scream. They’d get all excited if you went anywhere near them and start that stupid laugh as if they were taunting you. Me and Nuala used to laugh back at them and then they’d come paddling over to us honking away, the same every time, and never once did we give them a thing to eat. And I used to wonder if she ever did any of those things when I wasn’t there but I’d say she didn’t. Up here in the attic when I got back to Derry I thought about the nights in the Hillside bed and wee bits of the straw mattress sticking into me. And the rain slapping away sometimes at the water in the water barrel right below my window and bouncing like mad on the roof of the shed. And it’s funny, every time I come back home it’s the same. For two or three days or more every smell off me is the Hillside.

If this strikes a chord, my novel The Wake: And What Jeremiah Did Next
will be free, August 26th and 27th.
Pick up your copy here.
I'd be honored if you did.

Your memories are wonderful - thanks for the intriguing tidbits!

Great timing on your lovely post and the giveaway of your novel. Nice to see you here, Colm.

Thanks Claire. I'm glad I came.

thank you so much, Colm. Sorry I missed the freebie to read more.

Thank you Beth. If you like I could send you a PDF of the book. I'd be glad to. The only way I know of doing this is to send it to your email address. Please let me know what you think. My email address is colmherron@hotmail.com

Thank you so much, Colm! I will email you right now

Sorry I missed the Freebe as well ... You are now a part of the Wild Geese ..lovely article.... I did not know that WB Yates wrote the poem while living in London ... long may your work  continue  .

That's Just How It Was,

You would also be welcome to a complimentary PDF. My email address is colmherron@hotmail.com

I would be delighted to send you one if you want to email me.

Got the PDF thank you Colm