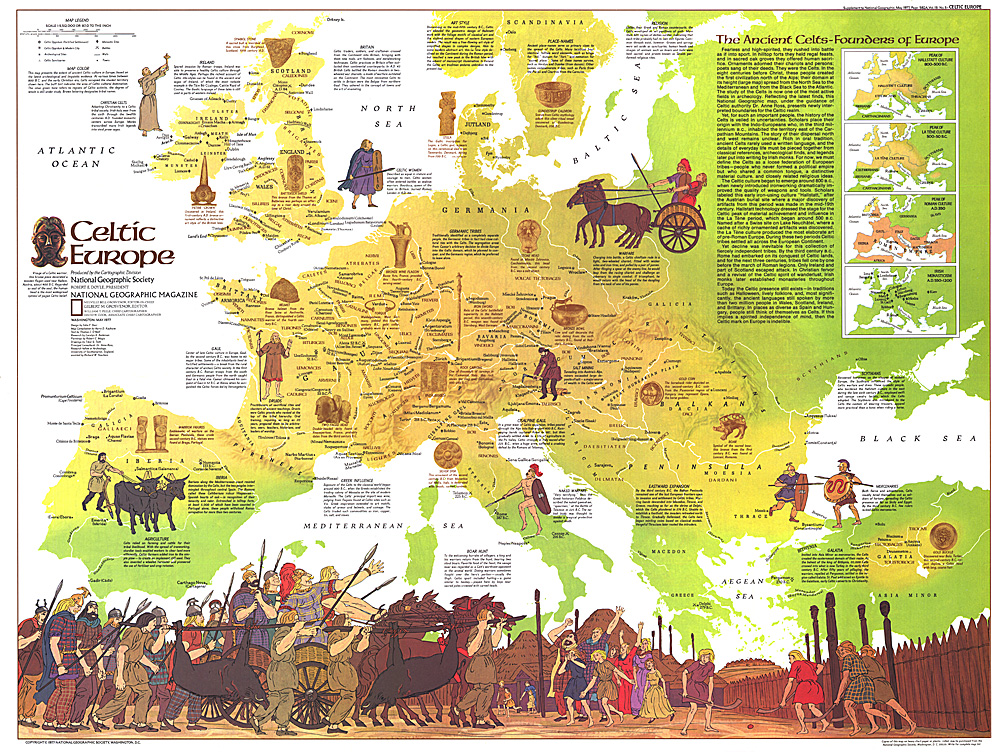 Displayed predominately in Smith's office is the map of 'Celtic Europe' published in May 1977 by National Geographic Magazine.

Subtitled, 'The Ancient Celts-Founders of Europe,' the map and its accompanying article became the inspiration for Smith's 350-page historical novel, Druids, Celts, and Romans. Before the dawn of written history, the Celts ruled a swath of Europe, from the Hallstatt Culture (800 to 500 BCE) through the La Térne Culture (500 to 50 BCE) ending with the Roman invasion.

The novel's cover and 8-illustrations are the creative work of the talented Sean Judy.

Druids, Celts, and Romans, begins in Switzerland, the land of the Helvetii Tribe, with a dispute between two rival Druids. Master Druid Munli recruits Ragenos, the champion of the Mayri Tribe, to kill the evil Druid Evos, should he attempt to harm Munli.

Following this deed, Ragenos leads the life of a traveling mercenary, when he makes the acquaintance of Danous, bard of the Parisii Tribe, the founders of Paris.

Meanwhile, Conel, and Meva his wife, raised and educated a rarity… triplets.

The numeral 3 was magic to the Celts. The female Una along with Mick were bred to be warriors, Hugh a Druid.

Munli predicted the Romans would destroy the Celts. To prevent this from occurring, Conel purchased Julia, the

captive granddaughter of the Roman Senator Lucius. Conel promised to return her safely to Rome, if she taught him

about the Roman military, their family life, religion, and language. The triplets compared these to their Celtic beliefs.

After successfully repulsing the Germans, Mick remained with the army, Hugh studied for the Druid priesthood, and Una trained to replace her father as the leader of the Mayri clan.

After Conel and Una crossed the treacherous Alps to return Julia, Una became separated, was captured, and sold to Etruscans. Unaware of his daughter's fate, Conel continued on to Rome. Upon arriving, the Romans enslaved him.

Una's brothers sensed her danger, and along with the Bard Danous crossed the Alps in pursuit. Ragenos returned and aided Meva in recruiting an army to rescue Conel. Una escaped, and along with her brothers joined the Celtic army under Ragenos.

Written history recorded the following on the Celtic Invasion of Rome

A decendant of the McGabhanns from Co. Cavan, Ireland.

Who angilcized his family's surname.

thanks! this is most interesting!

I will definitely have to get this book. I love to read about the history of Ireland, especially if it is in a novel form. I look forward to reading it.