It is well known that Douglas Hyde (January 17, 1860-July 12, 1949) was the first president of the Irish Republic. What may not be as well known is that he was a fluent speaker of the Irish language, a wonderful poet and an avid collector of Irish folklore. He fiercely objected to the ongoing "Anglicising" of Ireland ("The Necessity for De-Anglicising Ireland" by Douglas Hyde). By this he meant that though the majority of Irish people objected to the presence of English soldiers and administrators occupying their country, "we were [hypocritically] following them in our dress, literature, music, games and ideas. We will become a nation of imitators."

Hyde’s goals were to counteract these developments. In many ways, he became the conscience of the Irish people, encouraging them to take pride in their own nationhood, speak and write in their own language and cherish their own stories and folklore.

Known as "An Craoibhin Aoibhinn" ("The Pleasant Little Branch"), Douglas Hyde was born in Castlerea, County Roscommon. His father was a Church of Ireland rector who chose to home school his children. In his youth, Douglas became fascinated hearing the old people speaking the Irish language. Eventually, he visited Dublin and discovered there were groups of people like himself who had a great interest in learning Irish, a language at the time that was seen by many as "backward" and "old fashioned." (Wikipedia)

Eventually, Hyde entered Trinity College and became fluent in Irish, French, Latin, German, Greek and Hebrew. ("Douglas Hyde: A Maker of Modern Ireland" by Janet Egleson and Gareth Dunleavy) His passion for the Irish language and its preservation led him to found Conradh na Gaedhilge (The Gaelic League) in 1893, whose goals were to encourage the preservation of Irish culture, its music, dances and language.

In time, Douglas began to write his own poetry and to collect Irish folklore. Especially, he was determined to rescue the oral tradition that had been lost during the Famine. "Lost forever with corpses in the grave-pits of the famine years ... were the poems, tales, proverbs, prayers and songs of the oral tradition." ("Douglas Hyde" by Gareth Dunleavy) Dunleavy goes on to say that it is not as astonishing that Hyde was able to recover so much of the oral tradition, but rather that he was able find any remnant of it by 1880. He made it a personal crusade to find people who knew the stories, listened to them and wrote them down.

In 1889, Douglas published his first book of folktales, titled Leabhar Sgealaigheachta (Book of Stories). It contained 20 stories "collected from countrymen and women in their 60s and 70s, who had miraculously lived through 1846-47." 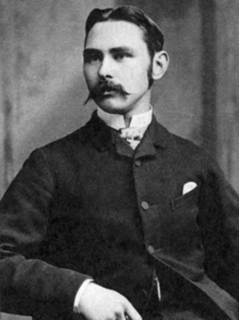 No one can tell us the genesis of it, (folklore telling tradition) no one can consciously present its inception. It is in many ways a mystery, part of the flotsam and jetsam of the ages still beating feebly against the shores of the 19th century ... still surviving on the Western coasts of Ireland where I gathered some of the bundles of it. ... (Hyde quoted in Dunleavy’s book)

In six "Notes" appended to the Gaelic text of these stories, Hyde rebutted those who dismissively asked, "Why keep Irish alive?" His answer was that if the Irish language died, its literature would go into oblivion and that it deserved better. English is the language of "strangers" but Irish spawned a literature rich in legends, poems and proverbs.

Hyde also explained that rather than give a "pure" (corrected) text or transcription, he wrote down the stories as told to him with spelling unchanged and correcting only errors in grammar and inflection, occasionally substituting a word when necessary.

Hyde’s next collection, Beside the Fire (1890), presented 15 folktales in the Irish language. This time, he provided "facing pages" of Irish and his own English translations, thinking that if the stories were to be translated (which they would be), this should be done accurately. He dedicated it to "those truly cultured and unselfish men, the poet-scribes and hedgemasters of the last century and the beginning of this ... men who may well be called the last of the Milesians. ..." (Egleson and Dunleavy) 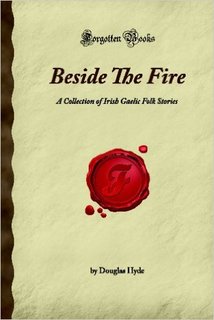 In his translation for these tales, Hyde observed how English and Irish are opposed to one another in "spirit and idiom ... and how consequently he found translation to be hard." He points out that the English spoken by three-quarters of the Irish people was influenced heavily by the Irish idiom that was the language of the speaker’s father, grandfather, or great grandfather. He also explains that he did not always translate the Irish idioms literally. He did not translate, for example, the Irish for "he died" as "he got death," since this literal translation was not adopted into Anglo-Irish. He did, however, translate the Irish "ghnidheadh se sin" as "he used to do that," which is an Anglo-Irish effort to construct a consuetudinal (established custom or usage) tense missing in English. Hyde avoided the pluperfect tense since it did not exist in the Irish language. (The Young Douglas Hyde by Dominic Daly)

Many of these tales take place in a magical or fairy world. In the story, "The Tailor and the Three Beasts," Hyde found episodes that reminded him of the tales of Jack the Giant Killer, possibly from an English source. He took note of the tale’s nonsense ending: "The tailor and his wife came home to Galway. They gave me paper stockings and shoes of thick milk. I lost them since." (Dunleavy) Such an ending is prevalent in other cultural traditions, especially the Slavic stories.

Another example is "Paddyeen O’Kelly and the Weasel." His teller was John Cunningham from Roscommon, a man with 70 and 80 years, who was illiterate. The story is set in the fairy world of the king and queen of Connacht. The fairy hurling team wins a big match played on Moytura (site of first recorded battle in the ancient Celtic world) and Paddyeen is given a purse of gold by the fairy king. (The Encylopedia of Celtic Myth and Legend by John and Caitlin Matthews)

In "Trunk Without Head," Hyde picked out an utterance by one of the characters: "You are a valiant man and it stood you upon to be so or you would be dead." In translation: "It was well for yourself it was so." Hyde adds that this Elizabethan idiom was a frequent occurrence in Connacht "either filtering its way across the island from the Pale or else being picked up by the people from the English peasantry with whom they have to associate when they go over to England to reap the harvest." (Matthews)

Hyde concluded Beside the Fire with extensive notes on the Irish text, giving "variant spellings and pronunciations for the same words in Connacht and other provinces." (Dunleavy)

In Love Songs of Connacht (1893), Hyde tested his skills as a poet and translator of Irish verse. He offered these poems from one province thinking they might be useful "to foreign philologists ignorant of the Irish idiom and to his contemporaries in Ireland who may have wished to learn the native language." He mentions that in some of the verses he tried to reproduce the vowel rhythms and the exact meters of the originals. Many of the "Love Songs" are by Irish country women "whose directness of expression reveals their capacity for love and simultaneously their frustration with custom, tradition, poverty and the matchmaking game that often defeated them." (Dunleavy)

Right, "A Connemara Girl," by Augustus Burke, The National Gallery of Ireland, Dublin, 1865

I denounce love; woe is she who gave it
To the son of yon woman who never understood it
My heart is in my middle, sure he has left it black
And I do not see him on the street or in any place
("If I were to go West")

From Biddy Crimmy, who lived in a log cabin near Frenchpark,  County Roscommon. Hyde recorded the following verse in 1877, titled "Mo Bhron ar an Bhfairrge" ("My Grief on the Sea"):

In 1901, Hyde published a collection of 33 of his own poems that had appeared in weekly newspapers in Ubhla De’n Craoibh (Apples of the Branch). In the preface, he wrote, "I would like to make even one good verse in the language in which I am now writing than to make a whole verse in English." Several of the poems in this collection were odes written for the Gaelic League and others were ballads dealing with "emigration, exile and death." Lady Gregory, with whom Hyde worked very closely, was "deeply impressed with these poems." (Yeats and Lady Gregory, Trina's Place) There are three fine devils eating my heart
They left me my grief! without a thing...
Poverty left me without a shirt
Sickness left me with my head weak
And my body miserable, an ugly thing
Love left me like a coal upon the floor
Like a half burned sod that is never put out
("Three Fine Devils")

In his Religious Songs of Connacht (1906), Hyde printed close to 250 poems, stories, prayers, charms, blessings and curses that he had begun collecting 20 years earlier. He assured his readers that a majority of these had been taken down as they came from the mouths of the people:

Hyde collected, translated and published other volumes of Irish folklore and history. Among these are Three Sorrows of Storytelling, A Literary History of Ireland, Medieval Tales from the Irish and a one-act play in Irish, Casadh and t-Sugain (The Twisting Rope). 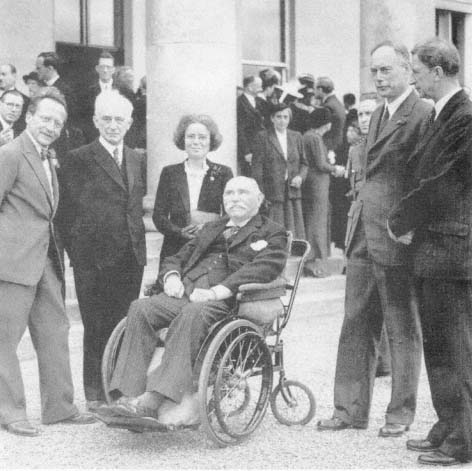 Pictured, Hyde in 1943, with Eamon de Valera to the right. Hyde was confined to a wheelchair following a stroke in 1940.

Douglas Hyde’s achievements can, according to Gareth Dunleavy, be exemplified in his poem "Raftery":

I am Raftery the Poet
Full of Hope and Love
With eyes that have no light
With gentleness that has no misery.

Going west upon my pilgrimage
By the light of my heart
Feeble and tired
To the end of my road.

Behold me now
And my face to a wall
And playing music
Unto empty pockets.

Dunleavy emphasized that this poem is a "triumph so complete that no one today knows with certainty whether it is the work of a blind Galway poet or a Protestant rector’s son from County Roscommon."

Hyde left the office of president on June 25, 1945, opting not to nominate himself for a second term. He did not return to his home in Roscommon but moved into a residence on the grounds of Aras an Uachtarian in Dublin. Here he lived out the remaining four years of his life and died quietly on July 12, 1949. He was 89 years of age.

As we saw in the beginning of this article, Douglas Hyde had strong objections to the "Anglicising" of Ireland." At the conclusion of his talk, "The Necessity for De-Anglicising Ireland" to the Irish Literary Society in 1892, he calls upon every Irish person, whether Unionist or Nationalist "who wishes to see the Irish nation produce its best ... to set his face against this constant running to England for our books, literature, music, games, fashions and ideas ... and to become one of the most original, artistic, literary and charming peoples of Europe."

This call seems to beg the question: What would have happened had the Irish people, in defiance, held on to their native language, refusing to use any English idiom at all. An interesting "what if" for a future essay!!

[This article was first published in The Hedgemaster, newsletter of the Irish Cultural Society of Garden City.]

Me too, have enjoyed reading it