In a sense (of history), I have a personal recollection of General Phil Sheridan and his arrival at the battlefield at Cedar Creek  on October 19, 1864 when he rallied a beaten Union Army and launched the counter attack that virtually destroyed Confederate military forces in the Shenandoah Valley.  The Cedar Creek Battle Animated Map on the Civil War Trust website will allow you to follow the battle as it developed.

The 2001 reenactment of the battle was my first reenacting event portraying a Civil War Union soldier.  A ‘fresh fish’ recruit, uniformed and equipped by friends in Company B, 28th Massachusetts Volunteers, I was hooked by the experience.  After spending the first day and the first half of the second day of the reenactment as we were repeatedly beaten by hollering hordes clad in gray, butternut, and what-have-you, I hooped and hollered just like the rest of the army as our “Little Phil” galloped along our line, guidon raised in his fist – and then we turned and crushed the rebels in our counterattack and Jubal Early was paid for his visit to Washington D.C. in July, 1864.

Shoe the steed with silver
That bore him to the fray,
When he heard the guns at dawning --
Miles away;
When he heard them calling, calling --
Mount! nor stay:
Quick, or all is lost;
They’ve surprised and stormed the post,
They push your routed host --
Gallop! Retrieve the day.

House the horse in ermine --
For the foam-flake blew
White through the red October;
He thundered into view;
They cheered him in the looming,
Horseman and horse they knew.
The turn of the tide began,
The rally of bugles ran,
He swung his hat in the van;
The electric hoof-spark flew.

Wreathe the steed and lead him --
For the charge he led
Touched and turned the cypress
Into amaranths for the head
Of Philip, king of riders,
Who raised them from the dead.
The camp (at dawning lost),
By eve, recovered---forced,
Rang with laughter of the host
At belated Early fled.

Shroud the horse in sable --
For the mounds they heap!
There is firing in the Valley,
And yet no strife they keep;
It is the parting volley,
It is the pathos deep.
There is glory for the brave
Who lead, and noble save,
But no knowledge in the grave
Where the nameless followers sleep.

The little bantam rooster of an Irishman, Phil Sheridan, has passed into history, legend, and popular culture. Among the many monuments he has left us across the country, the one found in Sheridan Circle, Washington DC, is one of my favorites.  The General is portrayed atop Rienzi (later renamed Winchester), the horse that carried him the some 20 miles of his ride from Winchester, Virginia to the battlefield.   (You can actually visit Winchester today at the Smithsonians’s Museum of American History in Washington D.C.) 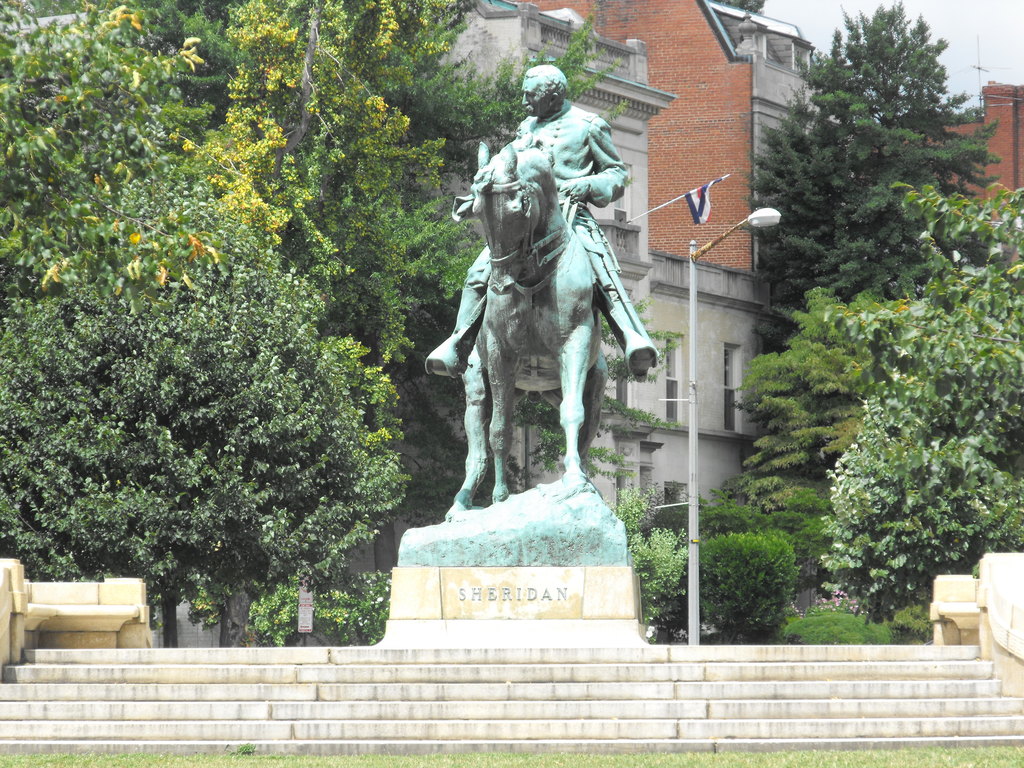 The statue is the work of Gutzon Borglum and was erected on this site along Washington DC’s Embassy Row in 1908.  You can see more images and information about this and other Washington monuments at dcMemorials.com.

It turns out that Borglum did a second somewhat different statue on this theme, installed in 1923, in Chicago north of W. Belmont Avenue and west of N. Lake Shore Drive. It turns out that in addition to being a successful commander of cavalry during and after the American Civil War, Sheridan was also instrumental in fighting the great Chicago Fire of 1871 from his Army Headquarters then located in Chicago.  He gave the orders for the demolition of buildings in the path of the fire using explosives to create a firebreak that would halt the fire’s spread.

Sheridan and his famous ride were an early inspiration to filmmakers, the first film apparently being “Sheridan’s Ride” released in 1913.  This prompted a satire released the following year called, “Sheridan’s Pride” in which the General’s automobile reportedly is rescued from a roadside ditch by an elephant!

Little Phil continues to appear in films about the Civil War and the Indian Wars, with the Internet Movie Data Base listing the following:

Son of the Morning Star (1991) (TV) Played by Dean Stockwell

Custer of the West (1967) Played by Lawrence Tierney

They Died with Their Boots On (1941) Played by John Litel (as Gen. Phil Sheridan)

My personal favorite from the list above  is from the John Ford-John Wayne film “Rio Grande” in which Wayne’s character (Colonel Yorke) served under Sheridan in the Shenandoah Valley and found himself destroying the home of his wife, played by Maureen O’Hara.  Sheridan issues Colonel Kirby Yorke a verbal order to cross the Rio Grande River and enter Mexico to hunt down and destroy a band of renegade Apache Indians who have used that border repeatedly to escape after raiding settlements on the US side of the river.  Rio Grande (1950)

Gen. Philip Sheridan: I'm going to issue you an order and give it to you personally. I want you to cross the Rio Grande, hit the Apache and burn him out. I'm tired of hit-and-run. I'm sick of diplomatic hide-and-seek.

Gen. Philip Sheridan: If there's any doubt about the policy of my command, I'll give it to you in one sentence: The only good Indian is a dead Indian. Clear enough?

A number of sources report that what he actually said was “The only good Indians I ever saw were dead.”  Sheridan reportedly met with Comanche Chief Toch-a-Way (Turtle Dove), at Fort Cobb in the  Indian Territory in January 1869.  The Chief had said, “Me Toch-a-Way, Me good Indian."  Sheridan would later deny it though many of those present would confirm that he did in fact say it.

I will confess to my own personal favorite.  General Sheridan took some 50,000 Union troops into Texas in 1865 to complete the Confederate surrender and restore federal control of the border with Mexco (where French forces were trying to sustain an Austrian Archduke as Emperor).  A year later, in 1866, as he left having completed is duties there, Sheridan reportedly said, 'If I owned Texas and all Hell, I would rent out Texas and live in Hell.'

The link for the film "Rio Grande" takes you to the Internet Movie Data Base entry where it explains that the film is set in 1875 when Sheridan is responsible for the western frontier and the Indian War, but Colonel Yorke's personal life is revealed to be troubled as a result of events in the Shenandoah Valley in 1864 - he and his wife have lived apart for years and he was not even aware that his son (now a recruit in his regiment facing the Apaches) has entered West Point, failed his classes at the academy, and then enlisted to serve in the ranks.

A great posting. Take a look at my historical novel "The Civil War's Valiant Irish', available at Amazon Book Store and on Kindle and Nook.  My family home was located in KIllenkere within 200 yards of where Sheridan was born.  our family believes Sheridan was related. Sheridan's exploits are well covered in my book. We enjoyed participating in the annual reenactment of the Battle of Cedar Creek from its inception in October 1989, when nine of us, most from Company M, 1st New Jersey, portrayed commander Phil Sheridan and his personal staff and color guard, and rode from Winchester to Cedar Creek retracing Sheridan's actual route. Here are some more pix related to that commemoration.

Great article. It's good to get a different perspective on the man. I've heard a-lot of anecdotal anti Sheridan comments from people on my travels. Sometimes figures are signalled out as unsavoury, or villainous, depending on what suits the times. "I'm putting together a film documentary about "Dynamite" Johnny O' Brien who is related to General Sheridan. He relates, in his ghost written autobiography, how his mother Bridget Sheridan said "we were friends, neighbours and indeed related to the parents of General Philip Sheridan." I was filming the New York portion of "A Captain Unafraid" this august. Here is a few Sheridan shots from our filming. Thanks again for the article! Christopher Park, New York is where the photos were taken. Heres a link to a blogpost I did about my travels in New York. I must put it up on the Wild geese when I get a chance. 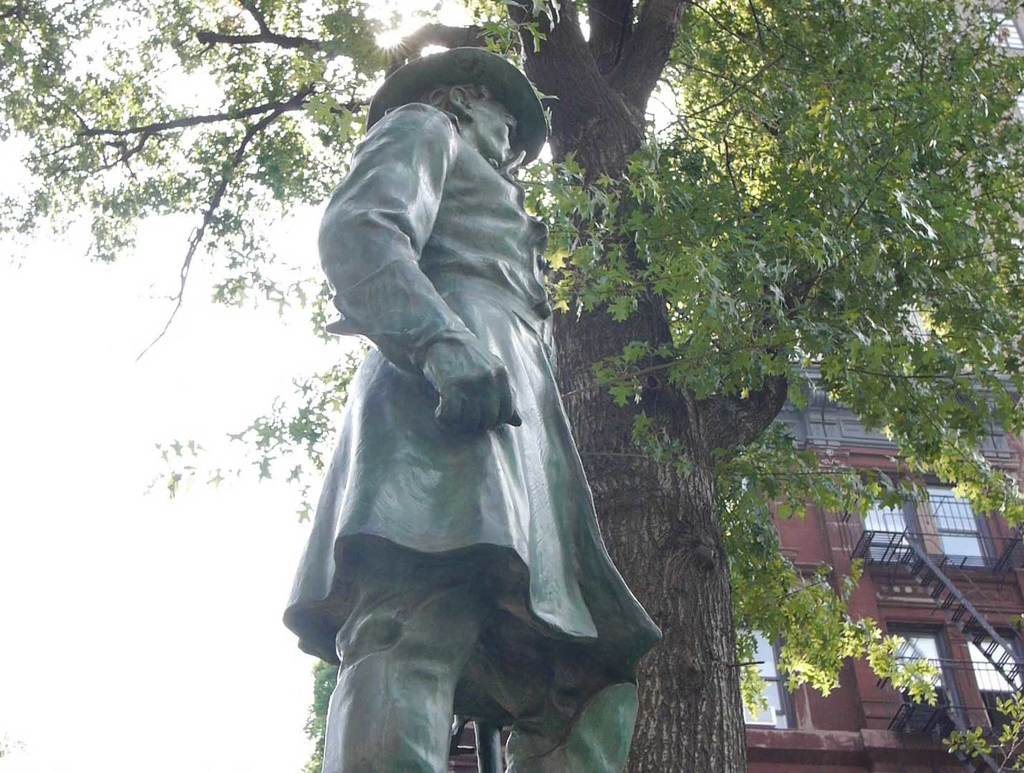 I have a 1928 article from the Anglo-Celtic Newspaper interviewing my grandfather, Matthew Smith, who was in living in Ireland at the time. The article states that the Smith family home was within 200 yards of where Sheridan was born. My now deceased uncles stated that their grandmother was a Sheridan. I haven't been successful in finding Killinkere birth or marriage information for that time.

A friend John Murphy received this message from a cousin of his, "Grandma Culhane;s mother was Margaret McSweeny Hickey McGarry and she was Phil's first cousin. Her aunt on her mother's side (don't know her name) was Phil's mother."

Can you add anything to this?  Take a look at my book, "The Civil War's Valiant Irish"  for Sheridan's feats during that war. It's available in softcover from Amazon as well as on kindle and Nook.

My father served in the 3rd and 11th US Cavalries from 1923 to 1928.  He then joined the Massachusetts State Police serving from 1928 to 1953.  He served on the MSP mounted detail and even taught equitation to new troopers.  He used to recite Sheridan's ride by heart to his six children at bedtime.

I am at a dead-end myself as regards tracing Johnny officially to the Sheridans. The records for Ireland are scant as you probably know. As regards Sheridan' birthplace... God only knows....some say at sea.... others say Ireland....others the U.S.  all have reasonable arguments. I'm not related to Johnny or Sheridan myself! I just share the same surname as Johnny. Incidentally, it's the 1000th anniversary of the O' Brien clan this year!

Congratulations on the 100th anniversary. You're right on as to the scant records.

In Sheridan's autobiography, he claimed to be born in Albany. It's been claimed he wanted to run for President and to do so, one has to be native-born. His mother has been quoted. for the many other birthplaces.

This is the quote from the 1928 Anglo-Celt newspaper, regarding my grandfather.  ... "who is the daughter of Mr. Matthew Smith, Beagh Upper, Parish of Uppr. Killenkere.  Mr. Smith resided in Philadelphia until a few years ago, when he returned to "the old home once more," which is situate within 200 yards of the house in Beagh Upper where the famous General Phil Sheridan, Commander-in-Chief of the United States Army was born and of whom was recorded historical events a few years ago in the "Anglo-Celt" written by the late Rev. Joseph B. Meehan, P.P. Killenekre, President of Breffney Antiquarian Society.

Based on the above and family stories, I'm sticking with Sheridan being born in Ireland.