My first big memory of my Uncle Charlie Clarke is when he arrived home from Naval duty after World War II. I was seven years old. Soon after, my granduncle, Patrick Joseph Clarke, appointed Uncle Charlie to be the manager at his saloon, P. J. Clarke’s, at 55th Street and Third Avenue in Manhattan.

Three years later in 1948, Granduncle Paddy met his maker and his saloon was sold to the Daniel Lavezzo Sr. family. Uncle Charlie might have moved on to a new career, but Mr. Lavezzo asked him to continue as the manager of the bar. He would remain in that position until his retirement in 1989 when he was sixty-eight years of age.

Uncle Charlie was one of my favorite Clarke uncles, of whom there were five. All of these men grew up over Clarke’s bar -- they and their parents, James and Mary Clarke, shared a cold-water flat with Paddy Clarke on the second floor of the saloon. Uncle Charlie had a reputation of being the cut-up in the family, having a quick wit, and getting into frequent trouble with his father who had become a widower when Charlie was six years old. Like his brothers, who at the time of their mother’s death, ranged in age from fifteen to three, he would be motherless from then on. His father, James, managed to keep the six boys together with the help of family and friends, even though, at one point, he wrote to a relative in Ireland saying that he might have to split the boys up.

Uncle Charlie graduated from a New York City high school in 1939, and he began working for Granduncle Paddy, learning the bar business. In 1941, after Pearl Harbor, he was drafted into the Navy, along with two of his brothers. The other three were exempt from the draft due to their occupations in the New York Police Department, the Fire Department, and the Jesuit priesthood. Fortunately, all three in the military survived the war.

It was Uncle Charlie who sat with me one day, recalling the time in 1945 when Hollywood director, Billy Wilder, arranged to use P. J. Clarke’s Bar as a setting for his film, “Lost Weekend,” about an alcoholic writer who goes on a binge due to his frustrations with his life. This event put Clarke’s saloon on the map, and, soon after, the place became a watering hole for advertising and media folks, as well as celebrities, such as the Kennedys, Marilyn Monroe, and Frank Sinatra and his "Rat Pack." It was during those celebrity years that my husband, John Molanphy, began working for Uncle Charlie at Clarke’s Bar. 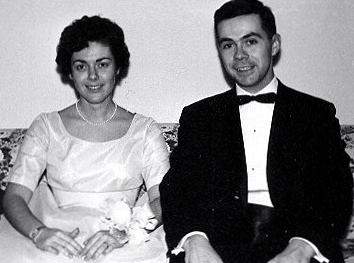 Left: Helen and John Molanphy at the Emerald Ball, March 1963

Under Charlie’s tutelage, John acted as a assistant manager while he was in college in the 1960s, and, later, when he was between advertising positions during the 1970s. John always remembers how great Charlie was to work for, never too demanding, and always patient, even under pressure. He was very respected by all the staff for his fairness, and they knew that they had to perform to his standards. Uncle Charlie used the schedule as his means of control over his staff, writing the schedule in pencil on a sheet of graph paper that was posted inside the door leading down to his basement office. If a member of the staff did not perform up to Charlie’s expectations, he might find that his name was removed from the schedule for a time. Another technique Charlie used was to divide his time between the day and the night shifts, so he would be able to see what was occurring at all times. The men never knew when their boss might appear, keeping them on their toes.

For Christmas of 1975, Uncle Charlie arranged to have a drawing made of the front of Clarke’s at the holidays. He used the picture for his Christmas card that year. Readers can see a copy of that card at the top of this page. It is a lovely memento that I keep at our home here in Santa Fe. Christmas time at the saloon meant that shoppers from Bloomingdale’s, Bergdorf Goodman, Bonwit Teller, and Lord and Taylor occupied the tables for lunch or for a late afternoon drink. During the nights, the bar was filled with revelers coming from their office Christmas parties, and with out-of-town visitors in for the holidays. Christmas music was being played on the old jukebox.

P. J. Clarke’s was one of the few places that stayed open on Christmas Day, so the place was especially busy that day. Due to this, Uncle Charlie asked my husband to step out of his normal routine and take a place on the floor as a waiter. John was very happy to do so as he liked people and the prospect of the tips from the holiday crowd pleased him as a father of three boys. I was disappointed that John would not be with us for Christmas dinner with my family but I understood his desire to help Uncle Charlie with the busy day.

I also saw that he wanted to be in on the action at the saloon. Little did we know that this decision would backfire. When John arrived at Clarke’s, he found that the owner was going to help out as well, serving some of the customers in the saloon’s back room. This turned into a debacle as the owner, a fast-moving gent, found John’ s lack of experience on the floor annoying, and he told Uncle Charlie never to let him work the floor again. Uncle Charlie was very kind to John and let him down gently, as was his way.

Shortly after, John decided to accept an offer to work at an advertising firm in Dallas, Texas, as a good career move. Uncle Charlie took me aside and told me that he thought this was important for John, even though it meant that our family was moving far away from our home in New York City and our favorite bar. The move to Dallas turned out to be good for our family, a story that I am writing about in my second memoir entitled,"Through the Ladies Entrance: From Saloon to Cloister, Maximum Security Prison to the Open Fields of Ireland." The book is awaiting a good publisher. I hold many fond memories of Uncle Charlie, especially his wonderful sense of humor, as well as his courage in overcoming the obstacles that he met in life. This Christmas, John and I will toast to his life, with the picture of Clarke’s at Christmas time in full view.