Constance Gore-Booth Markiewicz’s amazing life came into my purview on my second trip to Ireland in 1989.  My husband and I were browsing in a Dublin bookstore eager to buy as many books on Irish history as we could fit in our suitcases for our return to America.  Back at our hotel, I opened one that covered the Irish uprising of Easter week 1916.  On an insert I found a picture of a woman dressed in a soldier’s uniform, packing a gun by her side.  It was Constance, a woman who despite her wealth and upbringing, battled almost two decades for Irish independence from the British government.

Constance was born to Anglo-Irish parents at Lissadell estate in County Sligo in 1868.  Early on, she revealed the talents and characteristics that would make her a heroine in Irish independence circles.  Constance was a natural leader who loved adventure and risk-taking.  Besides her artistic and dramatic skills, she could keep up with the male gentry on horseback and in sharpshooting.  The tenants on her family’s estate called her a “wild, generous, Irish girl.”

Constance’s life changed after she arrived in Paris in the late 1890s to study art.  There she met Polish Count Casimir Markiewicz who was an artist and dramatist. The couple married in l900, and Constance gave birth to their daughter, Maeve, the following year.  The Markiewiczs settled in Ireland where Constance’s mother, Lady Georgina Gore-Booth, helped take care of Maeve, allowing Constance and Casi to participate in the cultural activities of Dublin. This freedom also gave Constance the time to meet the growing number of Irish nationalists, including the socialist leader, James Connolly.  As a result, Constance became a leader in Sinn Fein, founding a group of boy scouts, and joining Connolly’s Citizen Army. Constance, the Anglo-Irish set stopped hiring Casi for portraiture work and, when the local stage owner banned Constance from the theater, Casi lost a second source of revenue.  In l913, Casi decided to return to his homeland in the Balkans and become a journalist; his plans were interrupted when he enlisted in the Russian army during World War I and was injured.  He did not see Constance until l924 when he was sent as an envoy to London on behalf of his Polish people and took a side trip to visit Constance in Ireland.

Casi had supported Constance in her nationalist work, even though he considered the movement too radical for his tastes.  During the Easter uprising of l916, he was reestablishing himself in his Ukrainian homeland. The Markiewicz’s daughter Maeve, now fifteen years of age, was alienated from her mother because of Constance’s political activities that flew in the face of Maeve’s Anglo-Irish upbringing.  The only family support that Constance received during the Easter uprising and the years after came from her sister, Eva Gore-Booth.  And therein lies a story of sisterly love that lasted all of their lifetimes.

During the Irish nationalist Easter uprising of 1916, Constance had participated by holding a group of British soldiers at bay near St. Stephen’s Green.

Following the failure of the rebellion, Constance was arrested along with the main leaders of the movement.  She was imprisoned in Kilmainham Jail where she could hear the cries of her brothers-in-arms as each one of them was shot without a trial, and later buried in unmarked graves.  While Constance was originally sentenced to death as a traitor, she received a reprieve due to her gender, and most likely, her class. 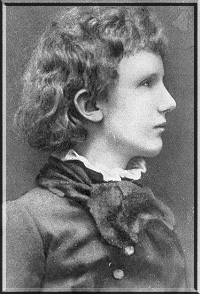 Eva Gore-Booth (left) was frantic, having heard a rumor that Constance had died during the fighting of Easter week.  She declared that this was a better end for Constance, rather than being shot by a firing squad as a traitor.  When she learned that Constance was still alive, imprisoned in Kilmainham, she went immediately to her side.  Even when the authorities moved Constance to Mountjoy prison in Dublin, and later to Holloway in London, Eva pursued her trail.

When Eva visited Constance in prison in Holloway, she was still disturbed that her sister had resorted to violence for the nationalist cause, as Eva herself was an ardent pacifist.  Until the Easter uprising, Constance had kept her political and military activities secret, knowing that Eva would have been troubled by them.  On her Holloway visit, Eva brought Constance a warm woolen cape, art materials, and a journal.  The latter would allow future generations to read of the ordeal Constance had at Holloway, a place she described as far worse than Dublin’s Mountjoy prison.

After her release from Holloway in 1917, Constance continued her nationalist agenda, enduring the price of alienation from her Gore-Booth family, except for Eva.  She also lived through several more imprisonments, the last one in l923, where she survived her only hunger strike.  Through it all, Constance declared that she could not have done her work without the support of her sister Eva.  Constance died from appendicitis a year after Eva, with Casi and Maeve at her bedside. Friends felt that the loss of her sister in l926 took much of her energy that she had so ardently displayed for what she called the “love of Ireland.”

In l989, intrigued with the story of Constance and her family, I collected as much biographical material as possible.  Time passed.  Then, in 2007,  I attended a writer’s conference where the subject of Constance’s life came up during a journalling day.  A woman at the conference told me that I had to write about Constance.  At the time, I was working on a historical novel utilizing the story of my grandaunt Alice who led an interesting life, having returned, after years in New York City, to Ireland.  It occurred to me that Constance could be woven into this tale.  As it turned out, my novel, Leaving Lissadell, turns primarily on the life of Constance, with my grandaunt playing a fictional role connected to the Gore-Booth family.

My literary agent in Bangor, Northern Ireland, is trying to find a home for Constance’s story.  An historical novel is a fine venue for her tale, and will provide her with a wider audience than she has had so far.

Not wanting to take way  from her part in the Rising, I think her work on behalf of the poor is more outstanding.

Comment by Katarzyna Gmerek on June 14, 2015 at 8:34am
May I say, Casimir Markiewicz's home was not in the Balkans, but in Zivotivka, eastern part of the Ukraine. After the Polish-Bolshevik war it was left behind the eastern border of Poland (Treaty of Riga, 1921). At the beginning of the WWI, Kazimierz was in the Balcans as a journalist, though. I could recommend an excellent biography by Patrick Quigley, The Polish Irishman, the Life and Times of Count Casimir Markiewicz, Dublin, The Liffey Press, 2012. The book is also a good source of information and anegdote about the Countess Markiewicz, with many photographs and reproductions of paintings.

Comment by Michael Quane on June 15, 2015 at 7:38pm
Well told. Helen. I do recall reading a biography of "The Red Countess" some years ago, which also covered her work for the poor after the Civil War. I also was struck by its statement that she bitterly protested being exempted from execution after the Easter Rising because of her sex.

Hope the novel is published. I will certainly purchase it.

I found her during my first trip to Sligo, Ireland n 1999 while visiting Lissadell House and have been intrigued by her ever since. Would love to see a movie made of her life.

DearJudi, I would love to see a screenplay developed as well- still waiting on my agent to see if he can find a home for leaving lissadell

that is wonderful that you visited Lissadell House - thanks for writing