So went a popular children’s rhyme in Ireland at the turn of the 20th century. I can hear the echo of those words spilling from young lips all the way to here. In amongst the childish innocence, however, is a terrible truth that cost the life of a woman and made her name a byword for superstitious beliefs.

In a week when tales of witches and spells are used to entertain our children as they prepare to go trick or treating, it’s worth remembering that there was a time, not too long ago, when such stories could spark very real and dangerous repercussions.

Bridget Boland, pictured, was working as a dressmakers’ assistant when she first met her husband-to-be, Michael Cleary, who worked as a cooper. They married in 1887 in the townland of Ballyvadlea, in County Tipperary, when she was just 17 years old. Bridget was an industrious, independent young woman – she kept her own chickens and sold them to neighbours, and she had her own sewing machine with which she made dresses.

The couple, together with Bridget’s elderly father, Patrick, moved into a labourer’s cottage. Despite it being the best house in the village, there was little interest in the property as it was said to have been built on the site of a fairy ringfort.

Tradition has it that such forts are imbued with mystical powers. For some, they are seen as entrances to another world, and to build upon them is considered by believers to be a very foolhardy thing to do.

Bridget, Michael and Patrick lived quietly there for almost eight years, but everything changed in March 1895 when Bridget was taken ill. After more than a week, Bridget hadn’t improved, and the doctor was summoned.

This was not actually Bridget ... but some form of fairy changeling who had taken her place.

The physician prescribed medicines, but things seemed to be going from bad to worse, and soon the priest was called to administer last rites.

Friends and family visited the house and attempted to treat Bridget with their own remedies. With nothing seeming to help, and with suggestions that fairy spells may be the cause of Bridget’s malaise, Michael formed his own deadly diagnosis.

This was not actually Bridget they were treating, he concluded, but some form of fairy changeling who had taken her place. Michael wanted his Bridget back and he would do all in his power to get her.

He tried to force feed his wife, to no effect. Then, urine was thrown on her and she was carried before the fireplace to cast the fairy out. Bridget may have been sick, but she still had enough of her senses to tell her husband that the only person away with the fairies was himself. She begged him to stop.

But Michael wasn’t listening. He threw her to the ground and threatened her with a burning piece of wood. And that’s when Bridget’s nightdress caught fire. 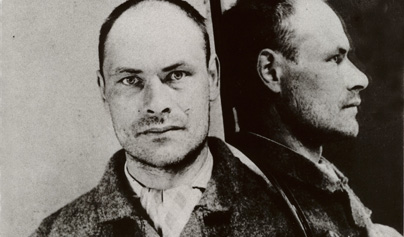 With her screams of panic ringing in his ears Michael Cleary (pictured) set about finishing what had been started and decided to destroy this changeling now squirming before him. In his hand he held an oil lamp, the contents of which he then tossed onto his wife’s body.

Those present watched as the flames consumed her. Michael kept them at bay, assuring them all that he would now be able to get his wife back. And so they gathered around, their faces lit up and their ears closed to the agonised screams as Bridget Cleary burned to a crisp.

In the days that followed rumours spread about Bridget’s disappearance. The police began a search. They questioned Michael, who told them that she had been taken by the fairies. He appeared to be sitting in vigil as though awaiting her return.

His lawyer must have put up a convincing defence because in the subsequent trial, Michael was only found guilty of manslaughter, and charges against the other defendants were largely dropped, although four were convicted of ‘wounding.'

Michael Cleary was jailed for 15 years. After his release on April 28, 1910, he went to Liverpool and then emigrated to Montreal on June 30 of the same year.

It is a widely held view that those involved in this horrible death genuinely believed they were doing the right thing … such is the power of folklore and myth in some societies.

I love Halloween – it is my birthday after all (which might explain a few things), but at this time when bonfires blaze and tales of spooks and goblins abound, spare a thought for poor Bridget.

Hers was a peculiar kind of fairy tale – that of the Irish changeling who paid with her life for the superstitions of others.

I sometimes forget how seriously some people took/take their superstitions! Poor Mary!

It did not only happen in Ireland, either. Remember Salem....

Yes, there was also the last witch trial in Ireland in 1710 at Islandmagee - see https://goo.gl/F0wUmA

No, it doesn't.That's what I find so shocking about it, too

A great story; the poor woman, but some first-rate history!

Thanks for reminding us all of this story again. (And happy birthday by the way…)

For people who want more depth to the story, about 14 years ago Angela Bourke came out with a pretty decent academic book about the events & social conditions that led to Bridget Cleary's death. Bourke takes an economic look at the social conditions of the day and basically argues that although Bridget is remembered today because her death basically became a symbol of Old Ireland's superstitions, during life Bridget was making tentative steps towards becoming a woman of "New Ireland" --she was economically and culturally ambitious, and a little bit more worldly and sophisticated than her husband or many of her neighbors. (Apparently Bridget became the talk of the county in the last year of her life because she wore a "city style" hat to church.)

One of the other tragedies of Bridget's death is that it became a real international news story and the trial in general became a real black eye for Ireland and the international Irish community. I first learned about Bridget Cleary as a college student researching a local history project using old San Francisco newspapers. The death of Bridget Cleary and the trial of Michael was covered extensively by the international press. A lot of opinion writers used the trial as an excuse to put Irish culture in general on trial. The outcome of the trial --the fact that Michael got such a light sentence and almost everyone else got off-- was widely criticized. The negative press about the trial was so overwhelming that a lot of Irish-American politicians and policemen (mainly the higher ranking officers) went on the record and said they would never tolerate anything like the Cleary fiasco on their watch. In some ways Michael Cleary's sentence --which was seen as appalling lenient in the United States-- probably helped inspire an entire generation of Irish-Americans to take a very hard-line approach to prosecuting crime.

Thanks Sarah.Very interesting take on the trial, and its impact in America. You might find this interesting https://goo.gl/F0wUmA It's an account of the last witch trial in Ireland.