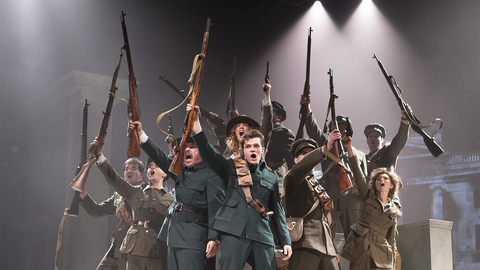 This show was made in Ireland for broadcast on PBS. It's going to Broadway next year. It still hasn't been broadcast in Ireland.

Pictured, a shot from 'The Bloody Irish' broadcast on PBS.

At the end of the play, 'Maxwell' sums it all up by saying, in effect, "They did what they had to do, and I did what I had to to."

Or to speak plainly, there was no difference between fighting for freedom and fighting for the British Empire.

Surely then, Bobby Sands did what he had to do and Maggie Thatcher did what she had to do.

This might not matter, except that it is going to shape what Americans think about 1916 and the fight for Irish freedom. After all, more Americans are likely to see it on PBS or on Broadway than will ever read any book on 1916.

But that, of course, is exactly as it's supposed to be.

The show debuted on PBS in October. Check your local listing for times when it may be shown again.

Could not agree more Sandy.  As a bit of eye and ear candy it was certainly entertaining, but as something purporting to tell the story of the Rising it was a Politically Correct disappointment.  To have General Maxwell as the narrator and portrayed as a loveable Col. Blimp is something out of Mel Brook's "The Producers".  Putting aside the execution of the seven signatories and seven other men; let us not forget that General Maxwell also orchestrated the cover-up  of the murders committed by Captain Bowen Colthurst and the North King Street Massacre by the South Staffordshire regiment.

As to the music, conspicuous by its absence is one song we know was sung during the rising, "God Save Ireland" which was sung by Cathal Brugha  as he defended his position at the South Dublin Union, despite having received over 24 life threatening wounds.  "God Save Ireland" was also considered a National Anthem prior to being replaced the "The Soldier's Song".

I have to agree with you Neil and Sandy. Though it has not aired here in Ireland yet i gather it is very professionally produced. I am scratching my head on why you would have someone as reviled as Maxwell as narrator. People might get a better idea of the man from our film A Terrible Beauty which you can check out on www.1916film.com.

For those interested in Irish American stories we have just completed a short documentary on Tommy O'Connor- A couriers Tale which you can also find on www.1916film.com or on storiesfrom1916.com

Dave Farrell , I had the opportunity to met your brother Colin , earlier this year . He gave me a copy of A terrible Beauty , which I thoroughly enjoyed.

Neil F Cosgrove ; agree with you that it was  most defiantly a Political Correct disappointment . Why ,oh why,  can Producers not tell the story as it really was. Forget about Political correctness

Political correctness + music + a sanitized watered down version = larger profit.  It is always about the money, as the Roman's would say when faced with a question like this,.... who profits from this ??? I'll get me guitar and play some songs and relay stories my grandfather's and grandmother's told me about our families to my son Sean and that's what really counts, isn't it?

Slainte ! & Nollaig Shona Dhuit to all

Richard , if your grandmother/ grandfather told you the stories, than I would rather listen to those stories , because they will be the unvarnished truth. My grandmother told me a lot of stories, which I have attempted to ;give a correct version of her truth , in , That's Just How it Was....
Depending on which history books/ documents ;we read, we get varying opinions of different ;scenarios of our history by differing historians .No wonder when a crime or a road traffic accident occurs ; the police are hesitant to take witness statements as the gospel truth .

Go get that Guitar out and lest be having those unvarnished stories !!!

Music has always been a big part of my families gatherings. Every evening my son, Sean, and I have our music hour mixed with stories and tall tales. I teach my history classes, sometimes using my guitar and folk songs that show the passion within history not just names and dates of people and events. I tell my students that I don't see America as a "melting pot" but more like a grand stained glass window. The beautiful image of America made up of many individual pieces of stained glass representing a particular culture, all held together with the "lead" of our Constitution. I see it as our duty to keep this beautiful image crisp and clean by polishing our individual colored glass, and if everyone does this the overall image of America will remain bright with a clear meaning for all.  Well enough of the ramblings of this auld Irishmen, Slainte and Nollaig Shona Dhuit !