The whole day that I spent in Belfast and the evenings on either side really need more than one blog post. That day we went to so many places and I was shown so many things. It was mind-blowing and at times very emotional. Belfast is a lovely place and I was certainly shown a good time.  We started with breakfast, as the night before was a big one and we needed to fuel. The café with adjoining book shop was Cultúrlann. From their website: “Cultúrlann produces a vibrant Arts Programme that promotes Irish language and culture while creating an attractive meeting place for tourists and locals alike.”

It was a yummy breakfast with Margaret, her best friend Mary, and wee Belfast lady Sophie. I could have spoken to Sophie for hours and she was only two. The pumpkins on the wall and the Halloween decorations at the front counter reminded me that Halloween was coming and I would be flying out on the Harvest Moon. This would be the first total lunar eclipse seen from Ireland in seven years and coincided also with a Supermoon. Triona had said it was a shame I wouldn’t be here for the Harvest, apparently good craic. 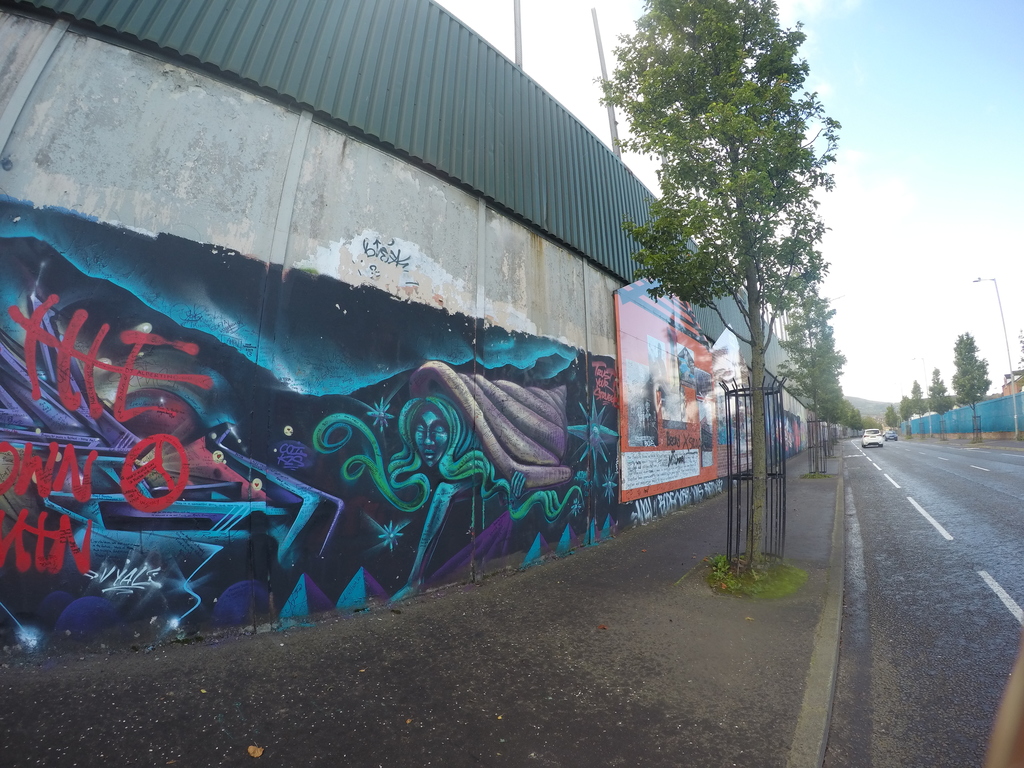 After breakfast in Cultúrlann, the grogginess from my travel and ingestion of Baileys lifted, and I was chaperoned to local spots to learn and pay my respects. I was stunned by the height and length of the wall that still separates the Catholics and Protestants. It would probably never crumble and now is a place where people go to sign their name, leave a message or do some pretty sweet graffiti murals.

My connection to my host, Margaret, from Belfast is a little complex. My mother and her father, Jim (RIP), were cousins, well, they called each other cousins. I found out recently they were in fact second cousins, and shared great grandparents. Mum and Jim were both singers -- apparently, he was incredible. My great uncle James, who became my mother’s legal guardian when she ran away from home at 13, was trying to help Jim with his career.

We went to Clonard Monastery (pictured), where Jim used to sing as a boy. Clonard is also used as a music venue for many festivals in the city, most notably Féile an Phobail and holds an annual Novena which attracts over 100,000 tourists, Catholic and Protestant, from Ireland and Europe every year (Wikipedia). It’s an amazing church, very ornate and all I wanted to do was sing a few bars. The church and adjoining monastery was developed by the Catholic Redemptorist order. Strangely enough, when I was born I was first held by a Redemptorist priest who blessed me and gave me to my mother. He was brilliant and rode a motorbike. We also did a trip to St. Peter’s Cathedral, which has a really pretty, bloody huge pipe organ. 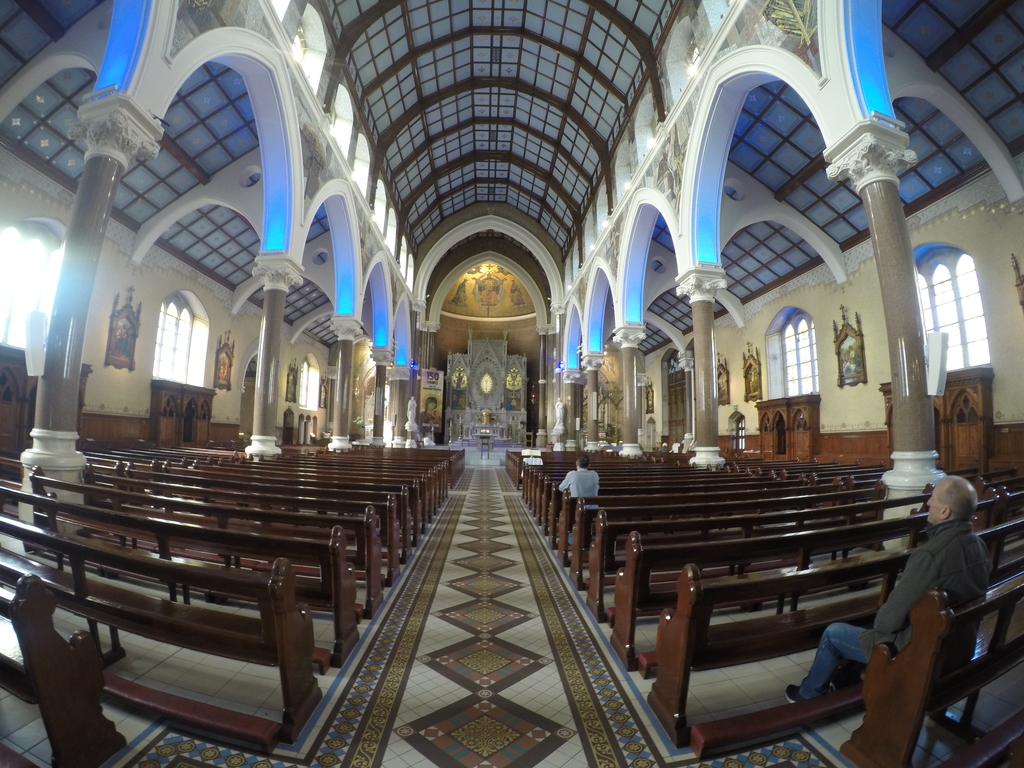 Around the time my mum and dad started going out, “cousin” Jim met Maura. For a spell, Jim and Maura lived in Scotland and my mum and dad were godparents to their second child, Jim. Shortly after, they were back in Belfast and my parents stayed in Scotland. Then my parents left Scotland for Australia. They tried to get Jim and Maura to move to Australia with no success. 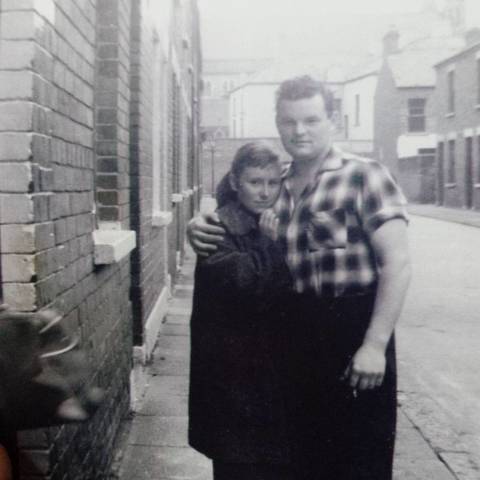 In 1971, Maura was shot dead on the Falls Road. Her sister Dorothy was sitting beside her -- she was 19. They couldn’t have an open coffin for Dorothy because of the state of her injuries. I saw her injuries in my travels through Belfast at the Irish Republican Museum. There, in a glass case was mum's “cousin” Jim looking battered and the two murdered women. Such a devastating image! Maura left four young children behind, and a bomb planted at her wake meant a move for Jim and the kids. The British marksman left two others in the car untouched, and then the Green Jackets claimed that they thought the women were men and that they were wearing men’s clothes. I’l give you a moment to let that sink in. Oops, sorry we thought they were men. In this grisly image, it is clear they are wearing women's clothes. The women were warning of coming raids probably with even more passion as internment had begun.

Operation Demetrius was an operation in Northern Ireland on August 9-10, 1971. It involved the mass arrest and internment of 342 people suspected of being involved with the IRA. Many had no links with the IRA. It was proposed by the Northern Ireland Government and approved by the British government. Armed soldiers launched dawn raids throughout Northern Ireland, sparking four days of violence. Twenty civilians, two IRA members and two British soldiers were killed. Ulster loyalist paramilitaries were also carrying out acts of violence, which were mainly directed against Catholics and Irish nationalists, but no loyalists were included in the sweep. 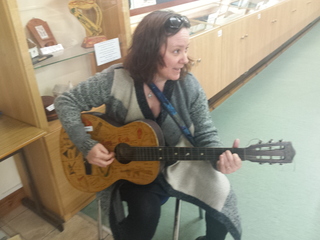 I was handed a guitar to play, as music happens in almost every corner of Ireland. It was signed by inmates from Long Kesh and dated 1972. I strummed a few chords. Only E major worked, but it came out sad and minor. It was like playing a sacred instrument. I wondered about the men who had played this and how music had perhaps helped them rest or roused their spirits. By 1972, there were 924 internees at Long Kesh. I was also taken to a bar which had a memorial garden outside dedicated to the women who died during “The Troubles," including Maura and Dorothy. Outside was also a ststue of Ću Chulainn. At the age of 17, Ću Chulainn defended Ulster single-handedly against the armies of queen Medb of Connacht, in the famous Cattle Raid of Cooley. It was prophesied that his great deeds would give him everlasting fame, but his life would be a short one. He is known for his terrifying battle frenzy, or ríastrad. During his time abroad, Cú Chulainn had rescued Derbforgaill, a Scandinavian princess, from sacrifice to the Fomorians. She fell in love with him, and came to Ireland in the form of a pair of swans to search for him.

Cú Chulainn, not realising who she is, shoots her from the air with his sling, and then saves her life by sucking the stone from her side. He now cannot marry her because he tasted her blood, so he gives her to his foster son, Lugaid RIab nDerg, who goes on to become High King of Ireland. The Lia Fáil fails to cry out when he stands on it, so Cú Chulainn splits it in two with his sword. When Derbforgaill is mutilated by the women of Ulster out of jealousy for her sexual desirability and dies of her wounds, Lugaid dies of grief, and Cú Chulainn avenges them by demolishing the house the women occupy. Irish nationalists see him as the most important Celtic Irish hero, and thus he is important to their whole culture.

During the day, I was able to visit the graves of Maura and Jim and deliver some roses for Maura's son and my mum. I found this family I had heard so much about only in the past two years. Jim had died in New York. Mum and Dad visited Dublin last year and caught up with their godson, Jim, for the first time since his baptism 50-odd years ago. My time in Belfast was short, action-packed and sweet. The Kennedy men were lovely and the women beautiful. Belfast was a sacred site, full of stories and banter and music. The last evening in Belfast was spent checking out music and going to a music session in a bar. The musicians were a happy, cheeky lot and I got to sing with them. My go-to song is "Down By the Salley Gardens," and after that they made me sit among them for "Danny Boy." These moments when you are singing in an Irish pub and they join in and harmonise are like heaven. They sang a rude ditty after this that was stuck in my head FOR DAYS. “Get your knickers down … to the laun-da-ree!” Funny and cheeky just like the musicians. If you go to Ireland MAKE SURE YOU HAVE A SONG!! If you don’t do anything else, go learn your song and get yourself to Ireland! Goosebumps all over. Well done 'my Frannie.'

Heart warming story.  The Republican  Museum (Eileen Hickey Museum) on Falls in the Conway Mill complex is an absolute must for any visitor to Belfast.  We never tire of it and there is always something new to see.  Johnny Hackett is so proud of this and will give anyone interested a tour.