An Irish-American Family's Huge Sacrifices in World War I I have lived in Greenpoint, Brooklyn for decades, yet somehow I was oblivious to the fact that McCarren Park has a Nulty Square. Knowing that Nulty was an Irish name, I became curious about the person’s identity and uncovered a long-forgotten story of a family of Irish-American heroes and their grieving mother.

I found out pretty quickly that T. Raymond Nulty was a fallen soldier in World War I, but I decided to dig deeper through archived editions of the Brooklyn Daily Eagle, and slowly I was able to piece his story together. His mother, Mary Nulty, was a Greenpoint mother of six children -- three boys, and three girls.  Her second son was Thomas Raymond, but the family called him T. Raymond to avoid confusing him with his father. His name appeared three times in the paper.

Young Thomas Nulty was a standout student at Saint Anthony of Padua School in Greenpoint. T. Raymond Nulty’s name appears in the Daily Eagle, citing him for reciting a poem in an event at Holy Family Church, receiving honors for an oratory contest and playing a role in the school’s drama club.

When America entered the world war, all three of the Nulty Boys enlisted, though none of them had yet reached the age of 21.  Thomas Raymond and his brother John enlisted in the famous “Fighting  69th Regiment. The Nulty boys were exactly what regiment organizers -- “Wild Bill” Donovan and Fr. Francis Duffy -- were looking for. Though the “Fighting 69th became legendary for its Civil War heroism, in some circles of the American military, the Irish regiment had a dubious reputation for brawling and drinking.  Donovan and Duffy decided to create an elite unit and chose the flower of New York Irish-American youth,  clean-cut, athletic, and intelligent men from good families. The Regiment would again demonstrate legendary valor in battle while taking huge casualties and later become the subject of a hit Hollywood film.

Thomas arrived along with the other members of the 69th in December 1917 and served as a machine gunner. He must have been a good soldier because he was promoted from private to corporal. In July 1918, the 69th was sent to the Marne along with other American regiments to stop the German army from advancing to Paris, which the American forces did. On the night of July 26, German forces pulling back from the Marne Salient reached the River Ourcq. There they formed a line on the River’s far bank, hoping to slow advancing American forces, while their comrades withdrew. Nulty’s 165th Infantry mistakenly believed the Germans to be in full retreat. When the New York soldiers crossed the river July 28, they learned that the Germans hadn’t retreated and held a strong defensive position. The Germans had blown up two bridges over the Ourcq near Sergy; the stream was swollen with rains to a width of 14 meters and a depth of 4 meters, so crossing the river would be challenging. As they crossed the swollen river, machine guns opened on the 69th from directly in front and from a farm on the flank as the Ourcq quickly ran red with the blood of the Americans.

The 165th Infantry crossed, fought heroically, and established the first foothold on the eastern bank, but Corporal Nulty did not make it, dying July 28. He was only 20 years of age.  The young Irish-American corporal was buried along with tens of thousands of other soldiers in an American military cemetery in France. A soldier was dispatched to the Nulty home to give Mary and the family the grim news from France. One can imagine the shock and horror Mary must have gone through as she received this awful news. 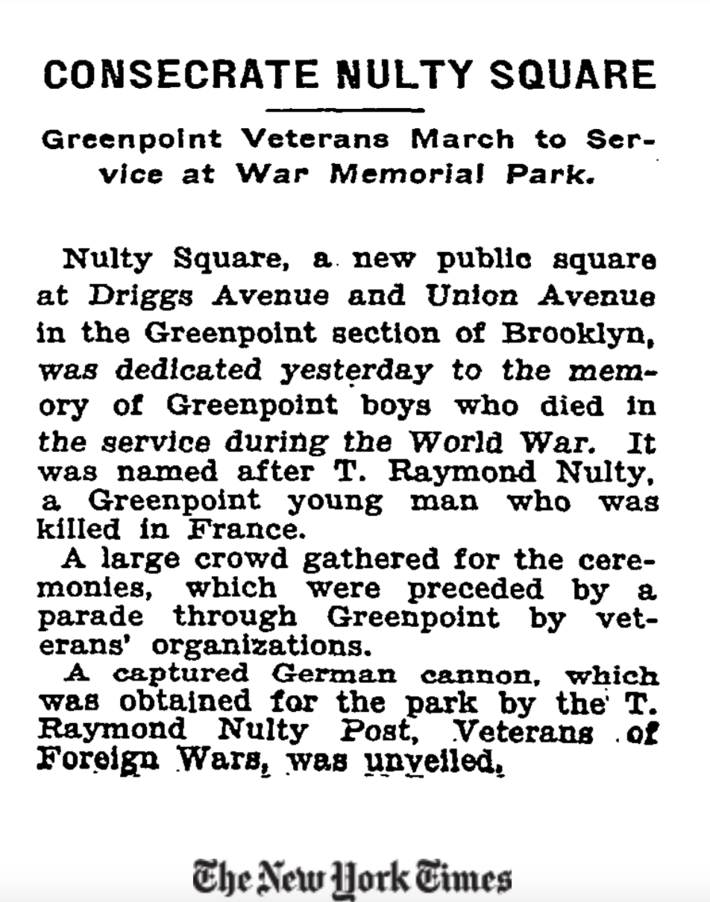 Nulty was one of 108 young Greenpoint men who paid the ultimate price, but Nulty must have been someone special, for those who returned from the war named the local chapter of the Veterans of Foreign Wars in his honor, but this was not the only grief that Mary Nulty would bear. His brother Edwin, who had served in another regiment, made it home, but he was sent to a veteran’s hospital stateside and died suffering with every breath he drew, a victim of poison gas. He told his mother that he wished he had died like his brother in combat. Only the oldest brother John Nulty remained alive. At the end of the war, Mary must have longed to see her son’s grave, but the Nulty family were working-class, and such a trip was beyond their means.

Mary Nulty did many things to honor her fallen son. She founded a gold medal at Saint Anthony of Padua in T. Raymond’s name for a student who excelled at religious studies. She also became part of a massive local movement to honor the dead with a war memorial, which still stands in McGolrick Park. On May 23, 1923, Mary was one of 97 Gold Star mothers who were present at the unveiling of a beautiful World War I memorial sculpture, a bronze winged victory by German sculptor Carl  Augustus Heber.  The statue depicts a female allegorical figure, holding aloft a modified laurel, symbol of victory, and in her right hand supporting a large palm frond, a symbol of peace. The granite pedestal is inscribed with the names of battle sites in France. Three hundred uniformed veterans sang "America" as the VFW chapter named for her son stood at attention dressed in their military uniforms.

(Below: Greenpoint World War I memorial) 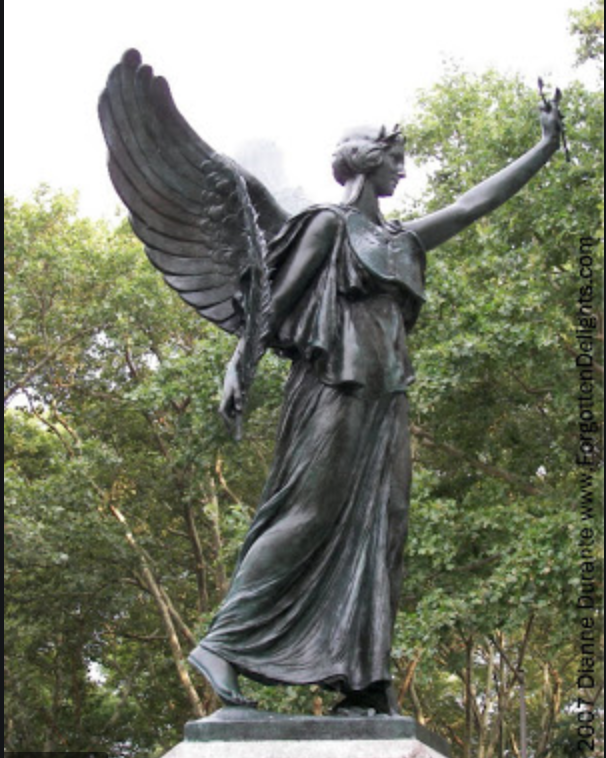 Later that year, they dedicated Nulty Square in McCarren Park. October 26, 1923, Mary was asked to pull off the American flag covering a battle-scarred 105-millimeter German gun that was unveiled next to a memorial flagpole in front of the Second Battalion of the 69th Regiment. "Taps" were played, and a volley was fired by the Nulty post.

Twelve years later, Mary Nulty was featured in an article about Brooklyn Gold Star mothers who had never been to France to see the graves of their fallen sons, where Mary said, “ It’s not nice to think about a son buried somewhere in France.” The article announced that the government would fund the journey to the military cemeteries in France, where  Mary’s son, and so many other Americans, lay. I hope that traveling to France and praying by her young son’s graveside brought Mary some peace.

Her only surviving son, Joe, died 9 years later at age 43. Sadly, Mary lived long enough to bury the three boys she had sent off to the war to end all wars. Now, I will never walk by Nulty Square and not think about the Nulty family, who suffered so much for America.

The Irish in New York: Profiles of Irish New Yorkers Who Have Shaped The Empire State