(Above: Celtic Park where Sheridan and other Irish American athletes trained.)

It is easy to think that we are in new territory with the pandemic, but a century ago, New York City was also gripped by a pandemic, the dreaded Spanish Influenza that killed 20 to 50 million people worldwide. Here in the U.S we lost by some estimates 750,000 people and a quarter of the population got infected. One of the victims was a New York City Cop and Olympic Gold Medal weight thrower, Irish immigrant Martin Sheridan who was struck down just shy of his 38th birthday in the prime of his life. Sheridan was part of a famous group of Irish immigrant Olympic medal winners known as the Irish Whales who honed their skills in the former Celtic Park in between the areas of Sunnyside and Woodside.

Today two gold medals from the 1904 Olympic Games in and one from the 1906 Olympics in Athens rest in the  USA Track and Field  Hall of Fame History Gallery, in the 168th Street  Armory  Manhattan. They were won by  Mayo Immigrant Martin Sheridan, a five-time Olympic medalist, who was heralded by the New York Times as the greatest all-round athlete of his day. Sheridan, a gifted track and field athlete who was unequaled in the shot put and other throwing events, was part of an amazing group of Irish American athletes dubbed “The Irish Whales,” who became internationally famous for their achievements at the Olympics Games.  The Whales included the first athlete to win three successive gold medals at the Olympics John Flanagan, shot putting gold medalist Pat McDonald and hammer throw gold medalists Paddy Ryan and Matt McGrath.  Sheridan, like his fellow whales, became a New York City Police officer before his premature death at age thirty in 1917.

(Below: Left to right - John Flanagan and Martin Sheridan of the Irish American Athletic Club and James Mitchel of the New York Athletic Club at the 1904 Summer Olympics.) 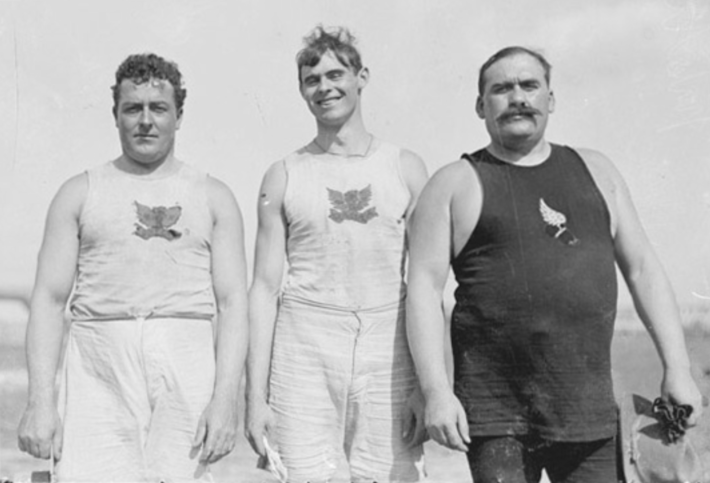 Martin Sheridan was born in Bohola, Co Mayo, on March 28, 1881, to farmers Jane and Martin Sheridan. The youngest of seven children, in a family of four boys and three girls, Sheridan grew up in a very political family that was deeply involved in the land war convulsing the west of Ireland. His grandfather, grandmother, father and were avowed enemies of the British landlords who exploited Irish peasants.  Martin’s uncle, P.J. Sheridan, became a founder member of the Land League in Mayo, collaborating with Davitt and Parnell. Sheridan’s father came under suspicion of the law on many occasions and the police searched the Sheridan house for arms. Not surprisingly, Sheridan became an avid, lifelong Irish Nationalist and strong backer of Ireland’s struggle for freedom.

Martin attended national school while working on his father’s farm. He enjoyed life on the farm and grew strong there while perfecting his athletic skills, which would earn him fame in later years. Martin’s athletic prowess became evident even as a young boy. He threw heavy stones in competition with other boys, but Sheridan far out-threw any of the others. After finishing school, with few chances for employment in Mayo and emigration seemed like his only option. Martin just aged 16, emigrated to New York in 1897, and found work as a trolley-car driver.

Martin was introduced to athletics by his older brother Richard, himself a great discus thrower and American champion in 1898 and 1899. A year after Martin’s arrival, Irish emigres founded the legendary Irish American Athletic Club in Queens and the Sheridans became members. The club, though open to all people was athletically elite. From 1900 to 1924, members of the club won an astounding 54 Olympic medals, including 26 gold medals. At 6’3 and 195 pounds, Martin proved to be the club’s best discus thrower and shot putter, but he also showed his amazing versatility by excelling in the high and long jumps, javelin, and pole vault.

He first made a name for himself in 1901, when he won a discus competition in New York. By 1904, he held the American discus and shot put titles and was chosen to represent the United States at the Olympic Games in St. Louis, Missouri. Sheridan won gold in the discus throw, sharing first place with Ralph Rose as they both threw identical distances of 128′ 10.5,” the only time a tie occurred in the history of the Olympic discus. Three weeks later, Sheridan smashed the world record, throwing 133′ 6.5.”

In 1906, Sheridan joined the New York Police Department where he also excelled. He climbed the police ranks, becoming a detective and serving as a special bodyguard to the Governor of New York. He successfully defended his Olympic title at the 1906 Intercalated Games in Athens where he again won the shot put gold medal.  The 1906 Games were considered official by the International Olympic Committee at the time, but today they are not officially recognized. 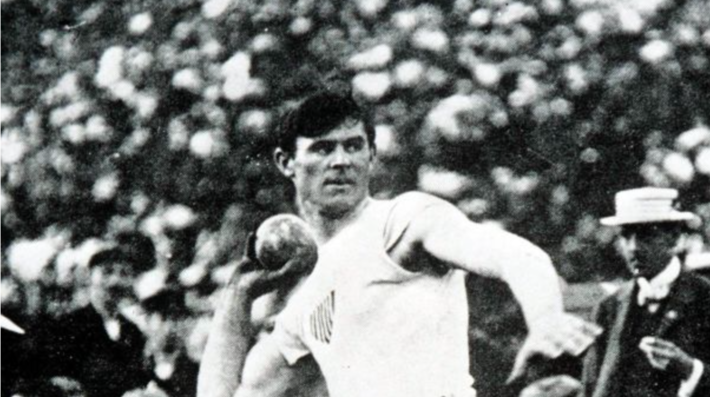 Sheridan dominated the 1908 Olympics, winning gold in the shot put, and silver in the standing long jump, standing high jump, and stone throw in Athens. He was expected to take the gold in the pentathlon, too but a leg injury prevented him from taking another medal home. Martin’s athletic achievements so impressed the king of Greece that he had a statue erected to Sheridan in Athens and presented him with a golden goblet and vaulting pole. Sheridan returned to Ireland after his Olympic success and he was mobbed everywhere he went by his Irish admirers.

Sheridan proved nearly unbeatable during a 14-year span in which he won nine Olympic medals. He retired from athletics in 1911 at the age of 30, the most accomplished athlete of his day. He won the All-around Championship of the World in track and field events in 1905, 1907 and again in 1909. He is credited with winning 12 national championships, and more than 30 American, metropolitan and regional championships. Sheridan also set an amazing 16 world records.

On Saturday, March 23, 1918, a group of his friends organized a surprise party for him to celebrate his 37th birthday, but the party never happened. Sheridan had been admitted to hospital the previous day, suffering from pneumonia. Sheridan became one of the victims of Spanish influenza that was sweeping the country.  He rallied, regressed, and rallied again. Five days later, he died on March 27th, 1918. A huge crowd attended his funeral — the men he worked with and played with wept openly on the street. Sheridan was eulogized as "one of the greatest figures that ever represented this country in international sport, as well as being one of the most popular whoever attained the championship honor. He was buried in Queens Calvary Cemetery, not far from Celtic Park, the Irish American club field where he first began his rise to athletic greatness.

My friend and one-time Newsday colleague Gerry Reagan suggested that I reach out to you.

I am doing some research for a project on my Dad, Bobby Cassidy. He was a professional fighter from 1963 to 1980, wore kelly green trunks and was always introduced as Irish Bobby Cassidy. He fought often at Madison Square Garden, as well as the old fight club, Sunnyside Garden.

While researching the boxing stuff is relatively easy, it's the other parts of his life that prove more difficult. I am trying to piece together a memory from my childhood that, unfortunately, my Dad can't help with me any longer. My Dad fought at Sunnyside Garden at different stages of his career and had a string of fights there in the mid-1970s before it closed down. It was at this time that I was old enough to go watch him fight. At that point, Sunnyside was still a very Irish neighborhood. There were plenty of bars around Sunnyside Garden, heck, there was even a bar attached to the front of the arena.

I remember as a kid, my Dad hanging out with someone who was loosely affiliated with the IRA, probably, most likely, an IRA supporter who lived in Queens ... I tried asking my Dad about this but he has no idea... I guess the place for me to start is a really wide net ... I realize this may be an impossible task ... I am looking for anyone who might remember an IRA support group, or sympathizers in the Sunnyside, Woodside area ... Or perhaps Irish bars where this might have been a topic of conversation or served as an unofficial clubhouse. My introduction to this person was 1975 or 1976. He was definitely a good 10 years older than my father. He definitely came to the fights.  At that point, my father was 31 or 32 . Which, in 1975, put this gentleman in his early or mid 40s. Very possible he's no longer alive. I distinctly remember my Dad saying, "See this guy, he's IRA." .. And the man just chuckled.

I know this may seem an impossible question to answer, but any direction of help you can give me would be greatly appreciated. Thanks very much - Bobby Cassidy Jr. ... I can be reached here or at cassboxer@yahoo.com