An Gorta Mor: The Great Hunger This year 2017, is the 170th anniversary of the ‘great Hunger’ that befell Ireland in 1847. Otherwise known as ‘an Gorta mor’ or more commonly referred to as ‘Black ‘47’ it was a seminal turning point in the long tortuous history of Ireland.With the failure of the potato crop due to a serious blight, more than half of the 8 million population either perished or left the island to seek salvation elsewhere.

By 1841, there were 8,175,000 people living in Ireland, eighty percent of whom were poverty stricken. By 1900, the population had shrunk to a little over 3 million. Most Irish landlords were Protestants, simply because the law forbade Catholics from owning land, a result of one of the many repressive policies enacted by king James 1 in the 1600's. James' ultimate goal was to eradicate Catholicism, hopefully in one generation. The 'so called' famine of 1847 would have been seen as a good way to further the policies set in place by James.

The Irish peasants, as they were called, were comprised of both Presbyterian and Catholic, and lived in desperate conditions. Living and farming as they did, on land owned by the notorious ‘Absentee Landlords,’ they had to pay rent which was collected by an agent appointed by the landlord. Many of those ‘agents’ were notoriously dis-honest and often abused their positions by charging more than the agreed amount of rent, then pocketed the difference. If a tenant could not afford to pay the rent in cash, property, including livestock and crops, would be taken in lieu.

In this, the 21st century, we, as a people have the capability of producing enough food to feed everyone on the planet and be left with a surplus. With more compassion for our fellow man, no-one would or should ever have to suffer the pangs of hunger. It is up to us to ensure that food goes to those unfortunates whenever and wherever it is needed. Compassion is the key.Hunger is the physical sensation of a desire for food, a desire for sustenance to nourish the body. If this desire is not fulfilled the body will die. It will die a slow, agonizing death. The body will become a cannibal and consume itself from within, in a desperate, futile effort to stay alive. Then it will die. 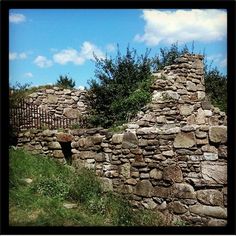 Malnutrition occurs when the body is denied the nutrients necessary to sustain life. Starvation is the state of exhaustion caused by the lack of food. Famine is the widespread scarcity of food caused by any number of events including war, extremes of weather and in Ireland’s case during the years 1844 to 1850, underhanded political machinations.

The human, in the throes of starvation, will eat anything including bark from trees, his own shoes, rats, insects and even his fellow man. In Ireland during the great Hunger of 1847 starving people foraged for nuts, berries, bird's eggs, moss and resorted to eating the grass and weeds growing at the sides of the roads. This led to the horrible practice becoming known as the “Green mouth” death. Despite the fact that many of Ireland’s major ports contained ships laden to overflowing with foodstuffs including oats, barley and livestock including cattle, sheep and pigs, all bound for Britain and other European countries, despite this, Ireland and her starving people were left to fend for themselves and to die by the roadside. 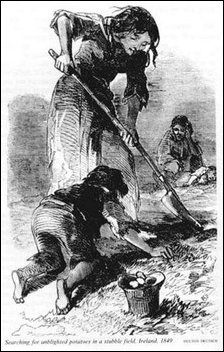 In that same year, 1847, the Cherokee and Choctaw tribes of North America, just prior to their enforced resettlement in Oklahoma, had the compassion and willingness to help the starving people in Ireland. Somehow, against all odds they managed to send food and anything else they thought would be of benefit, to save lives. Their journey became known as the Trail of Tears. On that lonesome trail, untold numbers of their people perished from hunger, starvation and disease. Let us end hunger now.

Dedicated to the memory of those lost in Ireland during the “an Gorta mor, the Great Hunger” of 1847.

From ‘The Journey: A Nomad Reflects’

By John A Brennan

The history books should be changed to reflect the reality of the genocide that took place in Ireland. One would think that we might learn from our mistakes but when we actually have enough food to keep the entire world free of hunger and we don't? The powers that be might be ashamed of themselves if they could see past their own ego's...

What goes around, comes around - eventually.

Sadly Fran we humans rarely learn from our mistakes. Slowly the true story of the genocide is being told. The BBC's series "Victoria" on PBS depicts it well and gives a good accounting I hear.

JAB: Thanks for the reminder, 2017 is indeed the 170th anniversary of Black '47 - the worst year of the Hunger itself which began in 1845.  You are closer than most with your notation that:. more than half of the 8 million population either perished or left the island to seek salvation elsewhere.  Too many conclude that it was just 1 million who starved and 1 million who emigrated based on the census alone.  A more detailed analysis is in the blog The Great Hunger - How Many Died which was posted here on The Wild Geese on Jan 20, 2015.  Thanks for the reminder, our people should never forget that horror since every one with a drop of Irish blood in them had an ancestor, whether we knew them or not, who suffered in that tragedy.

Lest we forget Mike. I think it's vital that the true history must be recounted at all times.

Let us use this nightmare to help the starving people of Yemen !!!

They are engulfed by famine in our time, now, today and for the foreseeable future.