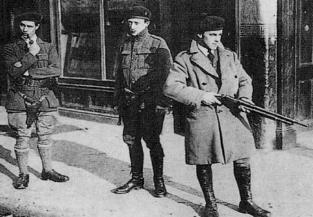 A recent post on TheWildGeese.com’s Facebook page discussed Irish revolutionary Michael Collins’ role in the event of Bloody Sunday, November 21, 1920. On that day, under Collin’s direction, “The Squad” assassinated key members of the British Intelligence apparatus. These deaths were followed by blind reprisals by the Black and Tans, Auxiliaries and Royal Irish Constabulary, all then parts of the British-established police force in Ireland.  The writer referred to this as the “First Bloody Sunday” to distinguish it from the “Bloody Sunday” of 1972 where members of the British army’s Parachute Regiment fired on protestors in the streets of Derry.   Actually the author is not correct, for it is hard to believe that a country’s history could be so tragic as to have not only two “Bloody Sundays” in one century, but, in fact, three. Ireland’s first “Bloody Sunday” occurred in Dublin on August 31, 1913. The background of the incident was this: Labor organizer James Larkin called for a strike by Dublin’s tram workers, who were members of his Irish Transport and General Workers' Union (ITGWU). An organized-labor innovator, Larkin had devised the concept of the “sympathetic strike,” where workers not directly involved in the primary labor dispute and strike would still go out in “sympathy,” thus bringing additional pressure to bear on employers. Larkin was a keen strategist, also, in this case timing his strike to occur during the Royal Dublin Society’s Dublin Horse Show, so as to maximize the strike’s impact.

However, Dublin’s employers were quick to act, developing a little ‘sympathy’ of their own, 400 of them combining to lock out any employee who was a member of the ITGWU. From there, the situation quickly deteriorated: Employers started importing replacement labor from Britain, and striking workers engaged in intimidation of these ‘scabs’ and anyone who opposed the strike.

The government, as could be expected, supported the employers and quickly arrested Larkin on charges of sedition and conspiracy. Out on bail, Larkin was advertised as the featured speaker at a rally at Sackville (now O’Connell) Street for August 31st. Authorities, working from Dublin Castle, immediately issued an order banning the meeting and Larkin’s speech. Larkin, addressing a crowd of supports at his union headquarters at Liberty Hall, promised to speak at the appointed place and time. He then proceeded to publicly burn the banning order, setting the stage for the next day’s violence. On August 31st, Sackville Street was packed with strikers and the simply curious who wanted to see if Larkin would indeed defy the order. Suddenly, on a balcony of the Imperial Hotel overlooking the street, a bearded man appeared. It was Larkin in disguise, and when he ripped the beard off and began to speak, the crowd went wild.

No doubt incensed that Larkin had made a fool of them, the Dublin Metropolitan Police quickly arrested him and charged the assembled crowd with batons. Two men were killed and hundreds were injured and taken to hospital. The violence of that day became known as “Bloody Sunday,” the first of three Irish tragedies to share that name in the 20th century.

The Dublin employers were to eventually break the strike. Larkin would soon depart for America. However, the violence of Bloody Sunday inspired one of Larkin’s colleagues to arm and organize security to protect strikers from similar violence. That man was James Connolly, and his Irish Citizen Army would march with Pearse and his volunteers to free Ireland in 1916. But that is another story. …

Neil Cosgrove, a resident of New City, N.Y., is the historian for John Cardinal D’Alton Ancient Order of Hibernians, Division 3, and has a strong interest in the Irish War of Independence.

Sadly, today there is almost a "campaign" among Anglo-Centric writers, scholars and bloggers, to reform the image of the Tan and Auxies and make them look like the friendly "Bobby" just out trying to keep the peace. They were a paramilitary army running a terrorist campaign.