One warm evening in August 1903 a large crowd gathered outside the Custom House in Dublin, Ireland. Nearby, the river Liffey, flowing slowly toward the sea, carried the sounds of the bustling city with it, on its never ending journey, as it had done for millennia. An imposing, well-dressed woman was addressing an eager crowd and held her captive audience spellbound. A young city girl out for a stroll, found herself drawn to the woman’s hypnotic voice and later, when asked why, she replied, “I was a young girl dreaming about Ireland when I first saw and heard Maud Gonne speaking by the Custom House in Dublin one evening . . . She electrified me and filled me with some of her own spirit. I had been reading about Douglas Hyde—his history and legends and Maud Gonne gathered it all up and made it real for me.” 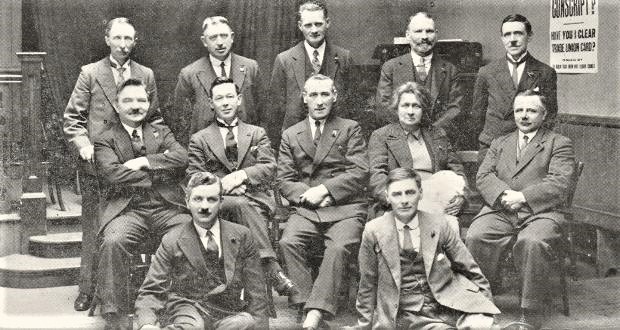 The words and ideas that the young girl absorbed on that summers evening, were, to quote her, “an epiphany,” and would have a life changing and long lasting effect. Soon after, she joined the recently formed organization named the “Daughters of Ireland” and began a lifelong commitment to the Irish Republican cause and was one of the few organizations to allow and encourage political engagement by women, who were denied the right to vote. As they were excluded from most of the other political and cultural organizations, the “Daughters of Ireland published their own newspaper. In 1908 the young girl became the editor of Bean na hÉireann (Woman of Ireland). Widely read, the newspaper, brought together a large group of nationalist minded individuals. Constance Markiewicz designed the title page, and wrote the gardening column. Sydney Gifford, using the nom de plume ‘John Brennan,’ wrote for the paper and was on its production team. Other contributors included, Eva Gore Booth, Susan Mitchell, Katherine Tynan, Patrick Pearse, Thomas MacDonagh, Roger Casement, Arthur Griffith and James Stephens. The paper included an eclectic selection of articles – fashion notes (involving Irish materials and Irish-made clothes), a labor column, cookery, politics, fiction, poetry and anything of an artistic nature. 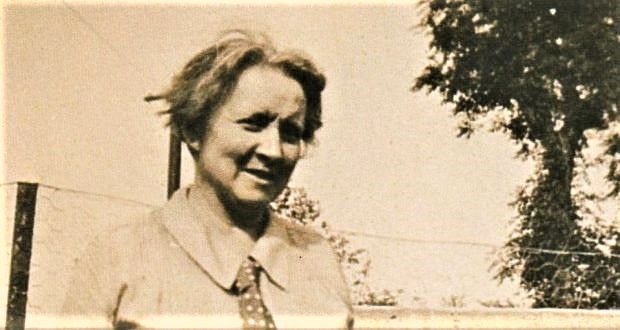 Although radical in terms of its commitment to feminism, separatism and physical force if all else failed, the nature of the newspapers activities reflected the social conservatism of the times. The organization had emerged from a campaign to organize a ‘patriotic treat’ for children who boycotted the festivities marking Queen Victoria’s 1900 visit to Ireland. Focusing its efforts on women and children, “Women of Ireland” set up Irish classes for poor children, campaigned for the extension of school meals to Ireland, alerted girls to the dangers of consorting with British soldiers, pressured shops to stock Irish goods and discouraged British army recruitment.

Helena Molony was born in 1883, at 8 Coles Lane off Henry Street in the center of Dublin. Her father, Michael Molony, and her mother Catherine McGrath, ran a grocery shop. In 1903, inspired by the pro-nationalist speech given at the Custom House by Maud Gonne, Molony became central to the school meals activism of the movement. She organized the supply of daily school meals to children in impoverished areas, and pressured Dublin Corporation and other bodies to provide proper meals (meat and vegetables, and on Fridays rice and milk) to the starved children of Dublin city. Molony also had a career as an actress, and was a member of the Abbey Theater. However her primary commitment was to her political work. She was a strong political influence, credited with bringing many into the movement, including Constance Markiewicz and Dr. Kathleen Lynn, who wrote: “We used to have long talks and she converted me to the national movement. She was a very clever and attractive girl with a tremendous power of making friends.”

As a labor activist, Molony was a close colleague of James Connolly and his secretary for a time. She was also a close friend and confidante of Countess Markiewicz. In November 1915 Connolly appointed her secretary of the Irish Women Workers' Union, in succession to Delia Larkin. This union had been formed during the strike at Jacob's Biscuit Factory that was part of the 1913 Dublin Lock-out. Molony managed the union's shirt factory in Liberty Hall, founded to give employment to the strikers put out of work and blacklisted after the strike. "Not one of them is a penny the better off for their part in either fight (the 1916 Rising, and the strike at Jacob's, where they all served") wrote Molony in her later statement to the Bureau of Military History. "In such a manner is the real aristocracy of a country born." She was friendly with the family of Thomas MacDonagh and his wife, Muriel, and was the godmother of their daughter Barbara, whose godfather was Patrick Pearse, Describing Liberty Hall, where Connolly spent much of his time, she wrote: "Connolly, after hours, would be free to meet private visitors… Pearse called many times, also Joe Plunkett and Tom MacDonagh. These men were all intimate friends of mine." In the same account, Molony describes leafletting O'Connell Street – then, on the GPO side, only frequented by British soldiers and their girlfriends. "Misses Elizabeth O'Farrell, Sighle Grennan and myself were spotted by police. We took to our heels, and were chased through Henry Street, Mary Street and right up to the Markets in Capel Street. We got away clear, as we were young and swift, and the police were hampered by long heavy overcoats. On the whole we feared more the soldiers with their clubs."

By 1911 Molony’s activism had shifted from propaganda to agitation, reflecting her belief in the power of direct action to effect change. She became the first Irish female political prisoner of her generation after smashing an illuminated portrait of George V during the monarch’s visit to Ireland. Although embarrassed by her arrest—‘no one but rowdies went to the police station’—she was appalled to discover that her bail had been paid by Anna Parnell. As Áine Ceannt noted of her brief, if historic, incarceration: “She was let out—as a matter of fact she was put out.” At a demonstration following her release, Molony was thrilled when she was rearrested for denouncing George V as a scoundrel,

“That was marvelous; I felt myself in the same company as Wolfe Tone.”

By that time, Molony felt increasingly drawn to socialism: “I knew little of Labor ideas, but I was always on the side of the underdog.” Her column, Labor Notes, had brought her to the attention of James Connolly, whose ideas increasingly influenced her outlook. “I was fumbling at the idea of a junction between labor and nationalism,” she explained. “Labor and the Nation were really one.” She was attracted by Connolly’s egalitarianism, particularly given the labor movement’s ambivalence toward women workers’ rights. “Connolly—staunch feminist that he was—was more than anxious to welcome women into the ranks on equal terms with men.” This left-wing trajectory was reinforced by her involvement in The Lockout, when she worked in Liberty Hall’s food kitchen and addressed strike meetings. An Abbey actor, she drew on her theatrical experience to outwit the police, disguising Jim Larkin as an elderly clergyman to facilitate his famous appearance on the balcony of the Imperial Hotel. The Lockout, Molony believed, “profoundly affected the whole country” producing “a sort of social and intellectual revolution.” It also contributed to a personal breakdown in health, leading her to spend 1914 convalescing in France with Maud Gonne. 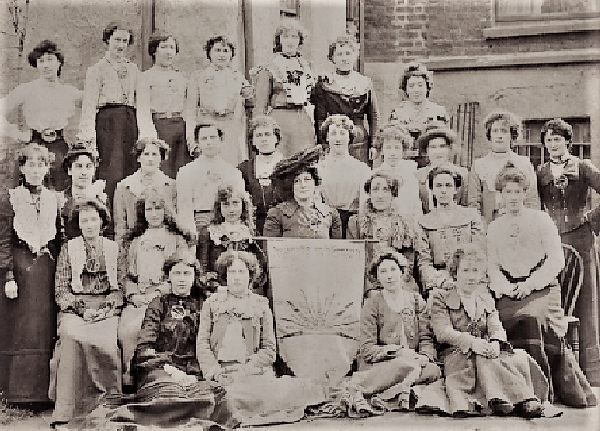 On her return to Ireland she became more involved with Connolly. She ran the workers’ co-operative store adjoining Liberty Hall, succeeded Delia Larkin as general secretary of the beleaguered Irish Women Workers’ Union (IWWU) and became proprietor of Connolly’s Workers’ Republic. She also drilled young girls as a unit of the Citizen Army. She regarded the Citizen Army as more radical than the Irish Volunteers owing to Eoin MacNeill’s reluctance to commit to insurrection, and dismissed the Fenians as ‘old maids’. She was also critical of Cumann na mBan calling it a Ladies Auxiliary, emphasizing—more than was justified—the Citizen Army’s egalitarianism, “even before the Russian army had women soldiers, the Citizen Army had them”. Her own willingness to use violence for political ends—“I always carried a revolver”—was not in doubt. The printer Christopher Brady recorded how he watched through a little door with two spy holes as Molony helped prevent a police raid on her co-op shortly before the Rising. “Connolly came down quickly, walked quietly to the counter with drawn gun in his hand. A few feet away Miss Molony was already covering the police with her automatic. Connolly looked sternly at the police and gave his command to them: “Drop these papers or I will drop you” . . . With this the police beat a hasty retreat.”

Molony eventually became a prominent member of Cumman na Ban, the Women's League, the republican women's paramilitary organization formed in April 1914 as an auxiliary of the Irish Volunteers. Members of Cumann na mBan trained alongside the men of the Volunteers in preparation for the armed rebellion against the English forces in Ireland, planned for Easter week 1916. During the Easter Rising, Molony was one of the Citizen Army soldiers who attacked Dublin Castle. During the attack her commanding officer, Seán Connolly was killed, and Molony was captured and imprisoned until December 1916. After the Irish Civil War of 1922-23, Molony became the first woman president of the Irish Trade Union Congress. She remained active in the republican cause during the 1930s, particularly with the Women's Prisoner's Defense League and the People's Rights Association.

Helena Molony retired from public life in 1946, but continued to work for women's labor rights. She died in Dublin in 1967.