There is poetry written into this land. Much like there is poetry written into the Irish soul. Poetry is not, as many think, a pretty art of whimsy and folly. Poetry, more oft than not, is the rawest and freest means of expression a person can have. I have always written poetry, but I began writing it in earnest when events in life made me more guarded. I have continued writing in all forms as a method of saying what I cannot say aloud--either because I feel unsafe, or because society does not accept poetry as a directly verbal form of communication.

There is poetry to be found in the movement of the coastal waves. How they rush in to sweep the earth off her feet and drag her down into a primal dance of life and death: minerals and erosion; tide and collapse.

The weather winks in cheeky metaphor. Every Irish person apologies for the clouds; the mist, the rain. I even met one fellow on the seashore road with his dogs who apologized for the light and said he hoped I got good photos despite it. I shall let you all be the judge of that, but I shall also tell you what I told him:

There is no bad light, simply bad angles.

It becomes a matter of perspective. John O'Donahue spoke of a nurturing land; a landscape that was (and still is) living, sacred, and eternal.

There was poetry to be found in Michael Quirke's hands; gnarled like rowan and sturdy as oak as they worked their fellow wood into shapes only he could sing into existence via lyrics of chisel and tinkling of tools. There was melody in his method of telling stories while he worked, surrounded by (again more or less in O'Donahue's words) a house that held onto echoes of things before: a heart full of memories. And Mr. Quirke is all heart. The resin that holds the old world to the new, Michael radiates with light of his own as he works patiently and meticulously in a shop filled to the brim with his love and knowledge. He is as quick with his wit as he is with his work; which seems more like a playful lesson than an actual chore. It's no wonder he calls himself "the worst butcher in the West"--if he can't trim the fat off a conversation (not that he of all people ever should): God only knows how he ever even considered trimming the fat off meat. The world is richer and healthier for having him doing [and telling] as he does.

It is a rare thing at stake (see what I did there?) to know we stood in the presence of a man so well-versed in so many arts dear to Ireland--all of which have roots in poetry. He retold stories of Oisin and the the Tuatha; of the origins of names and photographs. There were mentions of what poems the monks scrawled in their margins for good measure, and Michael even opened a wood-stained poetry book of ancient Gaelic translated by scholars--and proceeded to share with us (accompanied by a mischievous twinkle in his eye) better and more evocative interpretations:

I am Raftery the poet, full of courage and love,
my eyes without light, in calmness serene,
taking my way by the light of my heart,
feeble and tired to the end of my road:
look at me now, my face toward Balla,
performing music to empty pockets!

As I walked along the shore tonight, and thought to myself how it is the Irish shore and her people endured so much: that the beating waves of life and water could not wash from them their history or their echoes of memory. How intertwined with their landscape they are, especially the older people with their weathered faces like dune rock and their hands twisted strong by work in fields and hills.

The soul of words is here, softly grazing with the cattle. It stands tall and watchful over the ocean. It holds up the light of the sun when it peeks through the clouds. Every stream, every sigh of wind is a promise of something good to come from something bad. Another rising from the ashes and another burst of buds in the Spring. Thoughts and feelings are sparked by the rhythm of Laura Ganley's feet--she is alive with the spirit of creativity. It drives her to move even when she should be still, and her language is that of the pulsing drum and rushing flute. It is the slang she speaks when she slaps her soles and heels to cobbles and wood. It's the bright way she smiles when her dancing is mentioned, and evident that when she performs her reels and jigs, she is at her most content. 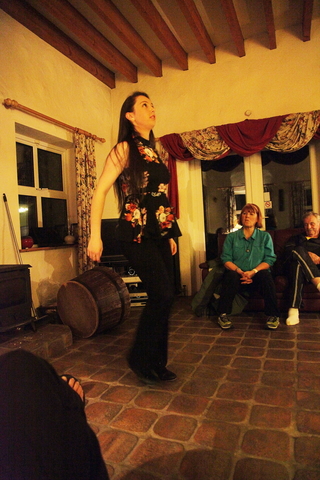 Poetry does not come from happy places so much as it creates places of not only happiness; but contemplation, and feeling. It comes more, I think, from a deep understanding of the world we live in. Sometimes that understanding is optimistic; but more oft than not, it is a reflection of our deepest frustrations. What we require, more than anything, is faith--faith we express in song. In movement. In art. It is forged as iron is; with force and heat and direction. It's carved into us as legends are etched lovingly into the surface of shining wood. Poetry leaves its marks on us, and we in turn try to give those marks a more palatable display of explanation to those who have difficulty understanding certain aspects of who we are.

Patience and respect are difficult to come by. Like the cliffs clinging to the shore; rising over the white heads of gnashing waves, we struggle to remain upright and dignified against our own private adversities. But I think that the resilience of the Irish spirit prevails against all howling gales--and so should we learn to live with our troubles. To not only accept them and decipher them, but to laugh about them; finding that one grain of humor in every barrel of tragedy as these fine people do. I'll trouble you no more with prose, but instead give you my thoughts by end of day.

I only hope my song is a window through which you see hope, and know that even though life can be difficult, there is light beyond the clouds. And there are no bad lights. Only tricky angles.

With the mortar of words
And raked clay from the moor
We've fashioned a house of memories
Thatched with living verse
Woven by worldly hands
Universal communication
in music that skims the sea
swift as swallows
Sprayed with salt
across granite faces
No corner shall I keep
wherein my secrets lie.
Rather shall I stretch my arms
and shout to the heavens,
"Here I am!" and let my voice
be lost to the roar of crowding winds,
To be lost at frothing sea,
forever echoing in valleys rich with grouse,
This is where I've built a home,
and nature shall answer,
your home is kept within. So beautifully expressed. I am in awe.

Thank you Colm. I am humbled to hear you say that.