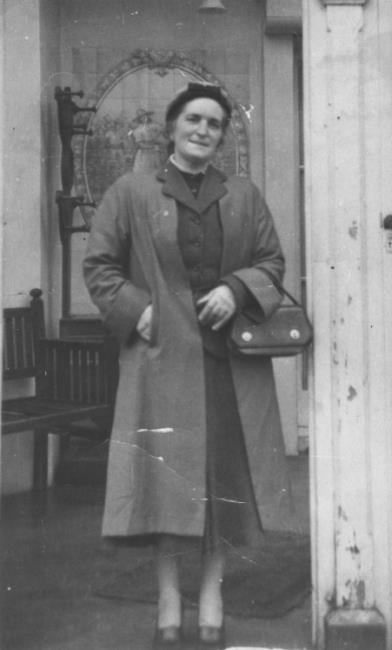 This is my late mother, Margaret McGuinness Kelly, who was an assistant to James Connolly. Her great friend Winnie Carney was her bridesmaid when she married in 1933. My mother's father and mother where founding members of the Irish Citizens Army in Belfast, and uncle Alfie McClean was the first General Secretary of the Irish Transport Workers Union in Belfast. He was also James Connolly's election agent in 1907 and 1911.

The bag she has on her arm in this photo was made for her by the Republican prisoners in Crumlin Road Jail in Belfast between 1956 and 1964. She had two sons in jail at that time -- John and Billy -- but she looked after all of the southern Republican prisoners by providing them with their fruit parcels every Saturday at her own expense as she refused to accept any funding from the Republican families. As she said, there are people out there who need that funding more than we do. When their people came to visit, they would call to our house and sometimes stay with us while they visited their sons -- especially the people from Kerry and Cork.

She was shot by a loyalist / British murder gang during the 1981 hunger strike while going to mass. She was hit four times, but she survived until 1983 when one of the bullets (which they could not remove) slipped into her pancreas. She died on the 3rd of April 1983. Due to her relationship with the Belfast Mater Hospital, the nuns requested that we lay her out in state in the hospital chapel overlooked by the nuns. It was a great honour for our family, and we will always be grateful to the Mercy Order of nuns. For me, she was a true mother of Ireland -- strong, quiet, loyal. No talk, just get on with it, and she did until the day she died.

There is a quiet strength about her in this photograph.. It speaks volumes without words..

Go raibh mile maith agat for sharing her story with us

I am thrilled to read this story, and to be reminded of all the great sacrifices made by republicans through the centuries, acting time and again, often against all odds, to restore Irish sovereignty to the people of Ireland.

She sounds like a wonderful, strong woman.  Thank you for sharing.

A wonderful eulogy to a fine woman. God bless her and the work that she did.... a candle will be lit at St. Mary's, Annapolis, in her honor

and for your family!!!

What wonderful memories you have ..... an inspiring story

Heroes like your mother deserve to be remembered, Philip. Thank you for sharing her story with us.

What a  remarkable woman