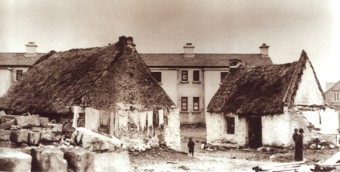 Galway City has historically been among the "most Irish" of all Irish towns/cities -- some would even argue that it would top that list.  For evidence of this, one need look no further than Galway's unofficial slogan, Croí Cultúrtha na hÉireann, which in English means, "Ireland's Cultural Heart."  Any Hibernophile knows of the rich culture preserved in Connemara to the west of the city, but the city itself has been able to retain a remarkable level of uniquely Irish culture as well.

Perhaps no area of the city was as Irish as The Claddagh, which sits just across the River Corrib from the medieval lanes of what is now known as "The Latin Quarter."  This area once sat just outside the old city walls which enclosed the city during medieval times.  At different points in the history of Galway, these native Irish living in the Claddagh (as well as other parts west) would have been prohibited or, at best, strongly discouraged from entering the walled confines of the city.  By many accounts, this was due to an admixture of snobbery among the city's elite, and a fear of the perceived wild nature of the native Irish.

Most people around the world who know the name "Claddagh" know it because of the famous ring which bears its name.  The Claddagh was a fishing village of native Irish families which featured old style thatched homes, most of which had been in the same family for many generations.  The last of these thatched homes were torn down in the 1930s following a government assessment which deemed most of the structures unsafe for human dwelling.

This was an unfortunate turn of events, for the present-day Claddagh is mostly undistinguishable from any other area of the city or its outlying communities.  In the photo above from the 1930s, you can see two of the last remaining cottages just before they were demolished, and the much more utilitarian structures which would replace them in the background.  I have often lamented the complete removal of every thatched structure as I drove or walked through The Claddagh.  One wishes there had been enough foresight by someone of influence in the 1930s to understand the value of retaining at least a handful of these old homes and bringing them back to structural soundness for future generations to experience. For generations, The Claddagh was home to an impressive fleet of fishing boats, and an impressive crew of men who manned them.  The women would take the day's catch across the river to the open-air fish market where the fish would be laid down on the cobblestones for display.  The photo to the left shows some of these Claddagh women selling the fresh fish brought in from Galway Bay.  The River Corrib runs behind them, and you can see a few of the old thatched homes of The Claddagh beyond the river.

The following fascinating account of the 19th century population of The Claddagh was published in the Ulster Journal of Archaeology in 1854:

“The people of the Claddagh are, in my opinion, purely Irish, of the most ancient Celtic type. The village at the present day is like any ordinary Irish village, and that it was a mud city when Rome was being founded, is more than probable. That the Claddagh men are not Spaniards any one might see at a glance; and it is astonishing to me how the theory of their Spanish origins could have kept ground for so long. A Spanish face may still be seen in and about Galway — once in a week or so; but it appears to me that the Claddagh, above all other people, had no intermarriage with Spaniards.

“The Christian names are generally scriptural; as John, James, Peter, Luke, Michael, Matthew, Paul, Joseph; also Patrick, William, Dominick, Austin, etc; Catherine, Mary, etc. But they have this remarkable peculiarity, that there are so many persons of the same name that they are distinguished (in the Irish language) by the names of fishes as thus, Jack the hake; Bill the cod; Joe the eel; Pat the trout; Mat the turbot, etc; or Jack the trout, Jack the salmon, Jack the whale, Jack the sprat, etc.

“So far as I can ascertain they have preserved no important traditions nor poems; their songs are the same as found in the west generally. Many have fine voices and they are celebrated as dancers. A Northern has no idea of the extraordinary activity, grace, energy and ‘bashful assurance’ that characterize a set of dancers on the earthen floor of a Claddagh hut. The men and women of the Claddagh are very fond of gay dress and bright colours. The women wear blue cloaks and red petticoats. The fishermen wear jacket, breeches, and stockings, home-made and light blue. “The men have nothing to do with the sale of fish in the market, where you see only women carrying baskets and bargaining with the customers, all in Irish, some sitting quietly, or asking with a joke or a smile, if you want to buy.

“The Claddagh men are not remarkable for their warlike spirit. They are not boxers, not fond of personal encounters….but touch one and you hurt them all. There are no braver men at sea when they go forth with the priestly benediction, and the blessed salt and ashes. They have their lucky and unlucky days. They would not commence the fishing season until a priest had pronounced a blessing on the bay. They will not put to sea if a hare appears to them, and the whole fleet has been known to return home, without dropping a line, because a boy called out that he had seen a hare. No boat goes to sea without oat-cake, salt and ashes…. they consider there is a blessing in these things. If a crow flies over the boat, and croaks as he passes, it is a good omen. When a boat comes in with fish, the boatman gives a fish to every beggar who may be there to ask… it would be most unlucky to refuse charity out of what God sent to the net. This custom has been dying out with the increase of pauperism, the opening of the poor house and railway, the many mouths that must be filled with fish in Dublin. The custom is, in my mind, proof that in old times, there could not have been anything like the present amount of beggary in the district.”

Have you visited Galway City, and specifically The Claddagh?  If so, what were your impressions?

(The image of the two Claddagh fishermen above is a stereograph taken in in the 1870s, about 20 years after the above account was published in the Ulster Journal of Archaeology.)

"The Ghost of the Galway City Museum," a poem by Kevin Dalton, member of The Wild Geese

It makes your ring so much more meaningful when you know the story of this village, and these people.

The richness of Irish history could well be the basis of a number of academic theses.

Yeeeeeeah...You'll want to skip to that 3:15 mark if you don't want to have bizarre nightmares.  Haha - What is up with that video?!

Well, I skipped ahead to the Claddagh bit right after the naked lady and all the eyeballs.  Yeah, the music is nice.

a spirit or a hoax?

Had there been a few of the thatchies preserved, can you imangine the tourists that would have drawn. Unfortunately, they had no crystal ball to see that far into the future. I, like so many, love to come upon a Thatchie still in good repair and habitable.

For many of my clients, that is their one request, to spend at least one night in a Thatchie. I had teh good fortune to come upona Thatcher as he was reparing a roof. He invited me up a ladder to learn the art. my "five minute stop" stretched for the better part of the morning but what a delightful way to spend a moning. I just wish there were young thatchers to take up the job from the elders.

Traditional Irish cottages tend to be dark inside and people prefer a little more light.There are very few Irish thatchers left. Most who do it these days are foreigners. It is difficult to get fire insurance if you have thatch and its too much hassle.Maybe if the local council offered some kind of grant it would encourage people.