Tomás Séamus Ó Cléirigh (Thomas James Clarke) was born on the 11th day of March in 1858.  He was  one of the oldest members of the 1916 Rising.  Clarke was also known as Henry Wilson, an alias he used to counteract any publicity that his own name may attract in his role as a revolutionary.  He was one of the foremost leaders of the Rising even though he does not enjoy the same historically iconic status as some of the other leaders.  Clarke was one of the Irish Republican Brotherhood members most trusted by Séan Mac Diarmada.

Both of his parents were Irish, but his father was a sergeant in the British army stationed at Hurst Castle in Milford-on-Sea Hampshire, England.  This is where Thomas Clarke was born.  While still only a young child, his father was transferred to Dungannon, County Tyrone in Ireland.  It was there tha he attended St. Patrick's National School.  He is thought to have steeped himself in the Irish culture and the history of Ireland.

With unemployment being very high in Ireland at the time, Clarke emigrated to the United States of America where he joined Clan na Gael (family of the Gaels).  This is where he met Jeremiah O’Donovan Rossa who had been exiled to the United States because of his links to Fenian movements.  Clarke, an Irish revolutionary by nature, was chosen to go to London to blow up London Bridge.  This had been planned by Jeremiah O’Donovan Rossa as part of a Fenian dynamite attack.

It was 1882 when Clarke arrived in London under the alias of Henry Wilson.  However, the dynamite attack did not go as planned.  He was betrayed by an informer and subsequently arrested in possession of explosives.  He was sentenced to 15 years in prison, and he served this time out in some of the most extremely harsh conditions in British jails, including Milbank, Chatham, and Portland.  He wrote his memoirs of this time called "Glimpses of an Irish Felon’s Prison Life" (1922).  On his release, which was called a "ticket of leave," he once again emigrated to the United States.

Clarke found employment with Clan na Gael leader John Devoy.  He was the promoted to Assistant Editor in its sister paper, Gaelic American.  Through his links with Clan na Gael,  he met his wife, Kathleen Daly.  She was the niece of the veteran Fenian John Daly.  Kathleen was the sister of Edward (Ned) Daly who would also be executed for his part in the 1916 Easter Rising.

Clarke became a citizen of the United States and purchased 60 acres of land in New York.  After he and Kathleen were married, however, they returned to Dublin where they bought a tobacconist / newsagents on Great Britain Street (now Parnell Street) and Amiens Street.  This was his way of trying to maintain a low profile as he was still on a "ticket of leave" from his time spent in British prisons.

Behind this low profile, however, he was a very influential figure in the preparation for the 1916 Easter Rising.  He, along with Belmar Hobson, Denis McCullough, and most notably Seán Mac Diarmada revitalized the Irish Republican Brotherhood.  He was elected to the IRB Supreme Council and in late 1915 co-opted to its Military Council, which was responsible for planning of the Easter Rising.  Clarke worked out the general strategy and Mac Diarmada was responsible for the details.  Clarke was also the main link with John Devoy, Joseph McGarrity, and other supporters in the United States, which was where some of the funding came from.

Clarke was given the honour of being the ﬁrst signatory of the Proclamation of the Irish Republic by virtue of his seniority and his contribution over many years.  He was stationed in the General Post Office during the Easter Rising with most of the other leaders of the Provisional Government, he opposed the surrender but was outvoted.

Clarke was soon recognized by the British military as one of the leading Commanders.  He was subsequently arrested, court martialed, and held at Kilmainham Goal pending execution.  A message he sent to his wife reads as follows:

"I and my fellow signatories believe we have struck the first successful blow for Irish freedom.  The next blow, which we have no doubt Ireland will strike, will win through.  In this belief, we die happy."

He, too, was administered too by the Capuchin Friars at this time.  He was executed alongside Patrick Pearse at dawn on the 3rd of May, 1916 in Kilmainham Gaol yard.  His body was dumped in the pit in Arbour Hill and covered in quick lime. 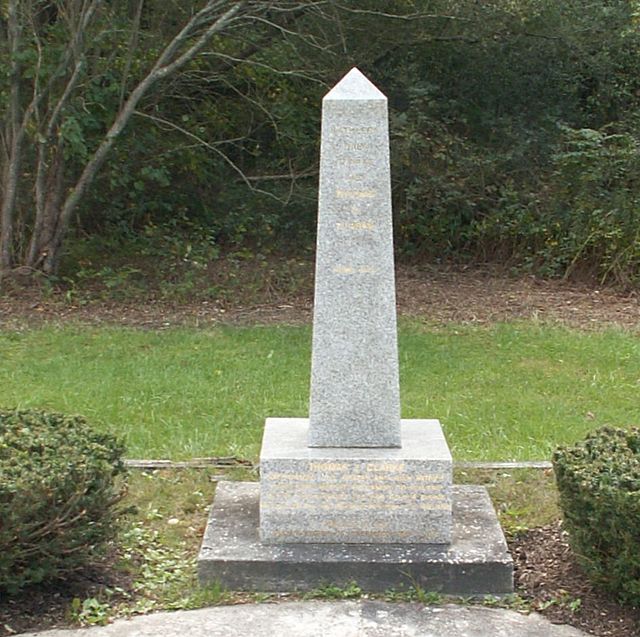 PS -- His widow, Kathleen, was elected a T.D. in the first and second Dáil notably speaking against the Anglo –Irish Treaty.  She was also a founding member of Cumann na mBan and was one of only a handful of people privy to the plans for the Easter Rising.  She was a T.D. and a Senator in both Sinn Féin and Fianna Fáil, eventually being elected as the first female Lord.