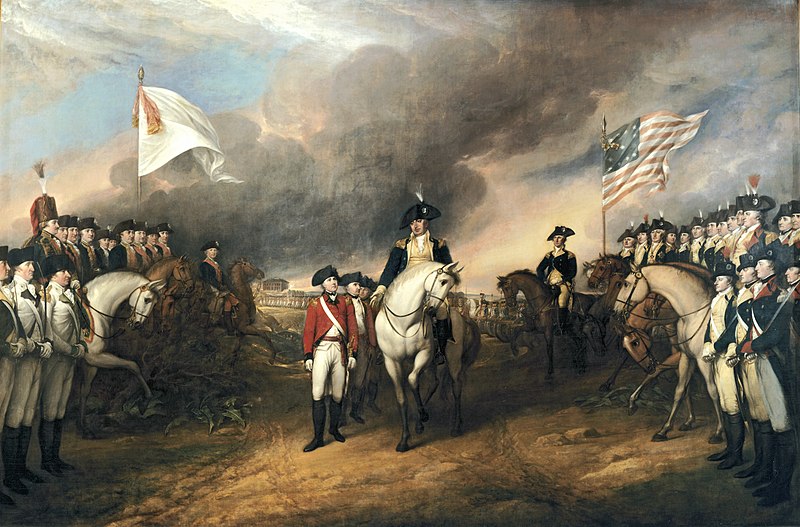 The Revolutionary War's final land engagement occurred at Yorktown, In Virginia. A battle George Washington would have avoided, except a loan from France, and French Admiral de Grasse's promise to provide naval support, along with the involvement of a French Army under Count de Rochambeau, convinced him otherwise.

The smaller but swifter English fleet with its copper hulls was engaged by the 28 ships-of-the-line under de Grasse who destroyed the British ship Terrible. When a squadron under Admiral de Barras arrived, the English fleet sailed away, leaving Lord Cornwallis and his army trapped without hope of rescue.

Cornwallis allowed the French and Americans to approach without a challenge. Even when all knew that an army on the move was at it's most vulnerable.

The siege lasted 10 days with batteries pounding the English fortifications. The return fire was less than anticipated. Not one man was killed or wounded by English gunfire. Illiness and fatigue were the enemy of the day.

American trenches, silently dug at night under the command of Baron von Steuben, slowly crept toward the embattled town.

English General Charles O'Hara needn't be told the end was drawing near. The cavalry horses were turned over to the quartermaster, meaning there'd be no charging forth. Medicine was non existent, the wounded were given a mixture of dirt and sugar.

To preserve the dwindling food supply, Negroes were driven from town at the point of a bayonet. Rather than be returned to their former masters, thousands choose to die in the no-man's land between the waring forces.

Before Cornwallis and the Welsh fusiliers could be transported across to Gloucester, a horrific gale decended, swamping the boats already in the water.

As the drummer beat out the wish for a parley, Cornwallis, claiming he was too ill to surrender, informed O'Hara that he had the duty.

Historians have wondered for centuries. Why didn't Cornwallis put up more of a fight? This historian credits that lack of effort to American General Morgan's destroying Tarelton's Army during the battle of Cowpens, South Carolina, which occurred shortly before Yorktown.

For the full story on Yorktown, read James Francis Smith's, Irish in the American Revolution, available on Kindle and published by Createspace.

Editor's Note:  The above painting, by John Trumbull, depicts the forces of British Major General Charles Cornwallis, 1st Marquess Cornwallis (1738-1805) (who was not himself present at the surrender), surrendering to French and American forces after the Siege of Yorktown (September 28 – October 19, 1781) during the American Revolutionary War. The United States government commissioned Trumbull to paint patriotic paintings, including this piece, for them in 1817, paying for the piece in 1820. (Wikimedia Commons)