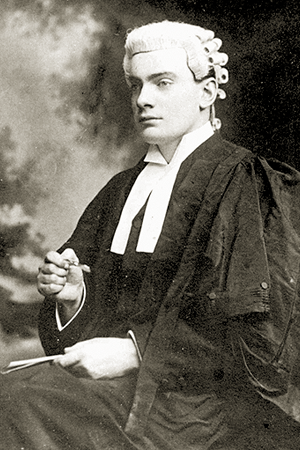 Pádraig Pearse (Patrick Henry Pearse) is one only a handful of men who have  enjoyed the dubious honour of becoming an iconic status in Irish History  books based on his role in the 1916 Easter Rising.  He was born in Great Brunswick Street in Dublin and had a  brother, Willie, and a sister ,Margaret.  His father, James, immigrated to Ireland from Birmingham in the 1850s and established a stone masonry and sculpture business.

James’ work became so popular that he was commissioned to do sculptures for churches and other and high-profile buildings.  This business flourished and it provide the family with a comfortable middle-class upbringing.  James was a Unitarian but raised his children to be free-thinkers.  James has two children from a prior marriage who, unfortunately, died in infancy.

Patrick Pearse’s mother, Margaret, was from Dublin; but her father’s family, who lived in County Meath, were fluent speakers of the Irish language.  Patrick loved listening to his  great-aunt Margaret speak in the native tongue.  Combined with her story telling in the Irish language, his mother’s influences, and the schooling he received at Christian Brothers on Westland Row, a real love for the native language was instilled in him.  Surrounded by books all his life, Pearse would eventually enter university where he would become a barrister, a poet, writer, and a Irish language school teacher.

Not surprisingly, Pearse soon became involved in the Gaelic revival (Conradh na Gaeilge).  He joined the Gaelic League at 16 years of age.  At the age of 23, he became the Editor of its newspaper An Claidheamh Soluis (The Sword of Light).

Pearse was inspired by such people as Theobald Wolfe Tone and Robert Emmet, both of whom were Protestants with a very clear vision of what a united Ireland should look like.

By 1900, Pearse had been awarded a B.A. in Modern Languages (Irish, English, and French) by the Royal College of Ireland.  He had studied at both the University College of Dublin and University College to gain these awards.  That same year, he was enrolled as a Barrister-at-Law at Kings Inns and was called to the bar in 1901.

Single-minded about education reform and the Irish language in particular, he co-founded Coláiste Éanna (for boys) and Coláiste Íde (for girls) in 1908.  Pearse was devoted to the education of Irish children through the Irish language.  Initially, he regarded educational reform as more important than political independence.  Up until 1912, he had shared a Home Rule platform with many of the Fenians and was openly committed to Irish Independence.  He became increasingly aware that while these platforms were useful in promoting  the cause for Irish Independence, it was a wasted opportunity.  He began to support the use of physical force and the necessity for a "blood sacrifice" if it became necessary (knowing only too well that this would mean outright war on British rule in Ireland).

Pearse joined the Irish Volunteers upon its foundation in 1913.  His knowledge and intelligence soon earned him rapid promotion to its headquarters staff.  He was always a good orator on all of the Home Rule platforms, so it was no surprise that he wrote and delivered the speech at the commemoration of Theobald Wolfe Tone in 1913.

Those who were secretly organizing the Easter Rising were impressed by Pearse's lifelong commitment to Home Rule and high profile in organizing and delivering speeches at all Irish-related rebel movements.  In May of 1915, he was approached and offered a role with the secret inner sanctum of the Irish army.  Subsequently, he played a very active role in the arrangements for the landing of German arms. On the 23rd of April, 1916, the Military Council appointed Pearse Commandant–General of the of the Army of Irish Republic and President of the Provisional Government.  During Easter week, Pearse served at the rebellion headquarters, the General Post Office, where he was in titular command only.  It is unlikely that he fired a single shot.  Throughout the conflict, he exuded a calm confidence.  He interpreted his role as that of offering encouragement and addressing the men to sustain morale.  He occasionally mixed with the public, most famously by reading the Proclamation on Easter Monday.  Privately, he agonised over the moral rectitude of what they had undertaken.

The onslaught of missiles and gun shots that had damaged the General Post Office was nothing compared to the fire that swept through the building.  They had no choice but to evacuate the building.  Pearse organized the evacuation.  He was the last to leave.  Deliberating overnight in makeshift accommodation, it was at noon the next day he accepted the majority view of all the leaders that they should negotiate with the British to prevent further slaughter of civilians and save the lives of the Volunteers.  At  2:30 p.m.,  he surrendered unconditionally on behalf of the Volunteers.  These orders were then made public by the Capuchin Friars who would be the "runners" between Patrick Pearse,James Connolly, and Dublin Castle.

Arrested on the spot, Pearse was taken to Richmond Barracks.  He was court martialled on the 2nd of May and transferred to Kilmainham Gaol.  He was attended to by the Capuchin friars.  He faced his death by whistling all the way to the Kilmainham yard.  He was blindfolded executed by firing squad on the 3rd of May, 1916.

While he was in Kilmainham, he wrote letters about why the Easter Rising needed to happen ... justifying the need to free Ireland from British rule.

While writing to his mother, Pearse said:

"When we are all wiped out, people will blame us.  In a few years, they will see the meaning of what we tried to do."

"This is the death I should have asked for if God had given me the choice of all deaths."

Here is a poem Pearse wrote for his mother:

I do not grudge them: Lord, I do not grudge
My two strong sons that I have seen go out
To break their strength and die, they and a few,
In bloody protest for a glorious thing,
They shall be spoken of among their people,
The generations shall remember them,
And call them blessed;
But I will speak their names to my own heart
In the long nights;
The little names that were familiar once
Round my dead hearth.
Lord, thou art hard on mothers:
We suffer in their coming and their going;
And tho' I grudge them not, I weary, weary
Of the long sorrow-And yet I have my joy:
My sons were faithful, and they fought.

Margaret Pearse (Patrick and Willie's Mother) joined Sinn Féin after the Easter Rising.  She was elected to Dáil Éireann as a Sinn Féin Teachta Dála (TD) for Dublin Council in the 1921 elections.

Isn't there a typo in this article: St. Enda's (Scoil Eanna) was the boys' school and St. Ita's was the girls' school, right?

Connaugh - you are quite right ; Thank you for pointing  has that out to me. Being dyslexic; its one thing writing a article  - and its quite another trying to edit it .

When I was working a had someone to do all my editing for me ; Now unfortunately being retired; I ahve to do my own editing ; and very often do not get it right !!