World-renowned Famine historian and Director of Ireland's Great Hunger Institute at Quinnipiac University, Professor Christine Kinealy, has weighed in on the controversy surrounding the Channel 4 commissioning of a new comedy series about the Great Hunger. What do you make of Professor Kinealy's argument? Would you agree that the Famine is "too recent, too raw and too relevant" to be funny?

Is a comedy about a tragedy in bad taste?

Hearing that Channel 4 has commissioned a comedy about the Irish Famine was not a good start to 2015.

This year marks the 170th anniversary of a mysterious potato disease, or blight, appearing in Ireland.

Six further years of potato disease followed. But what turned the inevitable subsistence crisis into a lethal famine was a series of inadequate and inappropriate relief measures introduced by the British Government — which had been the sole legislator for Ireland since 1801.

The consequence was that in the space of six years Ireland lost 25 per cent of its population, making the Great Hunger the most lethal famine in modern history.

Moreover, the population of Ireland remains smaller today than it was in 1845, making it unique among western democracies who have all experienced massive population growth. Put another way, the impact of the Famine continues to this day.

There was no neat or happy ending.

Mass emigration, both during the Famine and in subsequent decades, created Irish communities throughout the world, particularly in North America, where millions of Irish Americans regard the Famine as part of their founding story.

This is evident from the large number of memorials that have been erected there since 1995.

But while emigration may have provided an escape from starvation, many who left regarded it as exile. The early generations of migrants not only experienced extreme anti-Irish prejudice, recent research has shown that if they survived the journey, their average life expectancy was only six more years.

Again, no neat or happy ending.

For many years there was a silence in regard to the Famine. Tellingly, the first place to introduce the Famine as a part of the schools’ curriculum was New Jersey in 1994, as part of a human rights curriculum.

For Irish people, while the Famine is a significant part of their history, it can also be viewed as part of a wider history of the denial of human rights and the struggle for social justice — issues that have as much relevance in the 21st century as they had in the 1840s.

Hunger and famine exist in many parts of the world today. Viewing them through a prism of comedy is not only insulting, it is disingenuous and ideologically dangerous.

As a result of the new research on the Irish Famine that has emerged in the last 25, we have gained many fresh insights into the complexity of those tragic years.

This research has helped us to move away from simplistic narratives and crude stereotypes.

A danger of using the comedy format to tell the story of the Famine is that the characters can very easily become stage ‘Oirish’, and that the real heartbreak of the Famine be absent or marginalised.

Instead, disease, death, eviction and emigration will be viewed as funny, rather than tragic – and we might forget that they were preventable.

Where do comedic and artistic boundaries begin and end? I don’t know. But I have researched the topic of the Famine for over 30 years and I have failed to discover anything that is humorous about the slow and painful deaths of one million people, a disproportionate amount of whom were children under the age of nine.

Nor do the accounts written by the men and women who witnessed the suffering first-hand record anything other than abject horror at the scenes they were witnessing — in the words of 26-year-old Quaker, James Hack Tuke, who visited Mayo and Donegal in 1846 and again in 1847, the people were ‘living skeletons… scarcely able to crawl’.

In the space of only six years, over one million people died in Ireland. Many were buried without coffins, in mass pauper graves; others were left where they dropped dead, for fear of contagion. Just as tragically, their names and deaths were not recorded, as so they remain lost to us forever as individuals.

We only know them as a cold statistic. In death, as in life, their lives did not matter to uncaring bureaucrats in Westminster and Whitehall. Comedy is no way to honour their memory.

The Irish Famine is too recent, too raw and too relevant, to be reduced to the medium of a comedy show. Bad history and bad comedy will combine and the outcome will be bad taste. Yes, it is shameless.

Professor Christine Kinealy, whose most recent publication is Charity and the Great Hunger in Ireland. The Kindness of Strangers (Bloomsbury, 2013), is a former Irish Post award-winner who was previously a senior lecturer in history at the University of Central Lancashire. She is currently Director of Ireland's Great Hunger Institute at Quinnipiac University.

Born and raised in Liverpool, to parents from Mayo and Tipperary, Prof Kinealy earned her PhD from Dublin’s Trinity College.

Article original posted in the Irish Post on January 6, 2015.

Permalink Reply by Daniel Williams on January 14, 2015 at 2:11pm
May father described the "No Irish need apply signs as late as the latter half of the 1930's in Boston. Make no mistake about it, the Boston Brahmins did not want the Irish in Boston and that did not change until the end of WWII.

"Freedom of Speech"????  Would freedom of speech be allowed if it were a comedy about the Holocaust? Or how about a comedy about slavery in America? And while we're at it, let's make a comedy that makes fun of homosexuals.  Freedom of Speech only applies when the people being made fun of are too docile and uncontroversial to speak out against the atrocity being perpetrated against them.

Many thanks for your comments. Yes Education is very necessary not least on the use of the word "Famine" in connection to events in Ireland in 1845-48. My own history book specified by the Department of Education in Ireland at the time used the word. It is only my humble opinion that we belittle those that perished with the use of such a word. It is not about blame. It is about the truth. Thanks B. 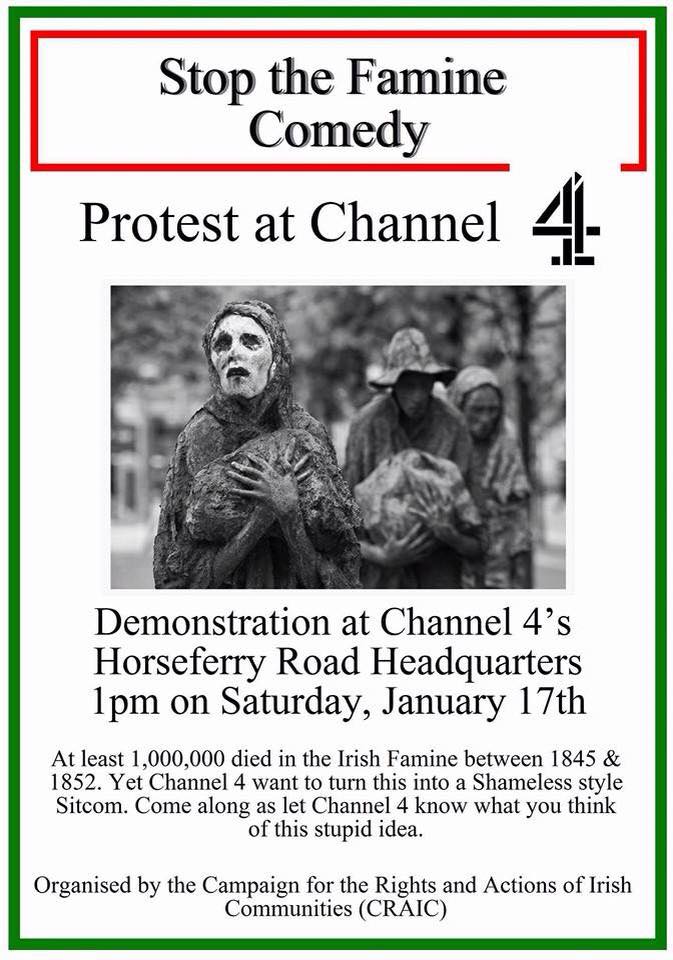 O my God, the famine happened not because the country could not provide food for its people but that another country regarded the Irish as useless peasants and just starved them.  The ships left the ports laden with food. Do I need to say more?    It can never be forgotten or forgiven.

In London in the late '50's , little "Places for Rent" notices , displayed in local shops   used to have a bottom line  "No dogs or Irish".

Absolutely true.   I saw it, I was there.

honor our history, care enough to educate yourself so you are prepared to defend it

I emigrated to England in 1960 and had more than one person spit on me and said "go home dirty Irish" some of them have been gumming their food since than.

The great shame of the British empire is they went around the world making everybody believe that they had the greatest culture and civilization, when in fact they destroyed more than they created. My father and several uncles came back from the trenches in France after fighting England's war to find jail birds (black and tans) running rampant in their country and killing our people.

Having said that I feel the need to say, the present day English people should not be blamed or discriminated against for their forefathers brutality, the same goes for other peoples of the world.

There is nothing funny about planned genocide.

At first I thought of Mel Brook's humor towards the Jewish Holocaust, but his is a different perspective.

Brooks, and others like him, most notably Monty Python, have used the Jewish Holocaust as part of their comedy and made it work. But it works because they are making fun of Adolf Hitler.

If Channel Four wants to make fun of The Great Hunger I think they should employ the formula used by Brooks and Monty Python and make fun of the people who caused the tragedy to show the world that people in power can destroy, wreak havoc and kill. Then we are laughing at the perpetrator and not the victim. But I don't think the English government has a self-deprecating sense of humor.

Permalink Reply by Dolores Rogers on February 4, 2015 at 9:21pm
I'm surprised there has not been an epic feature film made of The Great Hunger. It's a story that needs to be shared with the world. I've started the process of writing a short film on it.

Awhile back, I received a phone call from someone who was interested in creating a movie about The Great Hunger based on my children's book, The Irish Dresser. It was quite a "heady" experience, but unfortunately this kind of project often falls by the wayside. Last I knew, it was "still on the table," but that was over five years ago. And then three years ago, another film company in Chicago was interested in my adult novel, Norah, but they didn't have enough resources for this endeavor. I write historical fiction, but enjoy writing in all genres. However, writing screenplays is not my cup of tea. I've written one according to the format and after the second contact about a film, I dreamed the movie, beginning with the adult book and reflecting back to Ireland during the Great Hunger. In a crazy Muse spirit, I wrote a screenplay, The Irish Dresser, and it does include the Great Hunger. It's copyrighted and so forth, but I don't have the time to pursue interest as I am finishing two books for 2015 and continuously trying to promote the others. Nevertheless, as I've written in response to this atrocity on Channel 4 and about the Great Hunger, this event in history is always with me and will always be with me. Perhaps this site will bring people together, sans the usual muck to wade through and who you know, etc. to create such a film. My book(s) and screenplay are here and waiting!