Amateur photographer George Hackney was sent to the war from his home in Belfast in 1915, taking his camera with him.  The photo above was taken in 1916 in Belgium.  The collection contains very impressive rare images, including surrendering German troops during the Battle of the Somme.

Starting from November 26, the collection will be on display at the Ulster Museum in Belfast.  The photos were donated to the museum following Hackney's death in 1977, but have never been displayed before now.  They were recently rediscovered in the museum's archive.

See this story in The Telegraph for more photos and details.

Kelly, Thank you for posting this. I would love to visit the Ulster Museum to see the photographs. I work part-time at Midway Village Museum in Rockford, Illinois. Every spring we host a WW1 reenactment. The reenactors recreate a trench system on the grounds that looks just like that in the photograph.

What an amazing treasure trove of photographs! 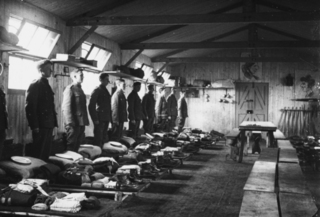 This photograph gives me insight into what the barracks must have looked like for my Great Grandfather, William Devine