Perhaps no other Irish-American served his country more daringly, yet Donovan’s largely clandestine service to America is still greatly underappreciated. Born in 1883 into poverty, the son of a Co. Cork born railroad superintendent in Buffalo, New York, Donovan combined rakish good looks with a first-rate intelligence. Rare amongst Irish-Americans of his generation, Donovan inherited his father’s allegiance to the Republican Party.

Excelling in his local Catholic school, Donovan first went to a local Catholic college before transferring to Columbia University where he starred as the football team’s quarterback. Admitted to its law school in 1905, Donovan was a classmate of his future boss, Franklin Delano Roosevelt, but the two were not friendly. Returning to Buffalo, Donovan forsook the Irish-American first ward, spending his time in posh Protestant circles and joining a prestigious Buffalo law firm.

Soon admitted as the first-ever Catholic into the Saturn Club, Buffalo’s most prestigious club, Donovan courted and married Ruth Rumsey, the attractive Protestant daughter of Buffalo’s richest man. Donovan, though, was too restless just to practice law. Eager for military service, he and his Saturn Club friends formed a National Guard cavalry troop, known as the Silk Stocking Boys, which was soon dispatched to Mexico, chasing Pancho Villa in vain across the hot and dusty Mexican landscape.

When America entered the Great War in 1917, Donovan was commissioned a major in “the Fighting 69th,” a regiment of poor Irish toughs who, despite their heroism in the Civil War, were notorious for their fist fighting and hard drinking. Donovan weeded out the troublemakers, putting his imprint on the unit by hand picking 2000 smart, athletic and agile men. Becoming infamous for his demanding physical training of the recruits, in which he also took part, Donovan once asked his exhausted men what the hell was wrong with them. One of them replied, “We are not as wild as you are Major Donovan,” and the name stuck. 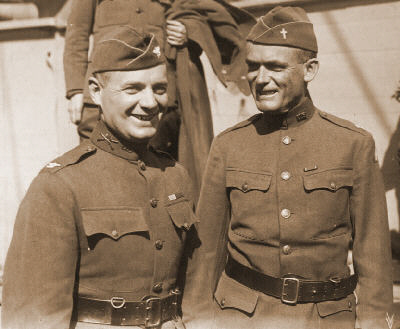 Donovan befriended the 69th’s famous, Canadian-born chaplain Father Duffy whose statue still graces New York’s Times Square. Duffy admired Donovan’s fearlessness in battle. Donovan wore his medals in battle to encourage his men, even though they made him a target for snipers. On July 27, 1918, Donovan proved his valor while leading his men across the Ourcq River. Hemmed in by machine guns on three sides, Donovan refused to cower, even though the 69th lost 600 of 1,000 men, including three-quarters of the officers. For his bravery, Donovan won the Distinguished Service Cross, the nation’s second-highest award.

Soon, Donovan again displayed his courage, fighting in the thick of battle on October 14 and famously shouting, “They can’t hit me and they won’t hit you!” Wounded the next morning, Donovan refusing to be evacuated, continued commanding his men, even after American tanks retreated from the withering German fire. Awarded the Medal of Honor, Donovan’s letters about the engagement, published by newspapers, made him a national hero. Upon being awarded the medal of honor, Donovan became the most decorated soldier in U.S. history, winning amongst other orders, the Silver Star, the Purple Heart, and several foreign awards. 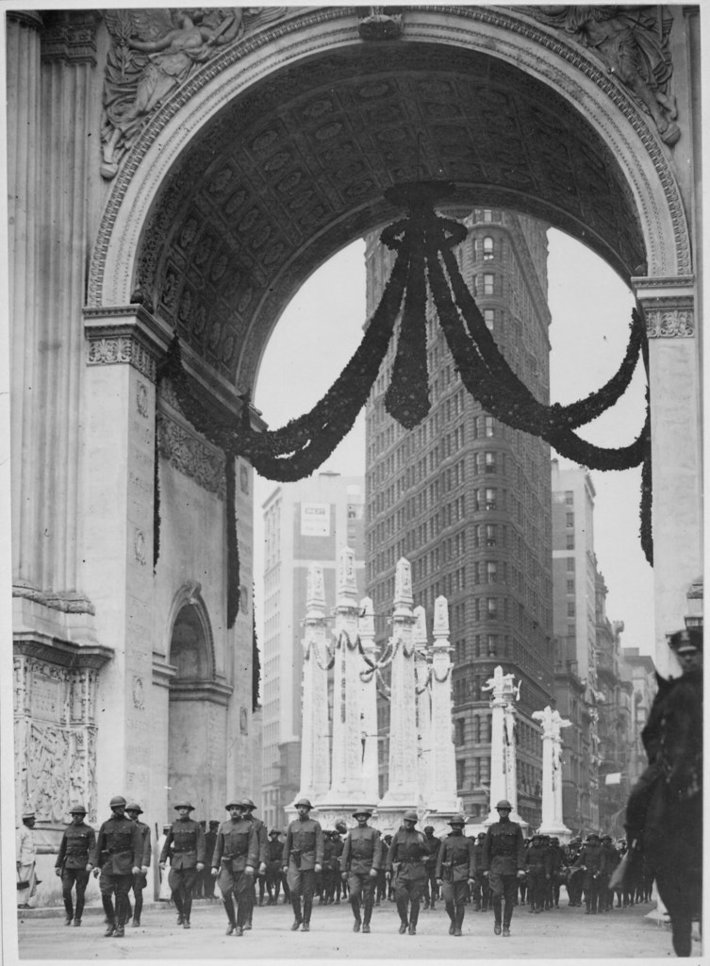 The Fighting 69th, or what was left of it, returned to a hero’s welcome and a ticker-tape parade up Fifth Avenue. Using his newly found fame, Donovan along with Teddy Roosevelt Junior started the American Legion, which quickly evolved from a group of war-veterans into the most influential American veteran group with over a million members and local posts across the country. Donovan became a hero with a national following. Returning to Buffalo to practice law, Donovan soon grew bored of private practice and won appointment as a U.S. attorney in Buffalo.

(Right: The Fighting 69th passing under the Victory Arch in New York City in 1919.)

Prohibition laws then existed, but his Saturn Club openly flouted them, nevertheless, Donovan declaring the “law is the law,” ordered a raid on the club by sledgehammer wielding federal agents. Damned by the influential club members, Donovan was effectively driven from Buffalo, much to the consternation of his wife’s WASP family. Moving first to Washington, D.C., in 1924, he became assistant attorney general at the Justice Department, but his career was blocked by anti-Catholic discrimination. Donovan then came to New York in 1929 to start his own lucrative Wall Street law firm, which made him a millionaire.

Ever restless, he ran unsuccessfully for governor of New York in 1932, surprisingly proving to be a poor stump speaker who drew resentment from many Irish voters for looking and acting like the rich Republican he was. Spending lavishly, Donovan was always on the move, shuttling between his Washington mansion, duplex on New York’s Beekman Place, summer home on Cape Cod, or his Virginia country home. His wanderlust increasingly took him to Europe and Asia where he wrote reports for clients on the investment climate. In 1939, he met Spain’s Generalissimo Franco on the front lines of the Spanish Civil War, where he observed Nazi Germany’s frightening use of its weapons and warplanes. He also visited Italy’s Mussolini who was impressed by Donovan’s war heroics. Ostensibly traveling for business, Donovan in fact gathered intelligence for a secretive private organization known as the Room, a group of international businessmen and lawyers who traded tips on the increasingly ominous European situation. Amazingly, before World War II, the U.S. government had no foreign spy agency, leaving it unprepared for the upcoming world war. In 1939, with Britain facing war, its foreign-intelligence service, M.I.6, began looking for American allies and spotted one in Donovan who, despite his Irish background, was an anglophile. In July 1940, Donovan flew to London to meet Colonel Stewart Menzies, the chief of M.I.6 and Winston Churchill whom Donovan greatly impressed. Returning to Washington as the Battle of Britain raged, the pro-British Donovan told Roosevelt Britain could survive only with America’s help.

In January 1940, Donovan sat in a radio studio plugging “The Fighting 69th,” a new Hollywood movie. The film, starring James Cagney, Pat O’Brien and George Brent as Donovan, put him back in the spotlight just when President Roosevelt needed someone with Donovan’s European experience. Roosevelt liked Donovan and trusted his intelligence, even though Donovan was a Republican. In July 1941, FDR established the Office of the Coordination of Information (COI), naming Donovan its director. After Pearl Harbor, Roosevelt again turned to Donovan, adopting Donovan’s blueprint for a secret American intelligence service based on the British model and appointing him to run the agency, called The O.S.S., the office of Strategic Services. 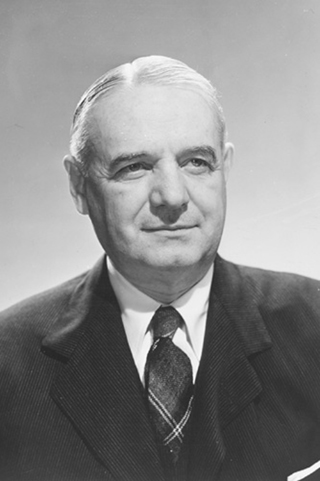 At the end of the war, America was in transition. Donovan and the American Legion pushed through Congress the G.I. Bill, the most far-reaching education program in American history, allowing millions of veterans a college education. America also knew it needed a foreign intelligence agency and Donovan hoped to be named by F.D.R’s successor Harry Truman to head the newly created Central Intelligence Agency, the CIA. A loyal Democrat, Truman, though did not share F.D.R’s high opinion of Donovan, instead naming one of Donovan’s spies, Allen Dulles, to run the CIA.

(Right: Donovan during his later years, while he was the ambassador to Thailand.)

Deeply disappointed. Donovan went to Nuremberg where he played an important role in providing evidence in the prosecution of former Nazis. For the remainder of his life, Donovan longed to run the CIA, but Eisenhower also denied him the job, but named him ambassador to Thailand where Donovan first began to show signs of the dementia that quickly grew worse. Hospitalized in 1957, Donovan suffered hallucinations, imagining the Red Army coming over the 59th Street Bridge, while often wandering onto the street in his pajamas.

In his last days, Donovan received a hospital visit from President Dwight D. Eisenhower who called Donovan “the last hero.” When Donovan died, on February 8, 1959, the CIA cabled its station chiefs around the world: “The man more responsible than any other for the existence of the Central Intelligence Agency has passed away.” Today, Donovan’s statue stands in the lobby of the CIA’s headquarters, in Langley, Virginia, a tribute to the Irish-American war hero who single-handedly created America’s foreign intelligence capability.