Organizers announced there were hundreds present at a protest near Shannon Airport as Reagan ended his visit. In fact, a small group of about 20 people gathered at the Drumgeely apartments.

When he visited the village of Ballyporeen, County Tipperary on June 3 protestors were kept at a discreet distance on the outskirts of the village. It was from that village his great-grandfather, Michael Reagan, immigrated to the United States. Records show he was baptized in the town in 1828 and lived there until his departure to the New World in the 1860s.

Ballyporeen is located on the R665 road which was once the main Dublin-Cork thoroughfare. It lies in a valley between the Galtee Mountains to the north and the Knockmealdown Mountains to the south. The Duagh River runs through the village and the nearest large towns are Mitchelstown and Cahir.

Historians will be interested in knowing Ballyporeen is located in the parish of Templetenny, barony of Iffa and Offa West, county of Tipperary, and province of Munster, 4 miles from Clogheen, on the road from Cork to Dublin. According to 1837 records there were 513 inhabitants living in 113 houses.

Reagan addressed the residents of Ballyporeen, politicians, and the world media as “Muintir na hEireann” (people of Ireland) with a proficiency that suggested be may have practiced on his way there. His efforts at mastering the Irish language earned him an enthusiastic round of applause.

“Of all the honors and gifts that have been afforded me as President, this visit is the one that I will cherish dearly,” he said. “You see, I didn't know much about my family background -- not because of a lack of interest, but because my father was orphaned before he was six years old. And now thanks to you and the efforts of good people who have dug into the history of a poor immigrant family, I know at last whence I came. And this has given my soul a new contentment. And it is a joyous feeling. It is like coming home after a long journey.”

Older members of the audience undoubtedly recalled a visit of another American president some 21 years previously. John Fitzgerald Kennedy was also visiting the home of his ancestors at Dunganstown, County Wexford.

“Looking around town today, I was struck by the similarity between Ballyporeen and the small town in Illinois where I was born, Tampico,” Reagan continued. “Of course, there's one thing you have that we didn't have in Tampico. We didn't have a Ronald Reagan Lounge in town. Well, the spirit is the same, this spirit of warmth, friendliness, and openness in Tampico and Ballyporeen, and you make me feel very much at home.”

Of course, Ron and Nancy visited the Ronald Regan Lounge (pub) where he sipped from a pint glass of Smithwicks ale while she enjoyed a liqueur. The actual interior fittings of the Ronald Reagan Lounge were moved to the Reagan Library, California in 2005. It now resides in the Air Force One Pavilion. The gift shop sells Ronald Reagan Pub Pint Glasses measuring 6 inches in height with a 16 ounce capacity.

“What unites us is our shared heritage and the common values of our two peoples,” Reagan continued. “So many Irish men and women from every walk of life played a role in creating the dream of America.”

He went on to mention Charles Thompson, Secretary of the Continental Congress, and who designed the first Great Seal of the United States.

“I'm certainly proud to be part of that great Irish American tradition,” he said to the delight of the crowd. “From the time of our revolution when Irishmen filled the ranks of the Continental Army, to the building of the railroads, to the cultural contributions of individuals like the magnificent tenor John McCormack and the athletic achievements of the great heavyweight boxing champion John L. Sullivan -- all of them are part of a great legacy.”

Michael, Ronald Reagan’s great grandfather, changed the spelling of the family name when he immigrated to America. The president joked that he had been informed professional people spelled it R-E-G-A-N and only common laborers spelled the name with the extra A. “So, meet a common laborer,” he said to laughter.

“The bond between our two countries runs deep and strong, and I'm proud to be here in recognition and celebration of our ties that bind,” Reagan concluded. “My roots in Ballyporeen, County Tipperary, are little different than millions of other Americans who find their roots in towns and counties all over the Isle of Erin. I just feel exceptionally lucky to have this chance to visit you.”

He departed Ballyporeen for Dublin leaving a warm feeling among the people. A son of Ireland who had done well had come home to visit.

Today Ballyporeen is a small village with no major industry of famous tourist attraction. Its inhabitants are either retired, farming people or commute to jobs in nearby towns. Visitors are either lost, visiting relatives or serious Regan enthusiasts.

To most people it is an insignificant place but the residents remember the day in 1984 when Ronald Regan, the President of the United States, stopped in the place his people came from.

Below: Ronald Reagan's boyhood home in Dixon, Illinois is open to the public. 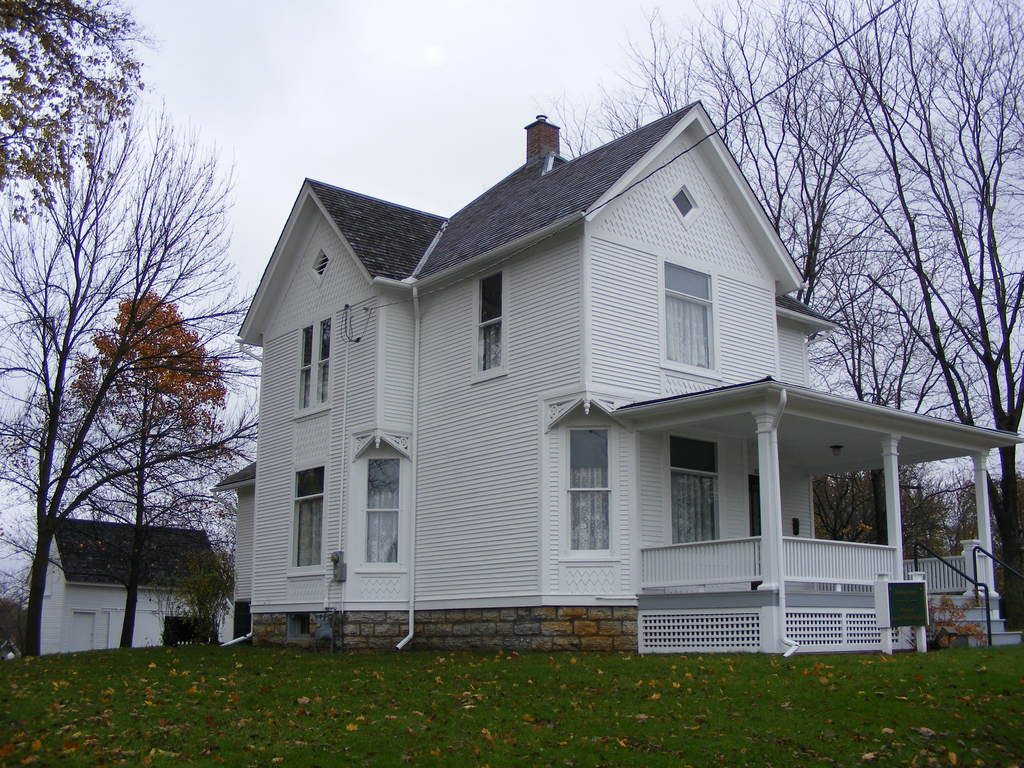