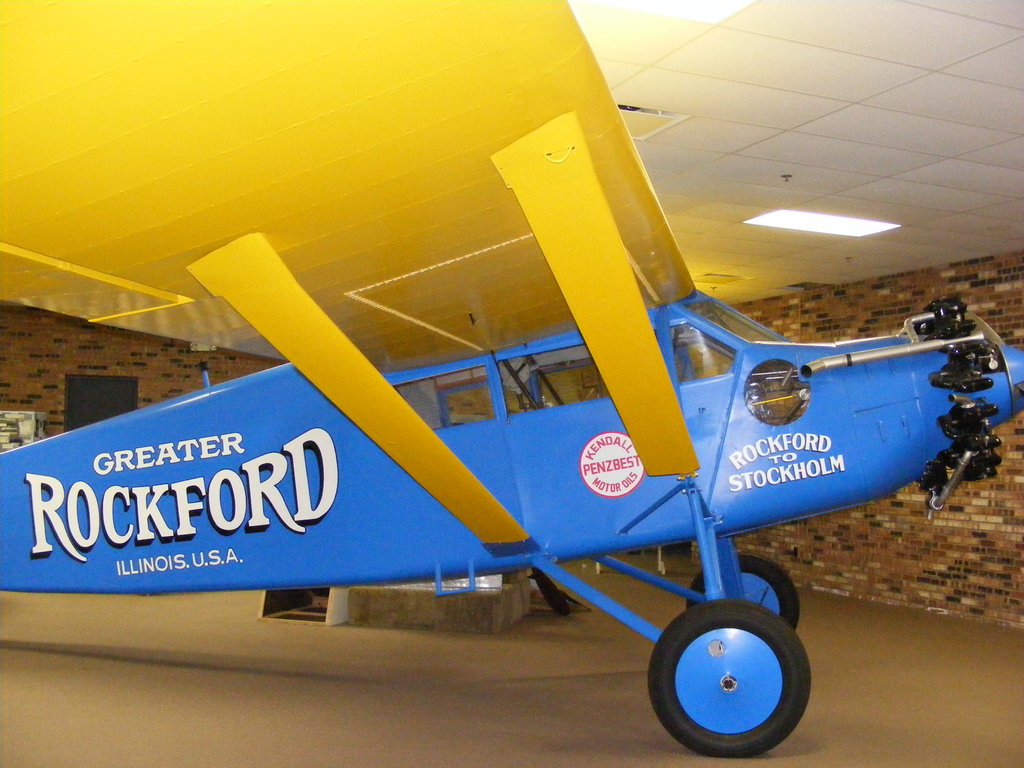 In March of 2014 I traveled from Illinois to Ireland courtesy of Aer Lingus. As I followed our progress across the Canadian Maratimes and close to Greenland I thought of Bert Hassell and Parker Cranmer.

The first group of Swedish immigrants to arrive in Rockford, Illinois in 1852 had intended settling in Chicago.

The story goes their train did not stop in Chicago because of a cholera epidemic in that city.

Bert Hassell was a Rockfordian of Swedish descent who made aviation history in 1928. Along with Parker Cramer from Indiana he attempted to fly an airplane to Europe utilizing the Great Circle Route.

Charles Lindberg had received acclaim for flying across the Atlantic nonstop the previous year. While his sea route provided adventure it was impractical for commercial flight carrying a payload of passengers and freight. Hassell and Cranmer wished to prove to a skeptical world the shorter northern route was the way to go.

The airplane used for the attempt was a Stinson-Detroiter Semi-Cantilever Monoplane. It was powered by a 200 horsepower Wright J-5 Whirlwind rotary engine. It had a wingspan of 45 feet 10 inches. The cabin could seat six people but the extra seating was removed to make room for extra gas tanks to raise the original fuel capacity to 700 gallons.

The flight route involved crossing Canada and continuing to Greenland where they intended to refuel at the University of Michigan Meteorological Base which was headed by Professor W.H. Hobbs. Unfortunately, they were forced to land on an icecap short of their intended destination when their fuel ran out.

Taking some basic food rations, and the mail they were carrying, the two adventurers set out on foot in the general direction of the expedition base. It took them 15 days to walk across the treacherous and inhospitable landscape. They arrived in good health and sat down to a welcome meal of soup and caribou steak. One of the men at Camp Lloyd was an airplane mechanic from Rockford named Elmer Etes. Hassell handed him a letter from his wife which was the first airmail delivery between the United States and Greenland.

A decision had to be made whether to return to the abandoned airplane with fuel or join the expedition who were about to return to the United States before the winter set in. They felt the plane may have been damaged by severe weather and may not be airworthy. After communicating with their financial backers they made the heartbreaking decision to leave The Greater Rockford and return home.

They were almost drowned when the boat carrying the expedition personnel and equipment sank after running aground. They eventually made their way to New York where Mayor Jimmy Walker welcomed them with a ticker-tape parade. (Do those New Yorkers love their parades or what?) In Washington, D.C., they met President Calvin Coolidge and President-elect Herbert Hoover. On their return to Rockford they were treated as heroes.

The adventure had put Bert Hassell severely in debt and he spent the next few years working at various jobs in Rockford. Parker Cramer continued with the quest to establish a commercial air route to Europe.

In 1931, after a number of northern flying adventures, Kramer piloted a pontoon-equipped airplane sponsored by newspaper publisher Robert R. McCormick from Detroit to the Shetland Islands, Scotland. While attempting to complete the final part of the trip from Shetland to Norway Kramer, and his co-pilot Oliver Paquette, fatally crashed into the sea.

The story of The Greater Rockford continued some years later.

When the United States entered World War II Bert Hassell found himself serving as commander of air bases in Labrador and Greenland with the Air Force. He had the satisfaction of seeing the Great Circle Route being used by military aircraft on their way to Europe.

While stationed at the Goose Bay Air Base in Labrador a military reconnaissance team returned one day having photographed a strange old airplane in Greenland. Hassell immediately realized they had photographed the airplane he had to abandon 16 years earlier. The Greater Rockford had suffered the ravages of the Arctic weather including having been blown upside-down.

It may have remained there to this day if it was not for the efforts of Robert Carlin, an airline pilot and a famous aviation artist. Eventually the airplane was lifted from the Greenland icecap in 1968 by a Sikosky helicopter. Among the people who assisted with the operation was Vic Hassell, Bert’s son, and Bill Cramer, Parker’s brother.

Ten years later a group of people including Bert Hassell and Elmer Etes saw the Stinson Detroiter arrive back in Rockford aboard a Curtiss C-46 cargo plane. Also there to meet it was Fred Machesney from whose airport the adventure began 41 years earlier.

The Greater Rockford was restored to how it looked when it took off from Machesney Airport. The work was carried out by the Rock Valley College Aviation students and facility, Sundstrand Corporation, William and Mike Warner of Aerocraft, Inc., Naperville, Illinois and Mary Hassell Lyons and the Hassell family.

It is on display to the public in the Aviation Gallery at Midway Museum Center, Rockford. Among the original equipment also on display is a life raft and pump, gas tanks, voltage regulator, radio, tire, fire extinguisher, wicker seat, gyroscope, personal items (toothpaste, toothbrush, etc.), and the casing from a shell fired for the rescue signal.

Most people have never heard of Bert Hassell and Parker Cranmer. That is a shame because they envisioned the route we now take when we fly to Ireland. Think of them the next time you relax on a transatlantic flight that only a few visionaries could foresee nine decades ago.

Hello Jerry, Glad you liked it. I like to tell the story because I feel Bert and Parker never received the credit they deserve.