Writer and producer, David Dinning (right) is preparing for his next trip to Northern Ireland later this month.  David is finishing up a documentary he has been working on for the past four years.  Here's what David says about it:

"It's consumed me for the past four years. I am curious to hear yours and anyone else’s opinion on ‘The Catholic’ game played by Pitt on the Catholic Committee during the 1780s up until it ended with the Fitzwilliam’s recall in 1795. Was Fitzwilliam’s appointment and ultimate recall part of the game? Was Pitt just trying to see how far he could push reform in Ireland? Or was he just buying time, and the time was right to crack down the United Irishmen, disband and breakup the Volunteers, use the evolution of the Peep of the Day Boys, into the Orange Boys, into the Orange Order to unleash the sectarianism that still plagues The North to this day. It worked then, and killed the rebellion of 1798, and led to what Pitt wanted all along to end the quest for democracy in the Age of Enlightenment, do away with the Irish Parliament, absorb Ireland, and preserve the Anglican Ascendancy, to call it the Protestant Ascendancy is misleading and an affront to history." New member Eddie Whyte earlier this week shared with us a concise history of the Belfast Celtic Football Club.  The impact of this legendary club has gone far beyond just the matches on the pitch, and will continue to do so thanks to the good work Eddie and others from the Belfast Celtic Society are doing to preserve that history.  Now living in Norway, Eddie maintains his strong connection to Ireland and Belfast Celtic from a geographical distance.  You can read Eddie's first offering about BCFC to The (New) Wild Geese community here. Philadelphia-based member Marita Krivda Poxon (left) recently attended a preview of a new documentary called Death on the Railroad.  Marita gives some great background to the documentary, and it sounds like a film well worth viewing. Many thanks to Marita and to everyone who continually keeps our community here "in the loop" regarding interesting and useful events which help promote "the history and culture of the Irish worldwide." 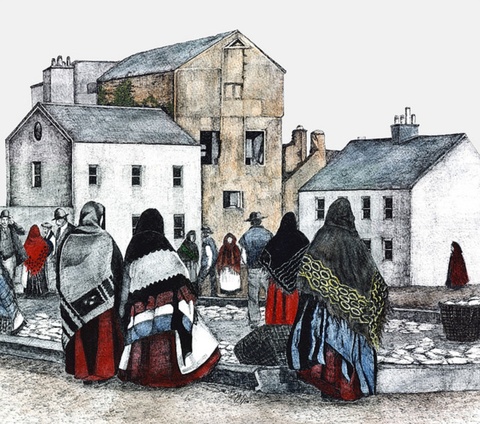 Kevin J. Dalton, a Wild Geese member from Trumbull, Connecticut, has shared with us this poem written while visiting Galway by he and his wife, Nancy.  According to Kevin, this poem was "experienced" and written while they vacationed in November 1999, coming to them after a visit to the Galway City Museum.  It was written in Jury’s Hotel (Room 106), across the Old Market Square from the Museum.  Go raibh maith agaibh for sharing this, Kevin and Nancy!  WG