Vietnam – “A Prayer for Pierre” 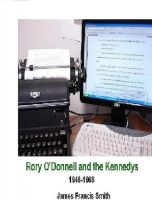 Excerpt from Rory O'Donnell and the Kennedys

For the remainder of my life, I’ll wonder about my brother Liam’s last thoughts when in 1945 his plane plunged into the Sea of Japan.  So too, will I wonder about the last thoughts of those valiant defenders of Dien Bien Phu.  To understand their frustration, we need to put ourselves in their place.  Imagine yourself as Pierre, a fictional officer—veteran paratrooper, small of frame, as Frenchmen tend to be.

The light fog lifted and the Dakota readied in position over the drop zone, deep in communist-held territory.  Pierre faced his squad of foreign legionnaires, repeating the dream of General Navarre, “We secure the borders of Laos, engaging the Vietminh on our terms, cutting their supply and communication lines, defeating them in a battle that’ll be remembered by Frenchmen for generations.”  Taking his place at the front of the line, gazing downward at the dense jungle whizzing past, Pierre swallowed to calm his anxiety.  With a silent prayer on his lips, he jumped into the void.

In my historical novels, I'm apt to include a newspaper reporter as a fictional character. The above post is from of a Philadelphia newspaper column by Rory O'Donnell. Pierre's adventures are the beginning of America replacing France in Vietnam.

A reader noticed that my book, Rory O'Donnell and the Kennedys included Vietnam, and asked me to be more specific. The book, covering the decades from 1946 to 1968, describes not only how America became involved in Vietnam but unlike most books on the topic, it goes far beyond just the politics. Fictional character BJ sailed on the USS Gordon in June 1965. BJ's happenings in Nam are based on the actual experiences of my friend Doug Keil, who served there from 1965 until 1967. Those of the medical examiner Stanley Bloustine M.D. are also based on his actual experience.