Part one of my interview with Tyrone Bowes of Irishorigines.com described how we can use our Y-DNA Chromosome test results to go back 800 to 1000 years to find the ancestor, or neighbors also part of your "clan",  first awarded our surname.  I used my cousin's Y-DNA test to help unfold the secrets in my long quest to find the origins of my Irish Ancestor Peter Martin. Peter first appeared in our records as receiving the first of many land grants during the founding of Halifax, Nova Scotia in 1749.  Rumored to be in a Regiment of Foot and of the Martyn Tribe of Galway, his origins have been illusive to the many Nova Scotia Martin descendents.  Danny Martin of Halifax submitted his Y-Chromosome DNA test results to Dr. Bowes for analysis and here is the report. 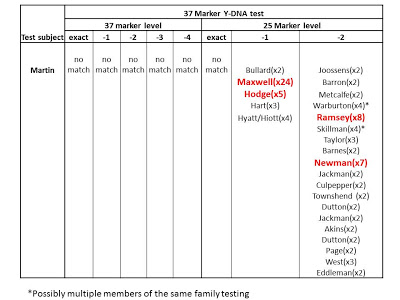 No Irish names are on this list but interestingly some famous Scottish Clans are prominent.  The following is the conversation that ensued between Dr. Bowes and Danny Martin that may help us all to understand this new technology. These revelations have expanded my perspective on genealogy and taken my proverbial Martin "brick wall" to a new exciting level. I have other brick wall Irish lines in 1700's Nova Scotia including O'NEIL/Native Irish, MAGUIRE/Native Irish, CONNORS/Native Irish, DOYLE/Viking, SCALLION/Native Irish, and JOHNSON/Norman English. - Alannah Ryane for TheWildGeese.com DR. TYRONE BOWES:  Firstly I cannot be confident in conclusively pinpointing a specific location. Having said that there is a strong link to the Maxwells and Ramsays both Scottish Clans associated with the central belt of Scotland, these are the 2 Surnames with whom you share the most matches and a genetic link to.

As for the ultimate ethnicity, there may be a clue in the fact that Maxwell, Ramsay, and Newman Surnames are Anglo-Saxon in origin. We do not usually tend to think of Anglo-Saxon's in Scotland, but the Scots are a really mixed bunch, Briton's, Picts, Celts, Anglo-Saxon's, Viking's, Welsh tribes and Normans.


The association with Newman may possibly be the areas where these Anglo Saxon's first settled. And indeed if you look at Martin, Hodge and Newman you see association with the Southeast of England where the Anglo-Saxon's first arrived. So your ancestors may have arrived as Anglo-Saxon's and migrated north to Scotland (adopting Scottish habits... Clan system etc..) and then at some stage ended up in Ireland... how they ended up in Ireland can only be guessed at presently.

Thanks for this. As I'm sure Alannah has already explained to you, there is absolutely "no" record as to where Peter Martin came from or how he arrived in Halifax in 1749. All we have is a conflicting family story of Galway or Genoa. This at least narrows it down to the British Isles. He could have come from Scotland or England for that matter.

The fact that he lived with and married Irish people and all of his offspring went on to be Catholic (in an intensely British protestant settlement) makes me believe that he probably was from Ireland...but maybe not...who knows?  How far back does the 25 marker go? Is it unusual not to have any 37 marker matches?(except for an Italian with a possible Paddy in the woodpile :) I know Strongbow had Anglo-Saxons in his force. Perhaps our ancestor came over with him and ended up getting mixed up with the Norman Martins?

Is it worth paying for 67 marker? I figured that if there was only one match at 37 there would only be the same or none at 67.

Since its DNA and we all have individual mutation rates it will be difficult to put a time frame to matches. At present I put a time frame as between 800-1000AD for Ireland as this is the time when Surnames became common, so if my Surname matches all lead to a certain area it will be in that time frame that a founding ancestor lived.

There is a lot of cross-over with Scotland and Ireland, the Bruce invasion of Ireland, Gallowglass mercenaries settling here from Scotland and then later plantations! If you look at the Bell Case study on the website, his recent ancestry is Catholic Irish, but his DNA matches point to lowlander protestant Scots from Dumfriesshire this may be most relevant to your own ancestry.

I completely overlooked Bruce's Ireland campaign. That could possibly be the scenario. I've been reading about the Maxwell and Ramsay clans and they were both allied with and supporters of Robert the Bruce. Ramsays apparently did accompany Edward Bruce in his invasion of Ireland and most likely included Maxwells as well. Seeing as our family's connection, dna-wise, is quite distant I'm assuming it's been a number of centuries since our ancestor lived in the Maxwell/Ramsay lands otherwise there would be closer matches. Bruce's campaign was in 1315 so it could be in the ballpark. This is making Peter Martin being from Ireland quite plausible. Also from what I've been reading about the Maxwell and Ramsay clans is that they were actually of Norman extraction (this is from internet research so it could be pure fantasy) which is interesting as well considering the Martin-Norman connection.  Anyway, what do you think?
Danny

Yes its certainly possible. What I am going to attempt over the next few years is to get Irish people living in Ireland with strong links to the land (farmers) to undergo Y-DNA testing, this will really help solve these puzzles. If your ancestors were Galway Martin's then testing some of these should establish the link as they should match you at the 37 Marker level. As far as I am aware the Norman's were invited into Scotland and yes Maxwell and Ramsay Clans could be of Norman extraction, if I remember correctly the lowlander Clan Bell is also of possibly Norman extraction. You may want to contact the 'Maxwell' Clan association as they would have a rich source of information.

A few more questions regarding timelines and such. In the below e-mail you put the time frame as between 800-1000AD for a founding ancestor.  Seeing as the Maxwell and Ramsay clans didn't make their way into Scotland until sometime in the 1100's (having arrived in England during the Norman invasion of 1066) perhaps the connection goes back before Scotland or even before the Norman Invasion of England.  On Mar 1, 2012, at 9:55 AM, Tyrone Bowes Ph.D. wrote:
Here's a few significant Norman dates:
911 AD : Rollo "the Viking" attacks Paris and lays siege to Chartres, Is granted the land in Normandy...sort of like a ransom -Duchy of Normandy is established
1066 AD: William the Conqueror invades England. Normans become the ruling class
1169 AD: Cambro-Norman invasion of Ireland, Richard de Clare (Strongbow)
"approximately at this time the Maxwells and Ramsays were moving into Scotland"
1315 AD: The Bruce invasion of Ireland
Looking at these dates the common ancestor to the Maxwells, Ramsays and Martins could have been in Normandy (or Scandinavia for that matter) not necessarily In Scotland.Our guy could have arrived in Ireland with Strongbow. Be very curious to see if there any matches with confirmed  Galway Martins in the  37 marker department.  What are your thoughts on this Tyrone?

At the 25 marker level it may well be an association (shared ancestor) that pre-dates the common usage of Surnames (before 1066 in the UK)
Did you join the Maxwell group? I think you should, too many Maxwell's to be a coincidence.
Regards, Tyrone

Alannah Ryane:   I love this perspective on my genealogy as it created a visual for me of an unfolding living history, as our ancestors mingled and migrated, that working with genealogical records did not really provide.  By stopping at the brick wall I missed out on possible scenarios that dramatize what really could have unfolded far beyond the brick wall.  I feel what Dr. Bowes is providing here is very exciting and is rapidly expanding and adding another dimension to the study of genealogy or as he says on his site "putting the gene back into genealogy!"

I contacted the Maxwell Clan US and got them in touch with Dr. Bowes who responded with:

I have just completed the Scottish Origeneswebsite. Its a much smaller affair than the Irish Origenes but works on the same principle 'that one's Surname matches reflect one's ancestor's neighbours at the time when one's ancestor took his Surname.'  Since theClan territories of medieval Scotland are well documented a 'GeneticHomeland' as it were can be readily pinpointed.

The Martin DNA test results did show a link to the Maxwells (and Ramsay's) but their medieval territories, although in the Scottish Central belt, are relatively far
apart. The relationship may have preceded the use of Surnames.

I informed Adrian Martyn, author and historian of the Martyn tribe of Galway of our findings and he and Dr Bowes went out for a pint (Danny and I so wish we had been with them for that conversation) and compared notes as to the Martyn tribe's origins.  Adrian is now upgrading his Y-DNA test to the 37 marker so we will now have some solid evidence to compare with our case study and IrishOrigenes.com will have the Galway Martyn tribe results in the database.  Here is Adrian listing his Galway Martyn tribe lineage:

I wish to thank Dr. Tyrone Bowes PhD, Adrian Martyn, Dr. Donald P. Maxwell, Jr., M.D and my wonderful cousin Danny Martin for responding to my requests to be a part of this project, opening up my emails has been very exciting these last couple of weeks!
ALANNAH RYANE - Media Manager for TheWildGeese.com