One of the closest times that the Irish ever came to independence from the Crown happened when Irish Catholics and Protestants united in a brotherhood of purpose for the benefit of all.  It was inspired by the American Revolution and the brotherhood was called The United Irishmen.

The 1777 surrender of General Burgoyne at Saratoga in the American Revolution was followed by the alliance of France to America's cause.  The British Parliament began to fear an invasion of either England or Ireland.  In April 1778, John Paul Jones crossed the Atlantic, captured two British ships, then boldly sailed into Belfast Bay in broad daylight and sank a British Man-0-War.  England was painfully aware that their power in Ireland to repel such attacks was minimal, so they accepted a suggestion made by Henry Grattan’s Patriot Party in the Irish Parliament to create of a corps of volunteers to defend England's Irish colony.

The Patriot Party had evolved in the Irish Parliament as a result of the Crown’s policies against dissenters.  Church of Ireland members held all the privileged positions, and the predominantly Catholic native Irish were forced to the low end of the economic scale, but all other Protestants, including Methodists, Presbyterians, Baptists, and Quakers who made up the growing middle class of professionals and tradesmen, were called Dissenters, and were likewise disenfranchised.  As Turlough Faolain revealed in his book, Blood on the Harp, ‘although the Penal Laws had been specifically targeted at Papists, much of the legislation had been drafted in such a way to make Dissenters subject to the same restrictions’.  Throughout the 18th century, selfish exploitation incited violence in all corners of England’s colonial empire.  In Ireland, angry Catholic tenants formed secret agrarian societies like the Whiteboys and Defenders to punish the abuses of the Landlords.  Dissenters followed with secret Protestant societies of their own like the Steel Boys in reaction to Ascendancy outrages.  In 1759, Henry Flood, a leader of Irish Protestants in opposition to England’s economic exploitation, was elected to the Irish Parliament and he formed a faction called the Patriot Party attracting Dissenters seeking change.  England bought off Flood with the position of Vice Treasurer and Henry Grattan stepped in to assume the vacated leadership.  The Patriot Party soon became the opposition party in the Irish Parliament that it had been designed to be. 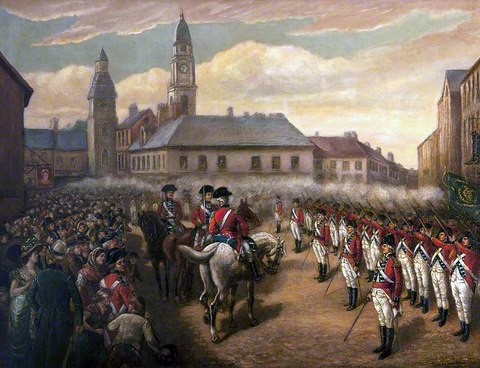 Within two years after the approval to form a Corps of Volunteers, 100,000 men were armed by the loyal aristocracy.  Catholics were initially excluded from the volunteers, but when Spain entered the American alliance in 1779, Catholics were not only invited in, but armed.  The Volunteers did not turn out to be the loyal army that the Crown had hoped for.  Not only had the Catholics no love of the Crown, but the Presbyterians had grievance with England over unfair trade laws that favored British products and crippled the Irish woolen and linen trades.

(Right: Local volunteers in Market Square, Lisburn, celebrating the resolutions of the Volunteer Convention at Dungannon, 1782.)

Thus when the Volunteers came to strength, the first invasion they repelled was the invasion of British-manufactured goods.  In 1779 Henry Gratten moved in Parliament for Free Trade for Ireland.  Knowing that his supporters were in the minority, on the day of the vote he posted  the Volunteer Artillery Corps under Napper Tandy where they could be seen from the windows of Parliament.  In their emerald and scarlet uniforms, they were mustered on College Green with their cannon trained on the assembly!  The Free Trade Bill passed and the embargo was lifted on Irish exports.  England became more nervous as Ireland became bolder.

In 1780, Gratten moved a Declaration of Right to grant the Irish Parliament independent status under the Crown, but the measure was opposed.  In October 1781, Cornwallis surrendered at Yorktown!  Afraid that Ireland would erupt next, King George gave Gratten his Irish Parliament, although it was a shallow victory.  Only 64 of the 300 seats were filled by elections; the remainder were peers, lords and landlords who were hopelessly corrupt.  There was one however, who entered and challenged that corrupt body; his name was Theobold Wolfe Tone.

Inspired by the American and French revolutions, Tone worked to unite the Irish people.  In September 1791, he published a pamphlet An Argument on Behalf of the Catholics of Ireland by a Northern Whig explaining that both Dissenters and Catholics had common cause and a common enemy – England!  The pamphlet was so well received that he was invited by Henry Joy McCracken (left) to meet with the Northern Whig Club in Belfast.  On October 12 Tone met with Thomas Russell and William Sinclair and on the 14th they all met with Samuel Neilson.  These men were members of a Secret Committee who met to discuss plans for organized political and economic opposition to England.  From that meeting sprang an organization known as The United Irishmen which held its first public meeting on October 18.  They began to lobby for Catholic rights.  England, on the verge of war with France, acquiesced, and the Franchise of 1793 was passed granting limited rights to Catholics.

Though legally established, England was determined to break this new organization and began to sow seeds of division.  Religious propaganda was aimed at both sides – each denouncing the other and in 1795, as a final solution, The Orange Order was formed among loyal Church of Ireland Protestants to exterminate Catholic `troublemakers'. Homes were raided, murders committed, and farms burned to the ground.  The leaders of The United Irishmen remodeled their organization from a political to a military one and began expanding.  In November 1796 Art O’Connor and Lord Edward Fitzgerald joined the leadership and in January 1797 Dr. J McNevin and Thomas Addis Emmet joined as well.

As Tone traveled to America and France for aid, Insurrection and Indemnity Acts were passed by Parliament and England's war against The United Irishmen accelerated.  Atrocities were commonplace and leaders of the organization were arrested.  Tone secured French aid and led a fleet of 43 French ships to Ireland.  A fierce storm prevented their landing and they returned to France with the broken-hearted Wolfe Tone who immediately began lobbying for the French to mount yet another expedition.

On March 30, 1798, England declared Martial Law in Ireland to break The United Irishmen or force them into premature action.  By May 27, the tactic succeeded.  The people were finally goaded into action in a disjointed rather than coordinated insurrection – the rising of 1798 had begun.  The leaderless and unarmed people of Wexford followed, initially led by a simple parish priest named Father John Murphy.  News of the rising reached Tone in France, and he frantically pressed the French to aid his people who were already in the field against overwhelming odds.  A small force of 1,000 men was dispatched, to be followed by a larger force.  They landed on August 22, but at the wrong place – Killala Bay in Mayo.  England dispatched General Cornwallis (recently disgraced by his surrender in America to an army made up of many Irish) to redeem his honor in Ireland.  He landed at the head of a massive army and overpowered the French and Irish forces.  French prisoners were expatriated back to France while the Irish were put to the sword.

(Below: The French and British fleets in battle off Lough Swilly.) 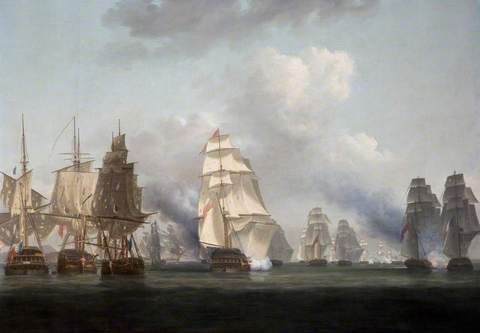 Tone arrived with the final French force off Lough Swilly and ran directly into a waiting British fleet.  After a desperate 6-hour battle, the French fleet was routed and Tone was captured.  After his court-martial on November 10, he said, I have sacrificed all in life; I have courted poverty; I left a beloved wife unprotected and children whom I adore fatherless. After such sacrifice in the cause of justice and freedom, it is no great effort to add the sacrifice of my life.   Wolfe Tone made that sacrifice on November 19, 1798. He was buried in Bodenstown, in the grave which Ireland cherishes today as her most precious possession.  Thus ended a glorious dream that had started 222 years ago in October, 1791.

Perhaps if we had an ally other than the French in that moment, we might have had better success in our efforts. Two-hundred-twenty-two years later, there are those of us still fighting for a United Ireland.

An excellent article.  So few non-Irish in America know a thing about the United Irishmen, much less realize how much that movement had in common with our own "founding fathers."