Two Hundred and ten years ago on August 25, 1803, a tragic event befell Irish history. It all began when the United Irishmen, a group of Catholics and Protestants united to work for Ireland's independence, rose for that freedom in 1798. The English put down the rising with extreme brutality and instituted a campaign of frightfulness, as Seamus MacManus called it, to break the spirit of the Irish that they should never dare to dream of liberty again. They even banned the color green which was a symbol of the United Irishmen’s union of Protestant Orange and Catholic Blue and they annexed Ireland to England in the Act of Union in 1801, so that the Irish would no longer even have a country to fight for. Terrible atrocities were reported as English militia ran down all who had belonged to, or had sympathies with, the United Irishmen. In desperation, one young man emerged, contacted the leaders still at large and planned to fight back in another strike for freedom. Entering into alliance with the Napoleon’s minister Tallyrand, he planned for another rising in 1803.

With promises of French support, cooperation of other revolutionary societies and money from men of high standing, the effort seemed more likely to succeed than the ill-fated attempt of five years earlier. Further, he now had a secret weapon, not available in 1798, that he felt would make all the difference. The weapon, developed with the assistance of his nationalist-thinking chemistry teacher, was quite simply a fireworks rocket capable of delivering a bomb. Their chemical powder mix and a stabilizing shaft made it steadier in flight than anything that had been seen before. The pair had built and stockpiled enough of the weapons to give them a military edge. The young man conferred with the French in the fall of 1802 and returned to coordinate plans in Ireland. His name was Robert Emmet.

Born on March 4, 1778, he was the 17th and final child of Dr. Robert Emmet and his wife Elizabeth. He was the fifth to bear the name of Robert since four previous attempts to carry on the father’s name had died in infancy1. A Chemistry student at Trinity College before the '98 rising, he had been expelled for refusing to take an oath of allegiance to King George. His older brother, Thomas Addis Emmet, was one of the '98 leaders, jailed and exiled by the English, who subsequently settled in America. Young Emmet was to organize volunteer cooperation with the French when they landed. He contacted surviving fighters of '98, and was told that 19 counties stood ready. He then confined his activities to Dublin with three other leaders. Alas, today we know that one was a Castle spy who relayed the plans to the English. Emmet received a report that Tallyrand was only using Ireland for his own political ends and began to doubt French support. On July 16, an explosion in an apartment he was using as an arms depot, destroyed most of his rockets. Convinced his plans were near discovery; he moved the date of the rising up to July 23. Assurances came that if Dublin rose, the rest of Ireland would speedily follow.

On July 23, as Emmet awaited his men at an assembly point, word reached him that soldiers were on their way. Confident that the rest of Ireland would follow his lead, Emmet drew his sword and led a ragged army of little more than 100 men into the Saturday night streets of Dublin. Contradicting orders (authored by the Castle spy) left the revolution that Emmet had planned little more than a street riot that cost 30 lives. Emmet went on the run into the Wicklow Mountains, where he would be safe from Crown forces, under an alias of Drake, as arrangements were being made for his passage to France. Meanwhile, English Major Sirr, sought Emmet with a vengeance. He arrested Emmet's young housekeeper, Anne Devlin who, though brutally tortured in Kilmainham Jail, never revealed his whereabouts. Her story is most inspiring and she remains one of Ireland’s greatest heroines. Emmet daringly came down from the hills to visit his dying mother and his sweetheart, Sarah Curran. Sirr was waiting and on Aug 25, 1813, (200 years ago), Emmet was captured, and cast into prison. At his trial, Emmet secured his place in Irish history with a stirring and defiant speech denouncing the oppressors of his land, and denouncing those who would not vindicate him for doing what he felt every true patriot should do. He said that since no man spoke up to vindicate his actions it was obvious that no man understood his reasons. Therefore, he asked, until my country takes its place among the free nations of the world, let no man write my epitaph. On September 20, the 25-year old rebel was taken to Thomas Street where he was hanged, drawn, and quartered. It was a horrible death, and it endeared the spirit of Robert Emmet to the Irish. They took to wearing a leaf, a plant, or a sprig of shamrock in their lapel or hat band in defiance of the government’s ban on green and to show support for Emmet’s ideals. And the poets wrote of him with passion. Even though such sentiments were censored, they simply used an old Irish trick and referred to Ireland by one of her many metaphors. When it was illegal to write in praise of Ireland, her poets wrote in praise of Dark Rosaleen, Kathleen ni Houlihan, or Nell Flaherty – all understood to be Ireland. Now a metaphor was used again to damn the British without them being any the wiser. A verse was written, which became a popular song denouncing the murder of Nell Flaherty’s Drake – a reference to Emmet’s alias. The Brits thought it a silly ditty about a woman who lost a barnyard fowl while the Irish knew they were singing about the King when they sang:

May his pipe never smoke, may his teapot be broke, and to add to the toil may his kettle not boil,
May he lay in the bed 'till the moment he's dead. May he always be fed on spoiled food and fish oil,
May he swell with the gout, may his grinders fall out, may he roar, bawl and shout, with a horrid toothache.
May his temples wear horns, and his toes all grow corns, the monster that murdered Nell Flaherty's drake.

It goes on for many more similar verses and other ballads continued to be written up to the 1916 Rising when Tom Maguire, IRA Commandant in Co Fermanagh, wrote the moving ballad, Bold Robert Emmet - the Darling of Erin. The great Irish musicologist Josephine Patricia Smith, believed that there were more songs about Robert Emmet than any other Irish hero. Author Terry Folan said it best when he wrote 'His speech from the dock is the center of Republican sentiment to this day. Poets often make indifferent generals, but, at least in Ireland, they make wonderfully articulate rebels.' 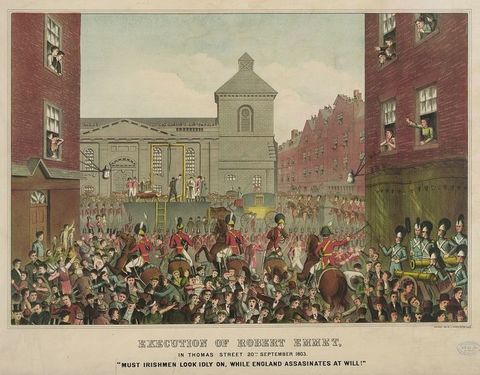 An interesting addendum to this story is that the Brits seized the remaining iron-cased gunpowder rockets in Emmet’s apartment and sent them to the Royal Arsenal where Sir William Congreve was the Comptroller. He gave them to his son, William Jr, who worked on them and subsequently claimed Emmet's innovations as his own. Junior first demonstrated a solid fuel rocket, 40.5 inches long, with a stabilizing stick 16 feet long and a range of 2,000 yards, at the Royal Arsenal in 1805 (just two years later). It was that Congreve Rocket, as it was now called, that produced the ‘rockets' red glare’ in America’s national anthem when they were fired on Fort McHenry during the War of 1812. The saddest part of the whole affair is that many books and articles like the History of Rockets by Mary Bellis have taken research from the Notes and Records of the Royal Society, and the Encyclopedia Britannica which claim that an English chemist named William Congreve invented the modern rocket as a weapon with a significant advance on earlier black-powder versions.2 Not only does the Bold Robert Emmet get no credit, he is still waiting for his epitaph to be written!

Equally interesting is the Emmet legacy in America. Robert’s brother, Thomas Addis Emmet, the exiled leader of the United Irishmen, had come to America where he became a remarkable American legal mind. He was described by historian Arthur Schlesinger Jr. as the most respected Irish American of his generation. Ironically, he was serving as the Attorney General of New York State when his brother’s rockets were falling on Fort McHenry. Thomas left a legacy of remarkable family members as well, from Medal of Honor recipient Robert Temple Emmet to Sister Brigid who was the 9th child in a family of 9 born on the 9th day of the 9th month of the 9th year of the 20th century (she was 90 in 1999). While other descendants left their marks as prominent lawyers, doctors and artists, none left their mark as visibly as architect Devereaux Emmet, great, great grandson of Thomas, who designed Long Island’s Garden City Golf Course, the Red Course at Eisenhower Park, the Green course at Bethpage, and the courses at the Huntington, Glen Head, Rockville, Seawane, St. George’s, Wheatley Hills and Port Jefferson Country Clubs.

His story and place in Irish History has always fascinated me. While on a tour of Dublin, we passed the spot where he was executed and I was visibly in awe of such a brave man. His words at the trial are inspiring and will stand the test of time.

on one of my visits, joe creedon of inchigeelagh took me to macroom for an evening service commemorating emmet. i believe it was the anniversary of his death. i was awed by the pomp and circumstance. robes, uniforms, trumpets, banners, lances, and speeches, all in an aura of reverence. i think it was in a prod church which i remember puzzled me. perhaps it was lack of space in others. i felt honored to be invited. emmet was a hero to my da.

A fascinating post, detailing the unswerving loyalty and courage of a 25 year old man, just a lad really, who made the supreme sacrifice for his beliefs. Two phrases resonate with me: the concept of the United Irishmen; and Robert Emmet's request at his trial ". . . until my country takes its place among the free nations of the world, let no man write my epitaph." If only . . .