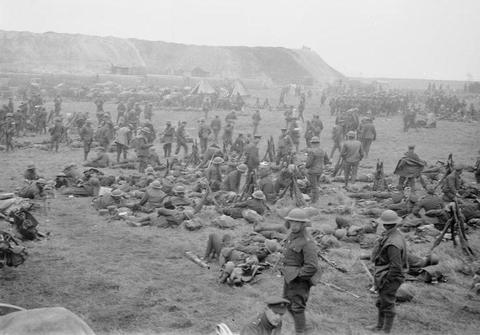 At dawn the ridge emerges massed and dun
In the wild purple of the glow'ring sun,
Smouldering through spouts of drifting smoke that shroud
The menacing scarred slope; and, one by one,
Tanks creep and topple forward to the wire.

The barrage roars and lifts. Then, clumsily bowed
With bombs and guns and shovels and battle-gear,
Men jostle and climb to meet the bristling fire.
They leave their trenches, going over the top,
While time ticks blank and busy on their writs,
And hope, with furtive eyes and grappling fists,
Flounders in mud. O Jesus, make it stop!

—From "Attack" by Siegfried Sassoon

Above: Troops from the Royal Irish Regiment about to go into action at Cambrai.

By autumn 1917, three years into "The Great War," continuous shelling and lack of drainage had transformed the Ypres salient, on the Western Front, into a waterlogged quagmire. In Ireland, meanwhile, a month earlier, Eamon de Valera had become president of Sinn Fein and decided to push for an independent Irish republic. Despite the growing political turmoil at home, in France, on firm ground near the town of Cambrai, the British army's 16th "Irish" Division would again prove to be formidable adversaries for the Germans.

According to the divisional historian, at Cambrai, the "swift and successful operation by 16th Division was a model of attack with a limited objective." In addition to securing 3,000 yards of trench, 635 prisoners were captured from the German army's 470th and 471st Regiments and 330 German bodies were counted in the trenches. More importantly, though, the mayhem caused by the diversionary assault contributed greatly to the initial success of the Cambrai offensive, though the offensive eventually sputtered, dragging the war into 1918.

Cambrai became the field of operations when the British Commander-in-Chief, Field Marshall Douglas Haig, recognising that it was impossible to launch further military operations in the Ypres sector, sought a new battlefield where he hoped success could be achieved before year's end. Lieutenant-Colonel John Fuller of the Tank Corps and General Julian Byng, commander of 3rd Army, recommended that a massed assault by 400 tanks should be mounted across the firm, chalky ground to the southwest of Cambrai. Haig adopted this proposal, confident that the tanks would punch a whole through the mighty Hindenburg Line and allow his underused Cavalry Divisions to break through to the enemy rear.

In order to create maximum confusion among the Germans, Sir Aylmer Haldane, commander of 6th Corps, was ordered to stage a diversionary attack. The area selected for the assault was about eight miles to the northwest of Cambrai, where the British line passed through the villages of Bullecourt and Fontaine le Croissilles. The units selected to make this subsidiary attack were 3rd Division and 16th "Irish" Division.

The defences of the Hindenburg Line opposite 6th Corps positions consisted of Tunnel Trench, a heavily defended front-line trench, with a second, or support trench, some 300 yards behind. The whole area was scattered with concrete machine-gun forts, or Mebus, similar to those that had decimated 16th Division at the Battle of Langemarck three months earlier.

Tunnel Trench was so called because it had a tunnel 30 or 40 feet below ground along its whole length, with staircase access from the upper level every 25 yards. The entire tunnel had electric lighting, and side chambers provided storage space for bunks, food, and ammunition. Demolition charges had been set that could be triggered from the German rear in order to prevent the defences from falling into British hands.

16th Division, attacking on a three-brigade front, was assigned the task of capturing a 2,000 yard section of the trench network. On the right flank of the Irishmen, 3rd Division's 9th Brigade was detailed to capture an additional 800 yards. One unusual feature of the attack was that there was to be no preliminary bombardment as surprise was the key to the success of the operation. Once the assault began, though, 16th Division's artillery, reinforced with guns from the 34th Division, would open a creeping barrage upon the German positions.

The morning of the advance, November 20th, was overcast, with low visibility. At zero hour, 06.20, the Divisional 18 pounder-field guns opened fire, and the leading assault companies sprang from their jump-off positions. At the same time, Stokes mortars began to lay a smoke barrage upon the German trenches in imitation of a gas attack. This deception proved successful, as many German troops donned cumbersome gas-masks and retreated to the underground safety of the tunnel, thus leaving the exposed portion of the trench undefended.

On the left flank, the attack of the 49th Brigade was launched by 2nd Royal Irish Regiment and 7/8th Royal Irish Fusiliers. They quickly crossed the 200 yards of no-man's-land and reached the enemy frontline just as the barrage lifted. Resistance above ground was minimal, and storming parties began the task of flushing the Germans from the tunnel with Mills bombs and bayonets.

Once the tunnel was secure, sappers, acting on information obtained by 7th Leinster Regiment's intelligence officer, cut the leads connecting the demolition charges. Supporting companies then pressed on to capture Tunnel Support Trench, while Divisional support units rapidly wired and made secure the new defensive front in anticipation of German counterattacks.

Only on the extreme left flank did 49th Brigade encounter any serious opposition. In this sector, Company "B" of the 7/8th Royal Irish Fusiliers suffered heavy losses inflicted by concentrated machine-gun fire from Mebus Flora. Nearly one hour elapsed before resistance from this strong point could be overcome.

In the centre, 10th and 2nd Royal Dublin Fusiliers headed the attack of the 48th Brigade. The advance here was so rapid that the Irish found many Germans still wearing gas masks and unable to fight. Two more Mebus, Juno and Minerva, were stormed and many more prisoners taken, particularly by 10th Dublin Fusiliers which captured 170 Germans.

Leading the attack on the right flank was 6th Connaught Rangers and 1st Royal Munster Fusiliers, both of which belonged to the 47th "Irish Brigade".

After capturing their assigned section of Tunnel Trench, two companies of Rangers pressed forward to assault the strong points known as Mars and Jove. The Division had learned from the disastrous frontal attack made at Langemarck, and so the Rangers worked around to the rear before pressing home with the bayonet.

Unfortunately, 3rd Division had failed in its attempt to capture the trench network immediately to the right of 16th Division, and the flank of the Connaught Rangers was thus exposed to a savage counterattack. The Rangers ferociously engaged the Germans and used captured "potato masher" grenades brought up from the tunnel to great effect. Eventually, overwhelming numbers began to tell, and "A" Company was forced to yield Jove and fall back upon "B" Company, which was holding Mars.

These two isolated companies doggedly held their ground for several hours. The situation only improved when the Divisional pioneer battalion, the 11th Hampshire Regiment, dug a communication trench across the fire-swept no-man's-land, thereby allowing the support companies of the Rangers to come to the aid of their comrades. The front was finally stabilised three days later when 7th Leinster Regiment recaptured and consolidated Jove and successfully assaulted the untaken section of Tunnel Trench.

On the first day of the Battle of Cambrai, General Byng's eight attacking Divisions achieved complete surprise and pierced the Hindenburg Line, driving the Germans back four miles toward Cambrai itself. Having captured 8,000 prisoners and 100 guns for the loss of only 5,000 British casualties, it was small wonder that church bells were sounded in celebration in Britain for the first time during the war.

Unfortunately, Byng lacked sufficient reserves to exploit, or consolidate his success, and German counter-attacks, launched by some 20 Divisions, recovered most of the lost ground. Although the battle ultimately ended in failure for the British, the willingness to employ new weaponry and tactics at Cambrai and during the diversionary assault upon Tunnel Trench, pointed the way to the final victory in 1918.

Although the capture of Tunnel Trench contributed greatly to the early success at Cambrai, it proved costly as 6th Corps had suffered 805 casualties. Most of these occurred close to Jove Mebus, where the Connaught Rangers had engaged the enemy in hand-to-hand combat.

Perhaps an idea of the ferocious nature of this form of trench warfare can be gleaned from Father William Doyle, chaplain of the 8th Dublin Fusiliers, who had once remarked, "We should have had more prisoners, only a hot-blooded Irishman is a dangerous customer when he gets behind a bayonet and wants to let daylight through everybody."