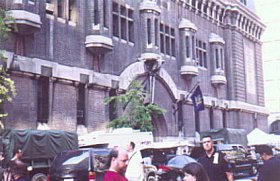 PART 1 IN A FOUR-PART SERIES

69th New York veteran Vic Olney, the volunteer manager of the 69th armory's Officers Club, observed the battalion's soldiers last week as they returned from duty in and near "The Pit" created by the collapse of the 110-story twin towers of Manhattan's World Trade Center. Here's what he saw and heard.

(Left: WGT Photo/Gerry Regan
A view of the Lexington Avenue (main) entrance of the 69th Regiment Armory on Sept. 13, the day it became the city's command center for family and friends seeking missing persons.)

Garryowen to all from Manhattan,

We are fine and thank all of you who sent messages asking if we are OK and we thank you for your concern and your messages and prayers.

We live at 16th Street and 1st Avenue (Stuyvesant Oval) about 3 miles from the World Trade Center. I used to look out my home office window and see the top of the North Tower of the World Trade Center -- but no longer. Our neighborhood is sometimes called "bed pan alley" because of the great number of hospitals, including Bellevue, so the sound of sirens has been with us since 9 this morning. There are convoys of as many as 15 ambulances, some from neighboring States, rolling into the hospitals, including the big VA (Veterans Administration Hospital) on 23rd Street.

My buddy Jack, who works 2 blocks away from the WTC [World Trade Center], walked to our place covered with white soot so he took a shower here and got a new shirt, then Barbara, Jack, our other friend Bob McKenna, and I went to lunch at one of the neighborhood pubs, which was packed. People quietly watching the blazing TV screens sipping a beer and looking as dumbfounded and shocked as we four. Jack is bivouacking with us as there is no train service.

Jack and I then went to the 69th Armory to help out as the Fighting 69th has been activated, along with the 105th Infantry, which is also located in our Armory. A few other Vets came in and set up coffee and made sandwiches for the men -- our steady volunteer Bob Davis already had the Officers Club open and he gave out all the soda, water and snacks we had to the soldiers and had the TV on. We put all the "other items" away as the bar itself will be closed, as the men are on duty for I would guess at least a week.

Some of the 69th and N.Y. Guard Soldiers had independently reported to the WTC and helped in recovering bodies -- they were easy to spot by looking at their ash-covered boots, uniforms and faces. We were told some pretty horrible stories of what it is like down there -- no war zone could possibly look as bad, and the carnage is immense. At least 200 NYC Firefighters and 90% of the whole day shift from the 1st Pct is missing (65). [EDITOR'S NOTE: The count as of Sunday, 4 p.m. EDT, was more than 300 firefighters and dozens of police officers missing, among the more than 5,100 total missing and killed in the terrorist attack on the World Trade Center.]

At about 9 PM, ... eight city buses rolled in front of the Armory and the 105th and Company E of the 69th went out to assist in rescue and recovery. The rest of the 69th is awaiting a mission, and it is the guess that they will go in tomorrow to relieve some of the workers in the gruesome search.

Bob Davis volunteered to stay the night in the "O Club" -- serve water and keep the Club open so the men can watch the latest on the TV and I will go in early to relieve him.

The 69th Armory is locked down -- no one in nor out -- except for the Soldiers and a few volunteers. They had to turn away so many who just showed up to see if they could help in some way -- ex-servicemen (one former PFC in uniform), 69th Vets, Government employees, soldiers from other Units who can't make it to their own Armories and assembly points as Manhattan is now a real island -- closed down to traffic. I had planned to head down to our NJ (New Jersey) residence tomorrow morning but I guess that is on hold as the tunnels are closed.

I don't have any answers to the questions we all have and just pray that our rescue personnel are able to save as many as possible. I feel mostly for the families that are right now awaiting a phone call from a missing loved one. I worked in Wall Street for 33 years and wonder how many of my old friends are now gone. With 50,000 people in the WTC on any given day I would guess that the toll will exceed many thousands.

It is Wednesday afternoon and I have just returned to the 69th Armory -- Bob Davis stayed overnight, and we are taking 12-hour shifts -- not really doing much; giving out water, making ice, emptying garbage bags and ash trays, lighting a cigarette for a soldier, securing the O Club and staring at blank faces in white-powdered uniforms who grab a bite to eat and fall asleep in corners, on tables, in chairs and on cots and on anything with some softness on the drill-shed floor. The TV blazes away with repetitive stories and the sound is -- silence! No one talks; these young faces have seen things that would make a Medical Examiner barf -- they will rest for a while and rotate, the 69th relieved the 105th and the 228th relieved them -- and this cycle will continue.

A little cheer and smile comes from those still semi-awake when the TV says they have found a survivor. The silence returns -- no sirens, no planes, no traffic, no phone ringing -- the streets have many people, all walking slowly (some crying) -- shops are closed and there are lines in front of the Supermarkets and food shops.

It is 1:30 PM and I have walked home to retrieve our messages, have a sandwich and then return. The wind has shifted from the south and the smell is pretty bad, so I will close the windows and turn on the air; Barbara is at work at Baruch College -- right across the Street from the 69th Armory, and she will come by after work but she will have to get the guard mount come and get me as she will not be allowed entrance. Military Security is tight.

The all-volunteer NY Guard has assembled and is on reserve status awaiting a mission -- this is so monstrous an event that I am sure they will get one as the rescuers cannot continue to work so hard without rest time.

Over the next few days, I will hear many stories from our 69th, NY Guard and Soldiers from other Units; the little ones I have heard so far are horrific.

I pray that the God of us all is a just but vengeful God and that he will give this President and our Military Forces the courage and fortitude to deliver an everlasting blow to these enemies of humanity -- who hide behind the cloak of religious zealism. It must be a response so powerful and devastating that [it] will make all remember the words of one of our greatest Presidents, Theodore Roosevelt (born right up the street) who said "Walk softly, but carry a BIG stick!"

I am, as always, proud to be associated with the 69th (and all our rescue and recovery people) -- these young Soldiers do not consider this as more than doing their job. Thank God I am too old; I don't think I would be able to view what they have seen and to touch what they must pick up.

The rescue and recovery response is beyond comprehension. ... They really have to hold groups back in Battery Park as only so many can work at a time safely under such inhuman conditions.

Thanks again for all of you who have thought of us -- we are fine -- we all know whom we must remember, pray for and honor. We will probably be out of touch for a while -- we are fine.

It was only last week that I ended our e-mail with a "say thanks to a soldier" note.

The late Vic Olney, the proprietor of Tara Hall was a veteran of the 69th New York, and the volunteer manager of the armory's Officers Club. Vic graciously allowed WGT to reproduce these dispatches in 2001, which he previously sent to all on Tara Hall's e-mail update list.

Read Taliban by Ahmed Rashid for a look into a world that remains largely closed to American eyes.