CÉADAOIN -- On Sept. 21, 1827, Michael Corcoran (left), a brigadier general in the Federal Army during America's Civil War, was born in Carrowkeel, County Sligo. Corcoran served as a policeman in the Royal Irish Constabulary but resigned during the Great Hunger, no longer able to condone the repressive actions of that police force against the starving Irish. He emigrated to New York and found work in the city's employ while also joining the 69th New York State Militia as a private. He rose through the ranks to colonel commanding the regiment and won the hearts of the city's Irish population when he refused to parade the 69th 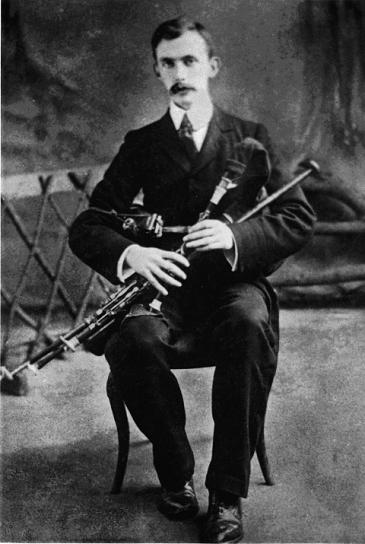 CÉADAOIN -- On Sept. 21, 1881, revolutionary Éamonn Ceannt (Kent) (right) was born in Ballymoe, County Galway. He was educated at University College, Dublin, and worked on the clerical staff of the Dublin city council. Éamonn joined the Gaelic League in 1900 and later taught classes in Irish. Ceannt was a pipe player, once playing the uileann pipes for the Pope in Rome. He was said to love the language, music and dance of his native country and to have an unshakeable commitment to Irish freedom. Ceannt joined Sinn Féin and the Irish Republican Brotherhood in 1908. He was also one of the founders of the Irish Volunteers in 1913, and was elected to its Provisional Committee. The day before the Easter Rising in 1916, Ceannt was one of the seven signatories to the Proclamation, in effect, signing their death warrants. During the Rising, he commanded the area of the South Dublin Union. The plan called for him to hold the area with 1,000 men; he had only 130, but his small command, especially Cathal Brugha, resisted the British until Patrick Pearse surrendered the entire rebel force. Like the other leaders of the Rising, Éamonn Ceannt faced the kangaroo court that condemned him with his head held high. On May 7, he wrote his wife a note, telling her, "I shall die, like a man for Ireland's sake." On May 8, he was put up against a wall in Kilmainham Jail and shot.

SATHAIRN -- On September 24, 1798, United Irishman Bartholomew Teeling was executed in Dublin. Teeling was the son of wealthy linen merchant in Lisburn, County Antrim. His father was involved in both the Defender and United Irish movement and Bartholomew and his brother joined him in the Defenders while still teen-agers. Bartholomew traveled to France with Theobald Wolfe Tone in 1796, when he was only 26. In August 1798, Teeling, along with Wolfe Tone's brother, Matthew, accompanied French General Joseph Humbert's landing in County Mayo. Teeling performed admirably as an aide-de-camp to Humbert during the actions in Ireland. At the battle of Carricknagat, outside Collooney, on September 5, Teeling helped turn the tide of battle in favor of the Franco-Irish by riding directly up to a British cannon whose gunner had been doing terrible damage to them and killing him with his pistol. As he dashed back though a hail of musket balls he was given a hero's welcome by the Franco-Irish soldiers, who soon after routed the British. Three days later, when Cornwallis and Lake finally cornered Humbert's outnumbered army at Ballinamuck, Teeling managed to escape briefly, trying to avoid the death sentence he must have surely known awaited him. He was captured shortly afterward, however, and was hanged at Arbour Hill barracks, along with Matthew Tone. Today a street in Sligo town bears Teeling's name, and in 1898 a statue of Teeling was erected at Carricknagat